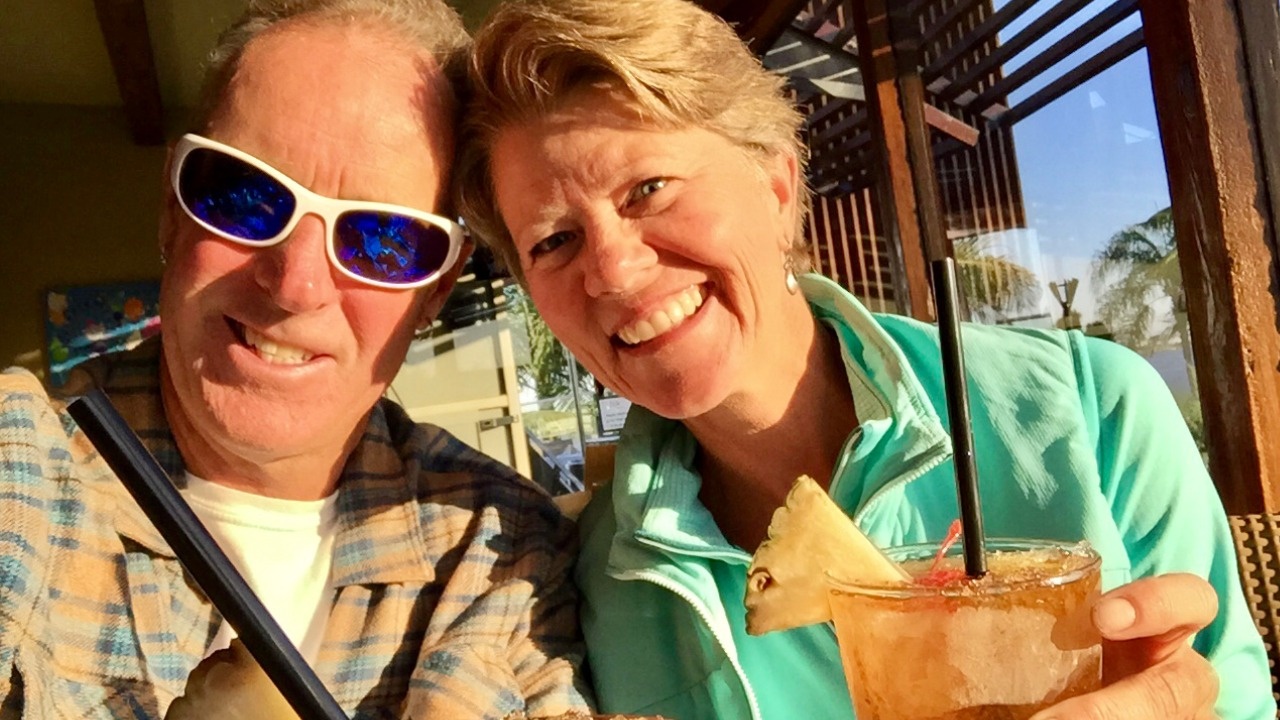 When this sailing dream was new and fragile, I probably talked about it a little too often.

The common concerns I inevitably heard voiced—storms, rogue waves, and a variety of scenes that all led to sinking—I had carefully prepared answers for. Besides the technical marvels of satellite weather forecasts, life rafts, and EPIRBS to help ensure our survival, I truly believed that statistically we were far safer on the ocean than on the freeway. While it didn’t always work to convey this to others—mathematics and the subconscious speak mutually unintelligible languages—at least I felt solid with my position.

Then someone would ask, ‘Won’t you be lonely?’

This question always stumped me. I had no idea, and it worried me. When Colin and I cast off the dock lines, would we enter a black hole where the light of human contact couldn’t penetrate? If you know me, you’ll know that while I’m a bit of an introvert by nature, I adore people. Love them, love them, love them. And if you know Colin at all, you’ll know that he lives for people. His greatest genius is people. You’ve never seen the man more happy and glowing than if you place him in the middle of a crowd, and you’ve never seen the crowd happier either.

Were we insane to consider leaving our comfortable, happy, friend-filled lives?

Human beings are an inherently tribal species. Jaguars, pandas, polar bears? Not so much. Once the cubs of many animals learn how to fend for themselves, they’re off to live the rest of their lives mostly alone. One can only assume that a platypus doesn’t feel lonely day-to-day or else Mother Nature has played a terrible trick. Same goes for tigers, black rhinos and ocelots. But homo sapiens survived more effectively when part of a group, and thus the neuro-pathways that encouraged affinity grew especially strong. Biologically as well as psychologically, we feel a deep, existential need for belonging.

Could Colin and I possibly get that need met and yet always be on the move?

From the day I started sailing, I’ve been amazed by what a tribe sailors are. You mention to the right person you enjoy being on a sailboat and you’ve unknowingly given the coded handshake. Suddenly, you’re welcomed inside this secret society you never knew existed, like the Freemasons or Yale’s Skull and Bones Society. Strangers become immediate friends. Friends become family. Conversations turn to boat designs, racing mishaps, symmetrical versus asymm kites. To anyone else, it must sound like Mork suddenly switching from English to Ork.

Yet for all that fellowship of sailors, it turns out cruisers have them beat by a nautical mile.

We should give this a little context. Experienced cruisers have 20,000 nautical miles under their keels. If not a circumnavigation, then an ocean crossing or two. Truly amazing cruisers have 100,000+ miles. After bopping up and down SoCal, when Colin and I arrived in San Diego, we celebrated our baby cruiser milestone of 1,000 nautical miles. The California Coast isn’t exactly Cape Horn, but nor is she a timid stretch of water. As fledgling cruisers, we did the only possible thing and headed for the nearest happy hour.

Lo-and-behold, we found that cruiser community to welcome us with open arms. We shared drinks and stories with several folks who had sailed the South Pacific thirty years ago when a sextant was at the high end of technology and GPS and chart plotters were barely a glimmer in the Department of Defense’s eye. They could have looked at us and seen latecomers who had it easy. Instead, they cheered our miniature milestones and were genuinely excited about the next steps of our journey. They shared every bit of advice they could think of.

Think about that for a second. How often in the modern universe do you meet strangers and immediately become great pals? In Dana Point we’d had a cruiser gift us a flamingo bulldog clip (boat multi-tool par excellence), a list of favorite anchorages in Mexico, and boat song lyrics. And in San Diego, the cruiser community was far from done with us. A boat neighbor gave us the skinny on anchoring options. Another gave us a ride to pick up more zincs. A trio of cruisers spent nearly an hour helping us choose a marina, find gear we needed and figure out creative solutions for items we couldn’t source. At least a dozen people gave us cards and said “Really, if you need anything when you get to Mexico, please call.”

Perhaps because you have to be so self-reliant on a boat—the 21st century’s answer to the Wild West—the same person who might drive by a car with a flat tire knowing AAA is a phone call away, will jump in and turn their lives upside down to diagnose an engine problem, dig up a spare part, or catch a dock line. Also, maybe because the journey part of cruising is such a solitary activity, cruisers flock to each other when they reach a destination. A boat no sooner drops anchor than sundowners are poured and neighbors putt by in their dinghies, talking fish/gear/tides/anchorages/weather/food, feeling affinities and quickly becoming friends.

Cruisers are a diverse lot—economically, socially, geographically, politically and physically—but they accept all-comers like long-lost friends. It’s a bit like when a dog gets to a dog park. It doesn’t matter if he’s been going for years or is the new canine on the block, whether he’s a dachshund or a malamute. He’s a dog? He’s in. When cruisers recognize a fellow cruiser, tails start wagging double-time.

Practically, of course, this community was enormously helpful for us in San Diego. But at the end of one milestone and the beginning of a new one, at the time of a very emotional memorial service Colin attended, as we prepared to leave not just our friends but our country, familiar places and language behind, it was deeply emotionally fortifying. We belonged. 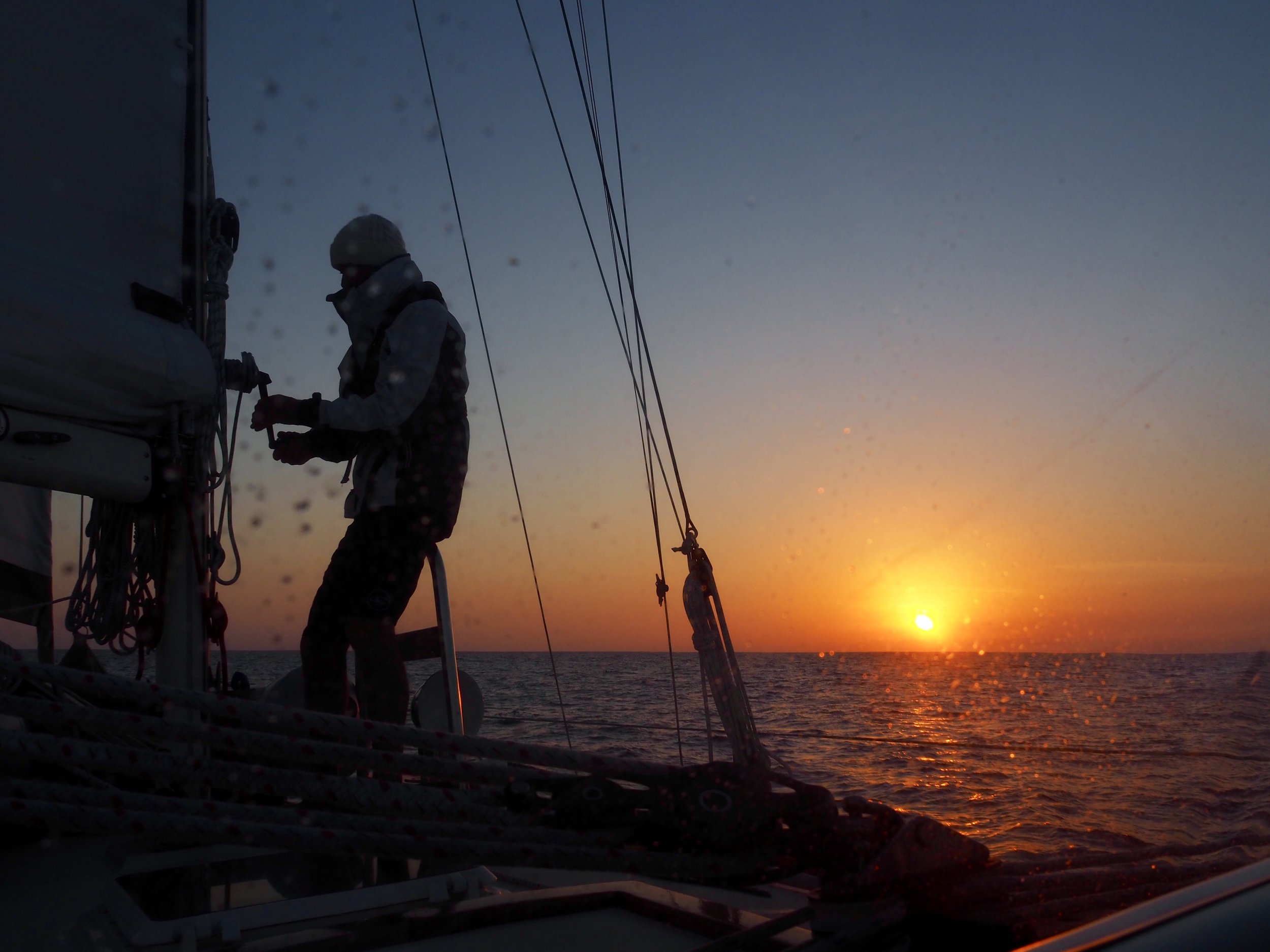 Colin, reefing the main at sunset for an easier overnight passage from Dana Point to San Diego. 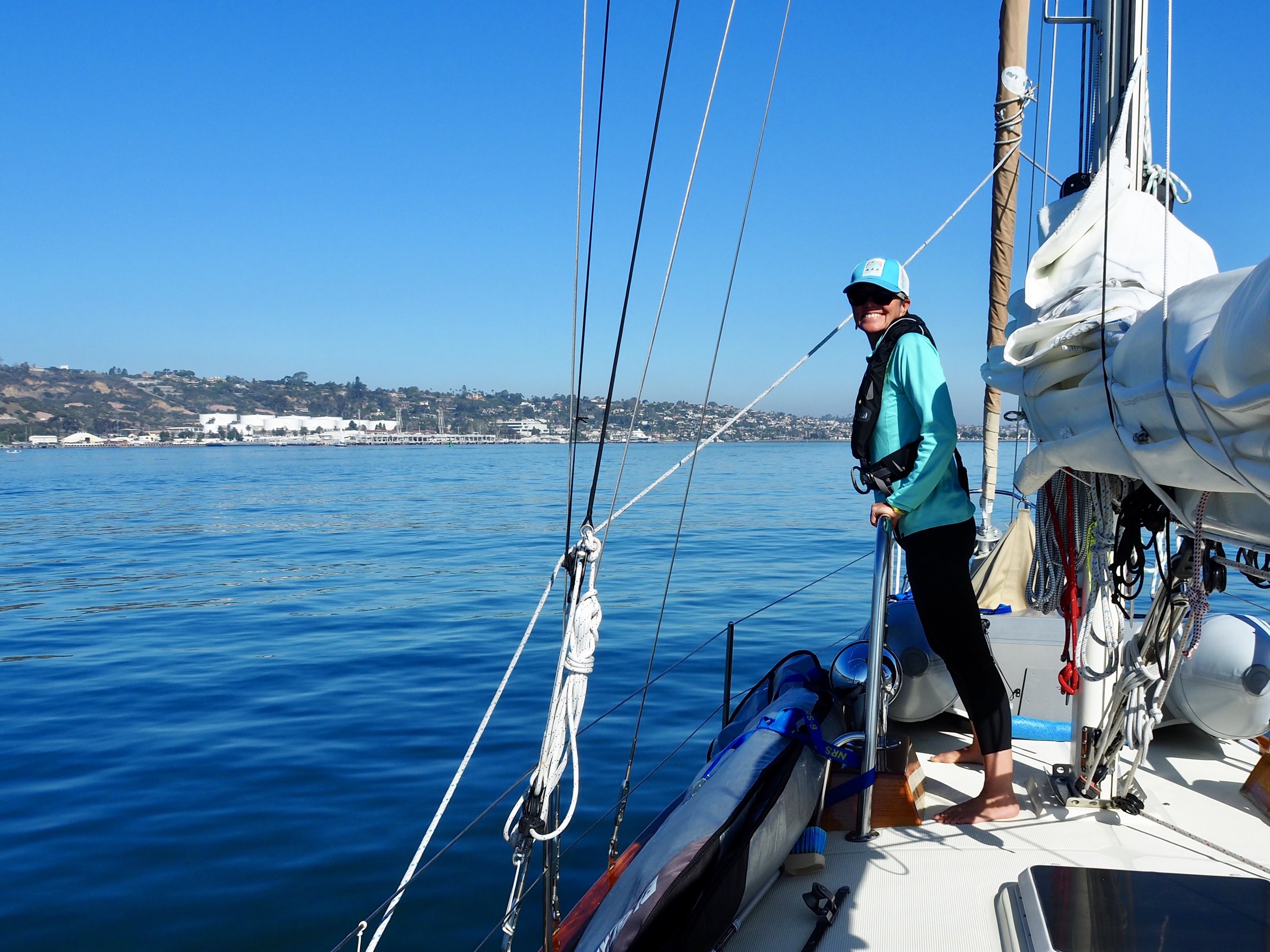 The best part of an overnight passage is a morning arrival. 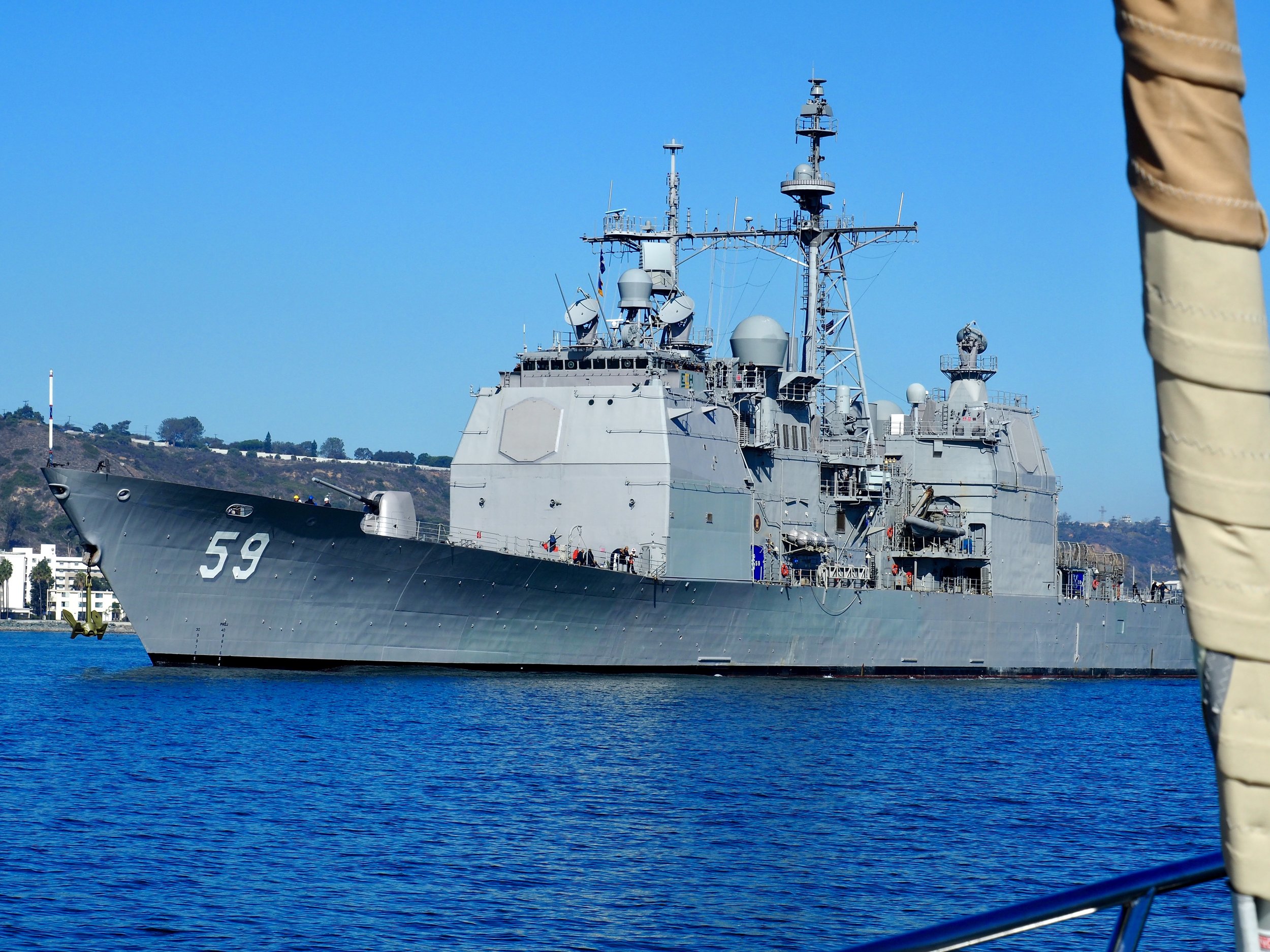 We must have scrambled to write down the live fire coordinates broadcast by Warship 59 at least a dozen times on our various journeys and here she was, passing us in the San Diego channel. (Guns silent, thank goodness.) 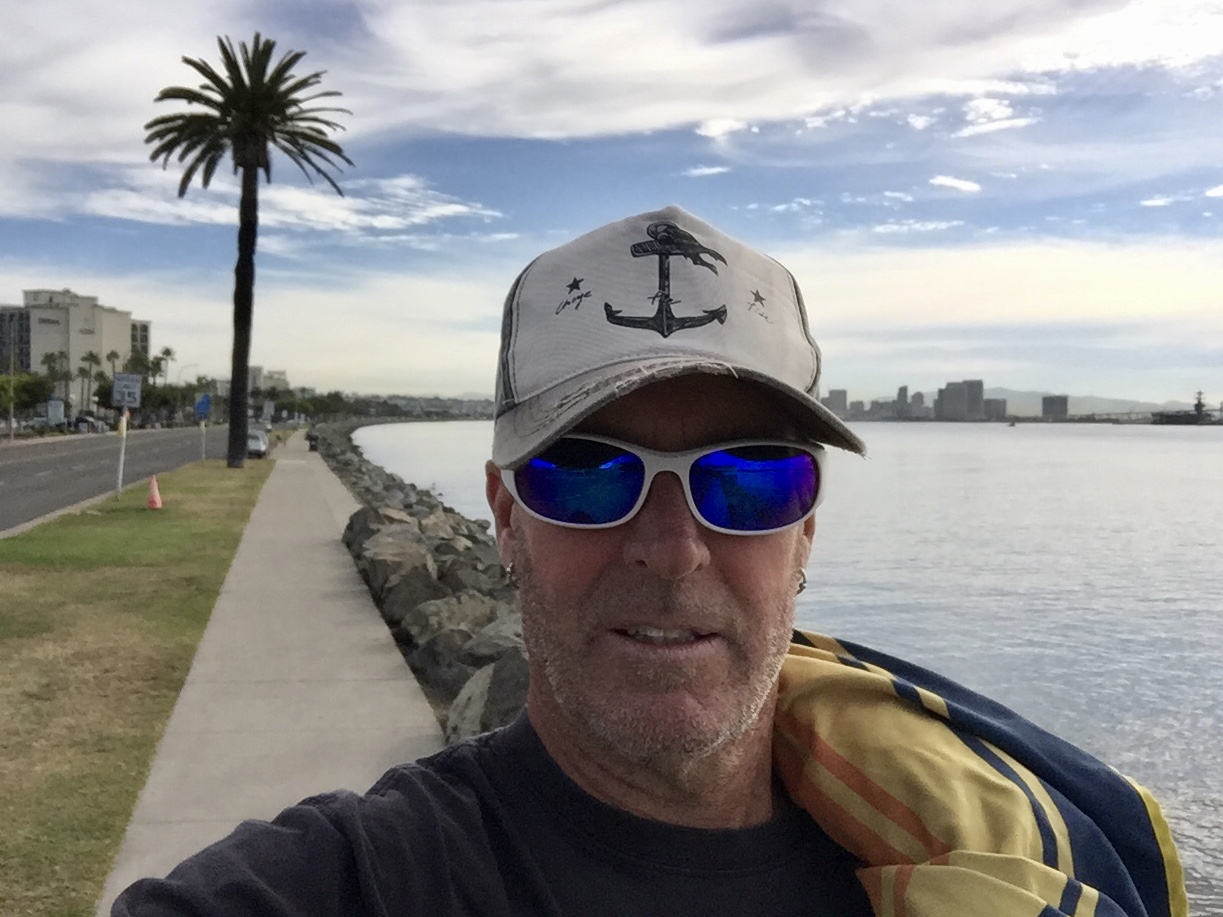 We’re still in San Diego, but not for much longer. Winter is catching up with us, even down here. With apologies to everyone not on the equator, we figure if we can see our breath at night, it’s time to point the bow south and hoist a sail or two.

So next up, Mexico! Specifically, our intention is to check into the country in Ensenada, stock up on a few things and then head out pretty quickly for more remote locales in Baja. It will be our first border crossing, and the fact does not go unappreciated that while thousands will put their lives at risk to cross north, the entirety of our challenge to the south comprises showing up with a passport and saying we’d like to come in, por favor.

Speaking of which, we’re working on our Spanish and reading our history books and are really jazzed for the opportunity to gain a much deeper understanding of the fascinating U.S. neighbor to the south.

Also—hopefully—whales and turtles and tunas.

Massive thanks to Mark for the drinks and inspiration, to Doug and Claudia for the ride and many offers of help, to Eric and Sue of SV Ti’ama for the support and friendship, and to Alberto of Sea Horse Diving Services for being one of the friendliest and most professional folks we’ve ever had scrub Pristine’s nether regions.

Thanks also to Val for the visit, the tacos, the stories of the past (not sure I wanted to know all the ways Colin could have died, but thanks anyway), the present talk of humans and all their foibles and the whiskey (!). When we reach Abreojos and find you stowed away in the surfboard bag, we promise a few waves before you have to walk the plank. 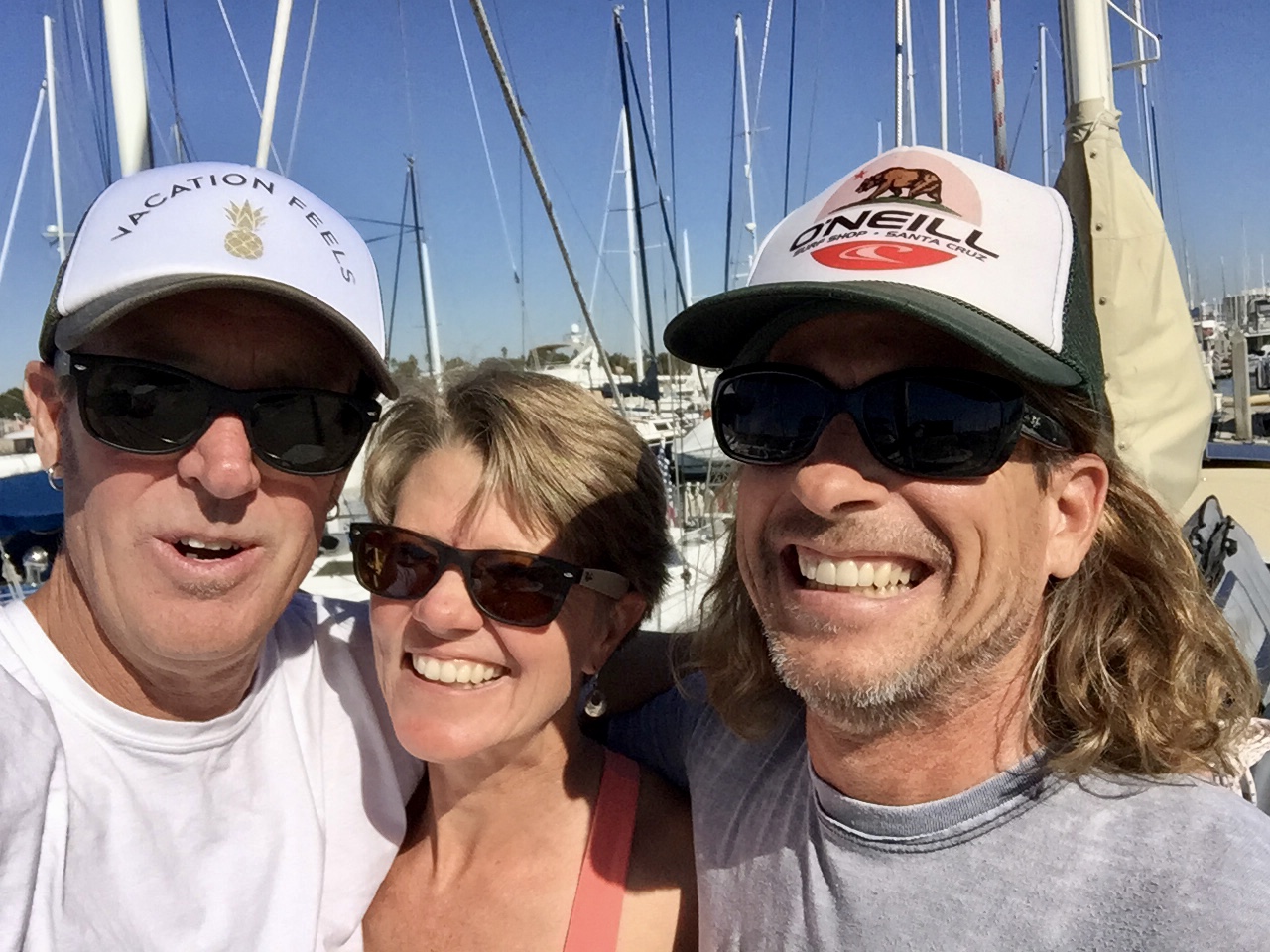 The swell was down, but these two surf doggies were still wagging their tails 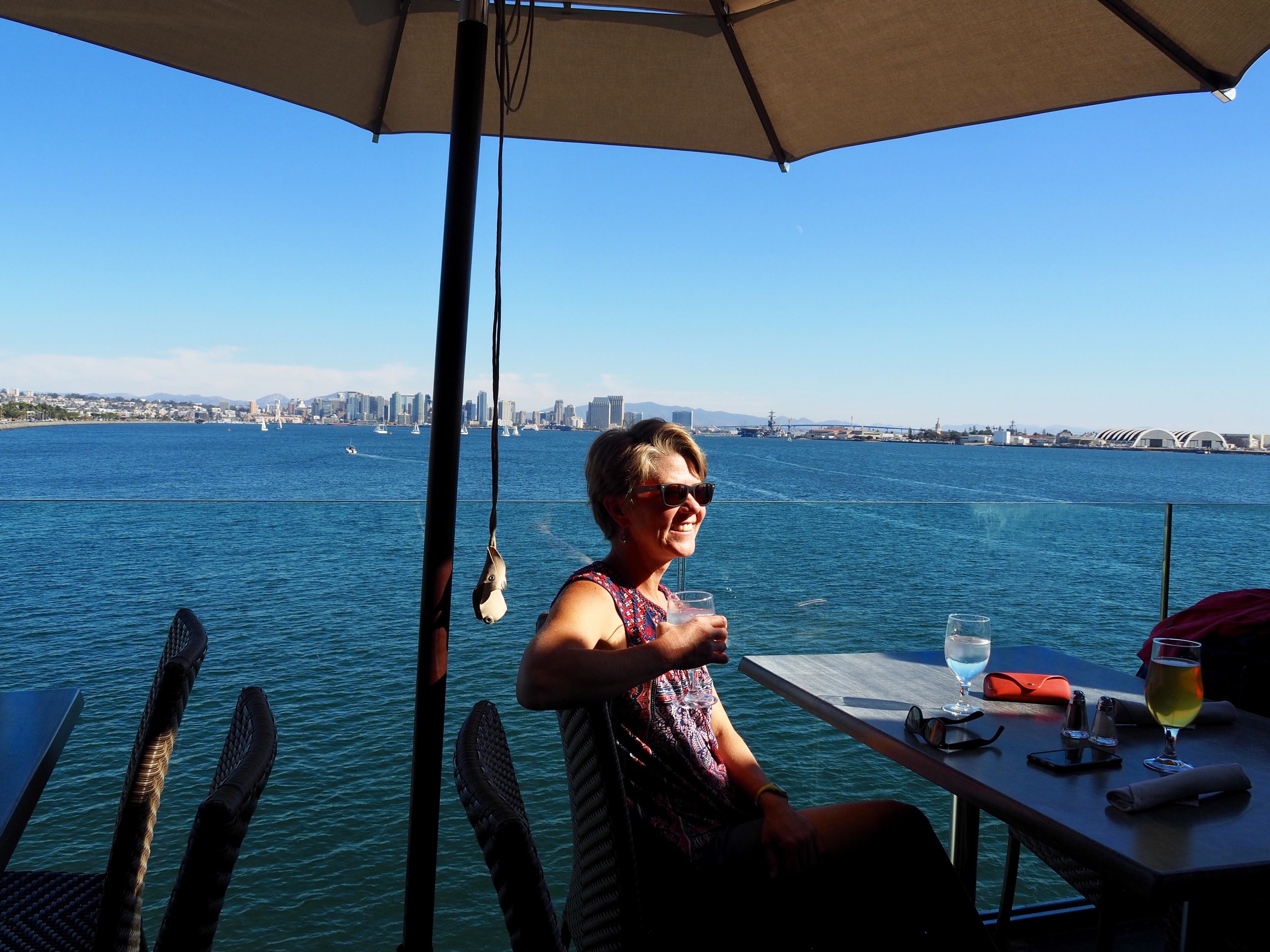 My happy place was eating a feta and bacon burger at Tom Ham’s Lighthouse and watching other people sail. 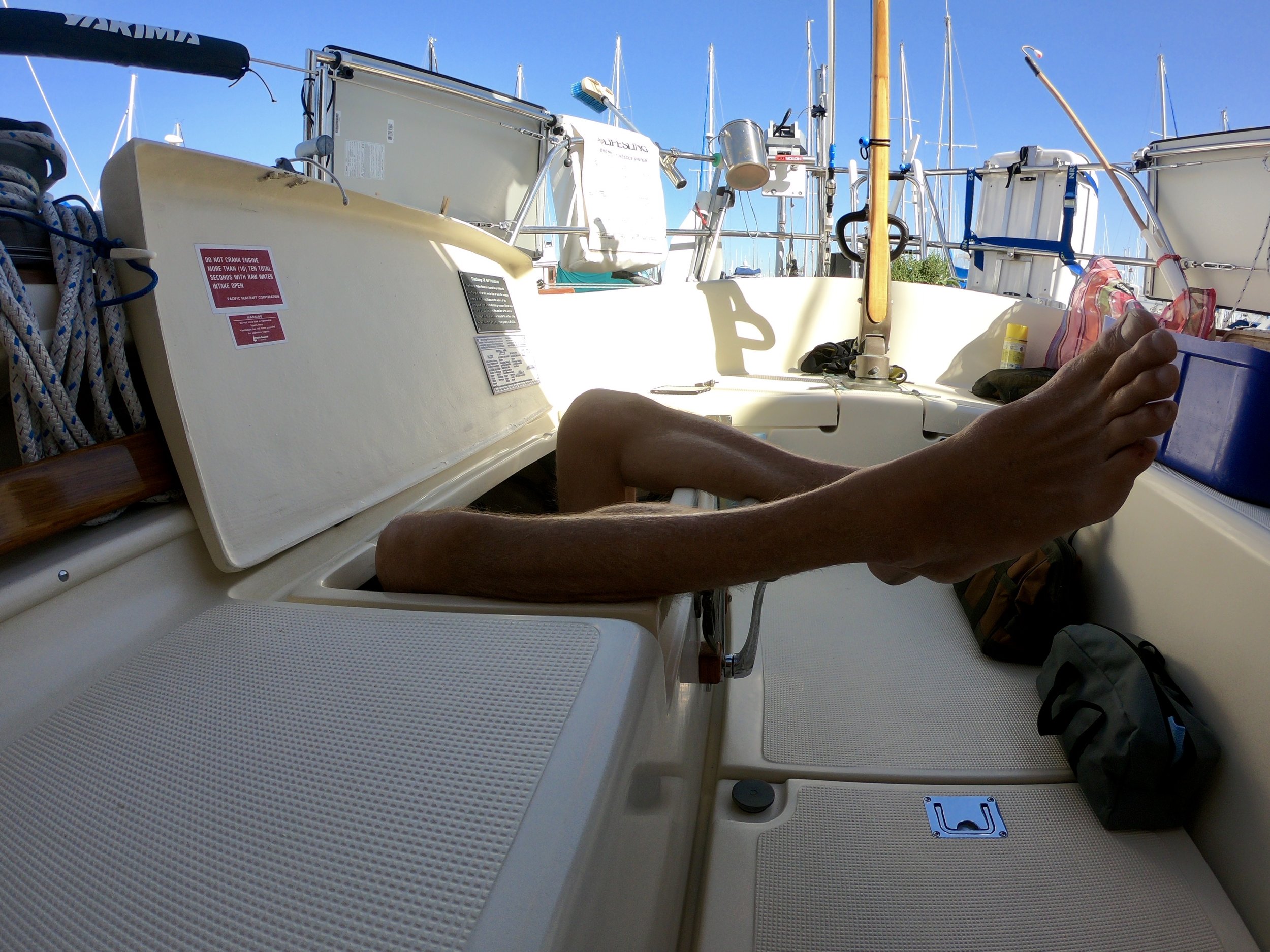 Too many mai tais? Colin’s attempt at a man cave aboard Pristine? Or maybe the only way to replace the glow plug in the diesel heater. You be the judge.