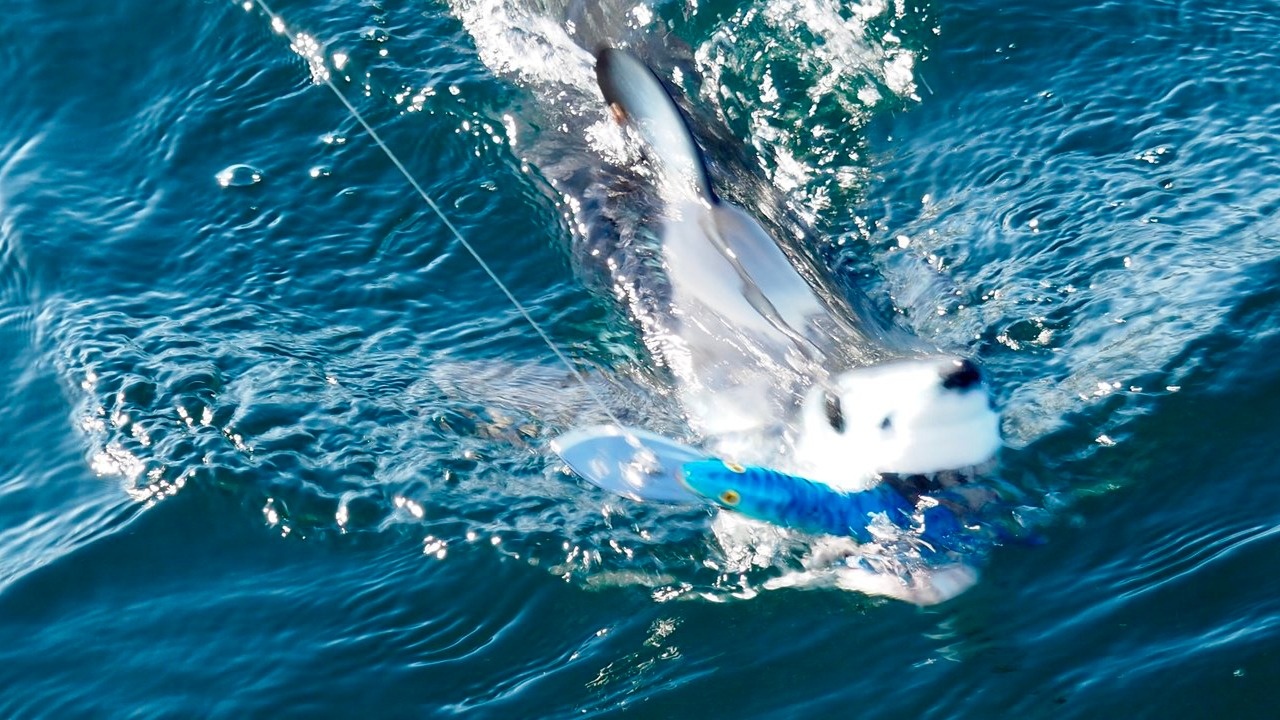 The trolling line, which had been quiet since we left Santa Cruz Island, suddenly screamed into life like a swarm of angry bees.

He’d been up at the bow, pointing at the eruption of wildlife all around Anacapa—pods of dolphins circled, seals leapt from the water, and pelicans dove all around as the sea boiled with fish. Ominously, a seagull carcass had floated by minutes earlier, feet up. Predator and prey, the ocean was alive with activity, proving everything we’d read: The Channel Islands are truly the Galapagos of California.

Now it was our turn to get in on the action. As Colin ran back to the stern to grab the pole, adrenaline flooded my body. He’s been fishing all his life, but I’m pretty new to the idea of pulling dinner out of the ocean on a hook. The entirety of my previous experience included a trip to Frontier Village when I was five and became so frustrated by the little wrigglers flapping back into the stocked pond, I created the novel fishing technique of sitting on them.

This time, the pond was much bigger, and I tried to make sure I didn’t screw up the single task in my charge: shift the engine to neutral. That accomplished, I ad-libbed my next role and grabbed the camera.

“It’s a fighter, all right,” Colin said as he let it run, then reeled, then let it run again. I tried to steady myself to take glory shots of the bluefin tuna or the mahi mahi, but my heart was pumping way beyond what was appropriate. I love meat. My body craves it, but I am also an animal lover (fish included) and I was notably feeling the paradox.

”I think it’s a mako shark,” he said as he pulled it closer. When I didn’t respond, he guessed correctly at my nonexistent shark education. “Good eating,” he added, so I nodded, wondering how on earth one cooked a mako.

Turned out, once he pulled the lure to the stern, my lack of mako recipes was irrelevant.

And there I was, staring into the black eyes, pointy nose and wide open mouth of a baby great white. No doubt about it. Even I, cartilaginous novice that I am, didn’t need an identification book to be rock solid on the taxonomy.

It looked exactly like the creature seared into all our adolescent minds by Jaws—only it wasn’t the full-scale model.

He (random gender assignment) was around five feet long from his nose all the way to his thrashing tail, but his girth was shockingly wide. He looked weirdly like a muppet with his mouth wide open, taking up his entire face. But he was a freaking great white, and he wasn’t happy to be stuck on our lure.

Oh my God, I thought, seeing how he dangled vulnerably from the lure. The poor baby! We have to help it!

Then the survivalist part of my brain kicked in, in a raucous debate with the softie Berkeley liberal. Your muppet has rows of razor-sharp teeth, you idiot. He may be a baby, but he’s a freaking great white shark baby! If you bring him aboard, you’ll lose a foot!

But it’s still a baby! My empathetic side wasn’t done. It’s in pain. We’re hurting it!

Are you insane? What are you going to do—sit on him while Colin sticks a hand down his throat?

Frontier Village had not prepared me for this moment.

Luckily, while I was stuck in an internal hunter-pacifist tug of war, Colin grabbed the gaff hook and freed our great white with no fingers or toes lost.

Our baby shark will probably carry a small scar from his encounter with Pristine, but he’ll live to grow big and haunt our nightmares for decades to come, hopefully achieving his full 60 year lifespan.

Amid the action, I couldn’t breathe, but I did somehow press the shutter button a few times. The result, as far as proof goes, is something akin to the Loch Ness monster shots, but blurry and all, the photos give you a hint of the excitement. 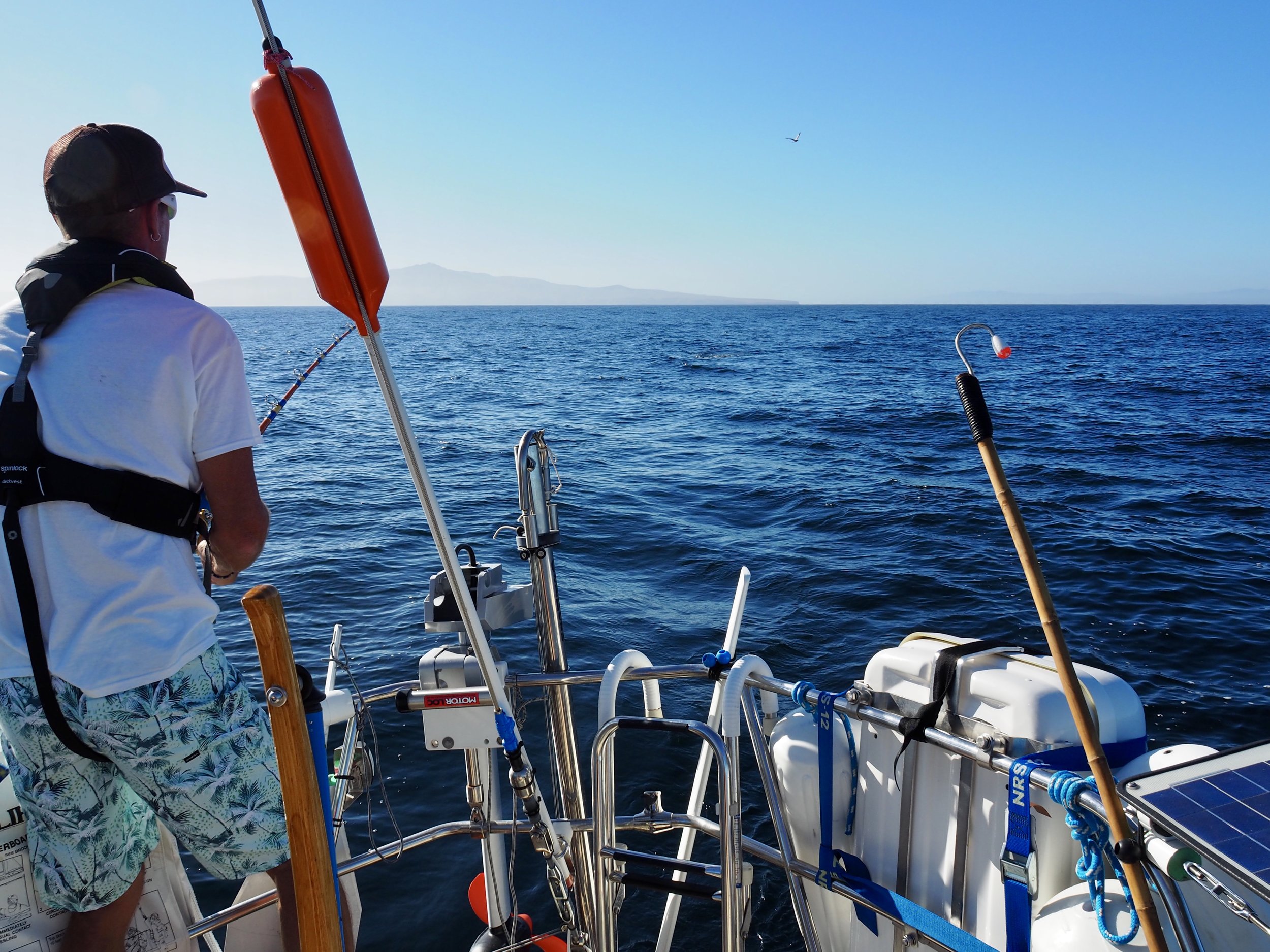 Colin reeling away, back when we thought we might still have dinner on the line. 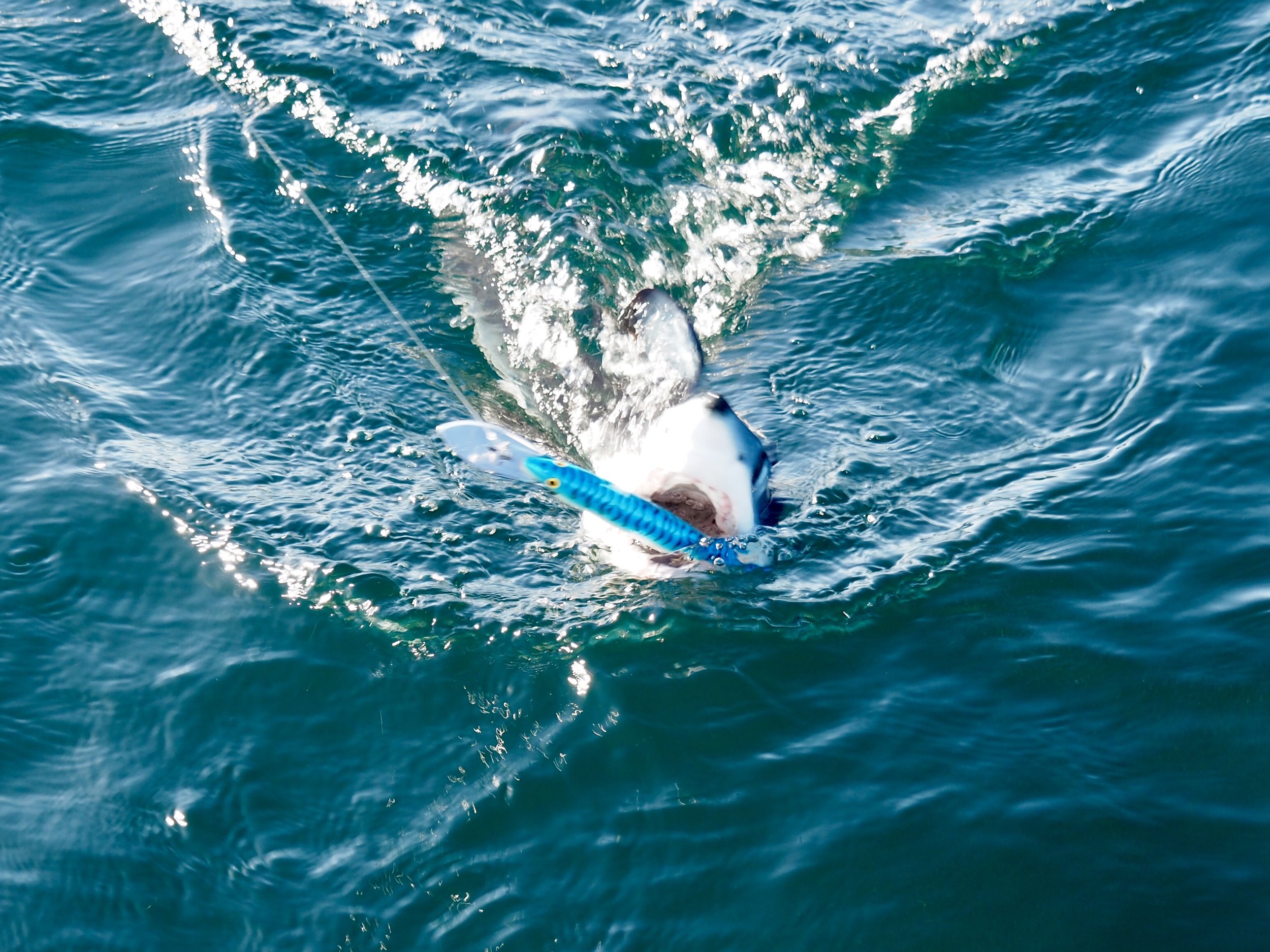 Instead, we’d caught this guy. From this angle, don’t you see the cute little muppet baby? 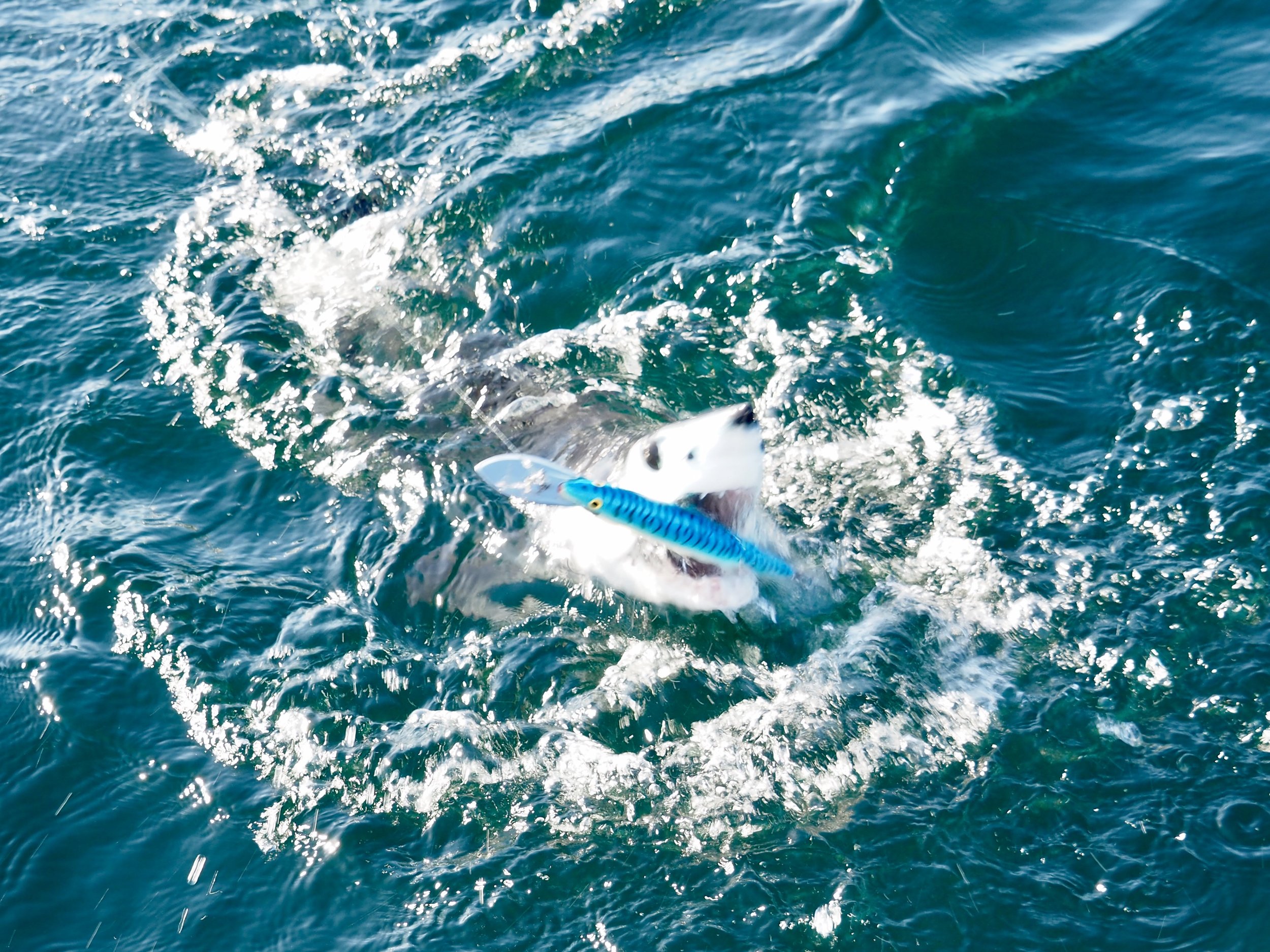 But from this angle, he looks less cuddly, right? See those teeth? 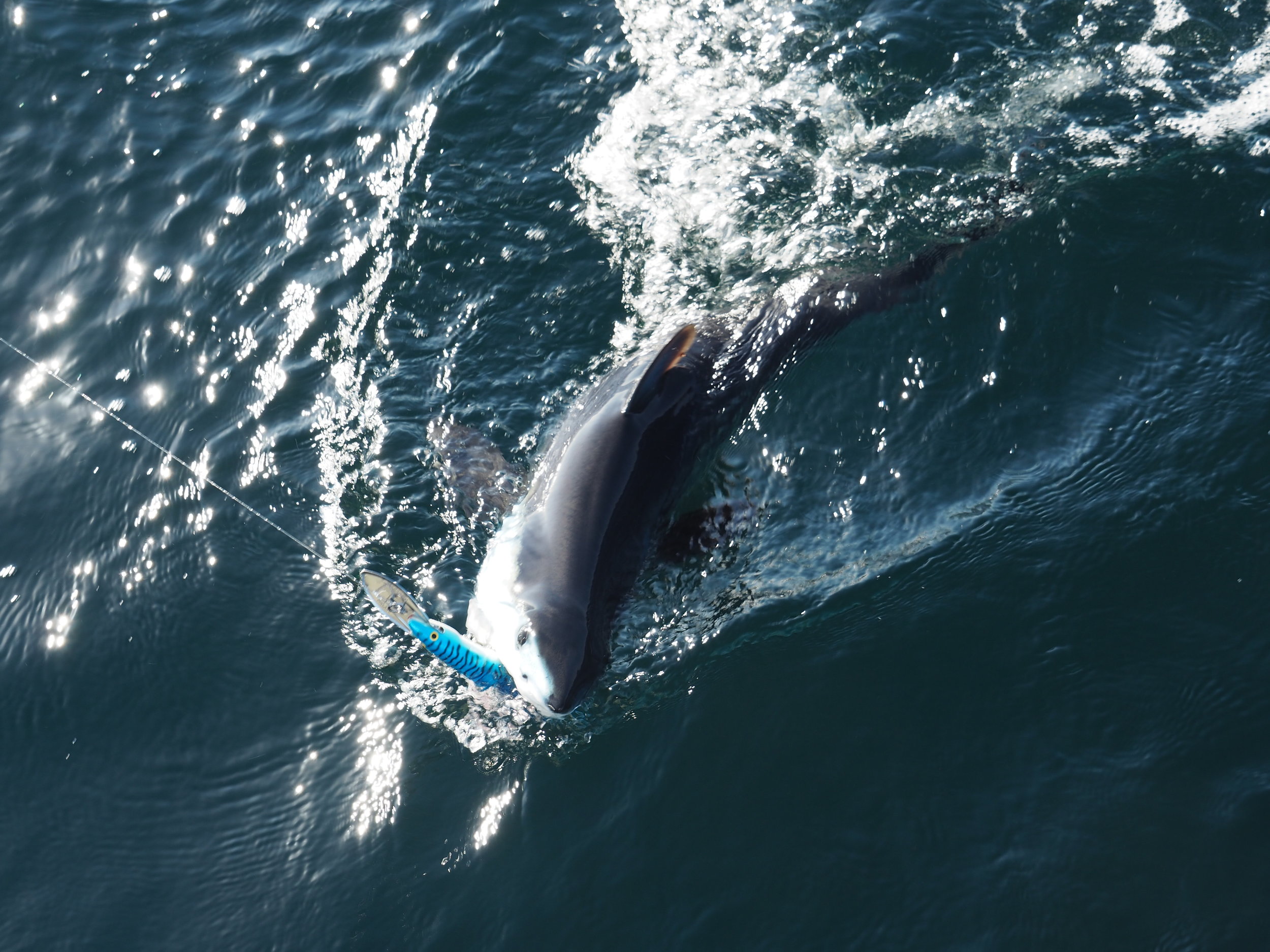 In this shot, you get a better sense of his length. For reference, that lure is 8 inches long. Since they're born at an average of 5 feet long, this one must have been practically a newborn.

We compared these photos to every reference we could find as well as talked to some professional fisherman and are pretty confident we identified the species correctly, but please let us know if you have greater expertise and see something else.

Meanwhile, we tried to learn what we could about our fanged friend, but despite great whites occupying televisions 24x7 for an entire week each year, not so much is known about their babies—technically called pups—because to this day no one has ever witnessed a great white birth, and some researchers go a lifetime without ever seeing a baby.

What little we know is after about a year of gestation, they hatch from eggs inside their mother, feed on their brother and sister eggs (you thought your siblings were tough on you?), and are then born live.

The smart ones immediately swim swiftly away from mama, lest they become prey. Clearly, sharks are the original dysfunctional family, but when they can’t eat each other, the little guys make do with fish until they’re big enough to take down nice fat seals and sea lions, their ultimate meal of choice.

I gotta say, terrifying and all, I’m a big fan of the great white.

They’re truly fascinating animals. Older than dinosaurs, despite every evolutionary adaptation all around them, they’re still the top predators in the ocean. They have the regular five senses, but they also have a crazy cool sixth sense of electromagnetism, able to feel subtle electrical changes that can barely be detected by the best physics laboratories in the world. They can literally sense when a fish moves its gills from across the water.

But while we may feel vulnerable to them (for good reason—just a few weeks ago a teenage boy was critically injured in San Diego and a young man killed in Massachusetts by great whites), we humans are the ones actually killing them left and right, causing as much as a 70% decline in populations in some areas because of trawling, pesticides and illegal shark fin poaching.

Long story short, we were glad our muppet baby got away clean.

Was the story over? Oh no. I should have known better than to let Colin throw his lure back in the water, because not three minutes later, the line was whizzing and my adrenaline was back in overdrive.

This time, whatever took the bait, ran away with the whole spool and took the lure to boot. Don’t tell Colin, but I was a bit relieved. Who knows what we might have pulled out of that ocean next?

While I know shark families aren’t exactly loyal, I can’t help but think that was his mama out there somewhere, taking her revenge. I just hope she’s satisfied with her efforts and we can call it even.

So where is Pristine and her crew now? The shark adventure was the culmination of our final shakedown to Ventura and the Channel Islands, which was then followed by a last round of the working part of working the dream (flushed coolant, tensioned belt, swapped out zincs, added jerry cans and stowed everything we think we need for Mexico). As of today, we’re living the hard life (ha) in Cat Harbor again, thanks to a meaningful wind shift we’ll tell you about next time.

Till then, massive shout outs to everyone who’s been so generous to us: Colin’s Mom, Deirdre, for the generosity of a place to stay (and shower!) while the boat was torn apart, Ventura Boat Works for great service and parts, Mike and Alison of SV Liberty Bell and Jim of SV Pure Magic for the gorgeous fresh fish, Irish Laura for the green white and orange tricolor flag and to Brad and Martha for the fabulous food and even more wonderful conversation and hugs on into the night. We love you guys!

Sunrise from Smuggler’s Cove, looking out at Anacapa 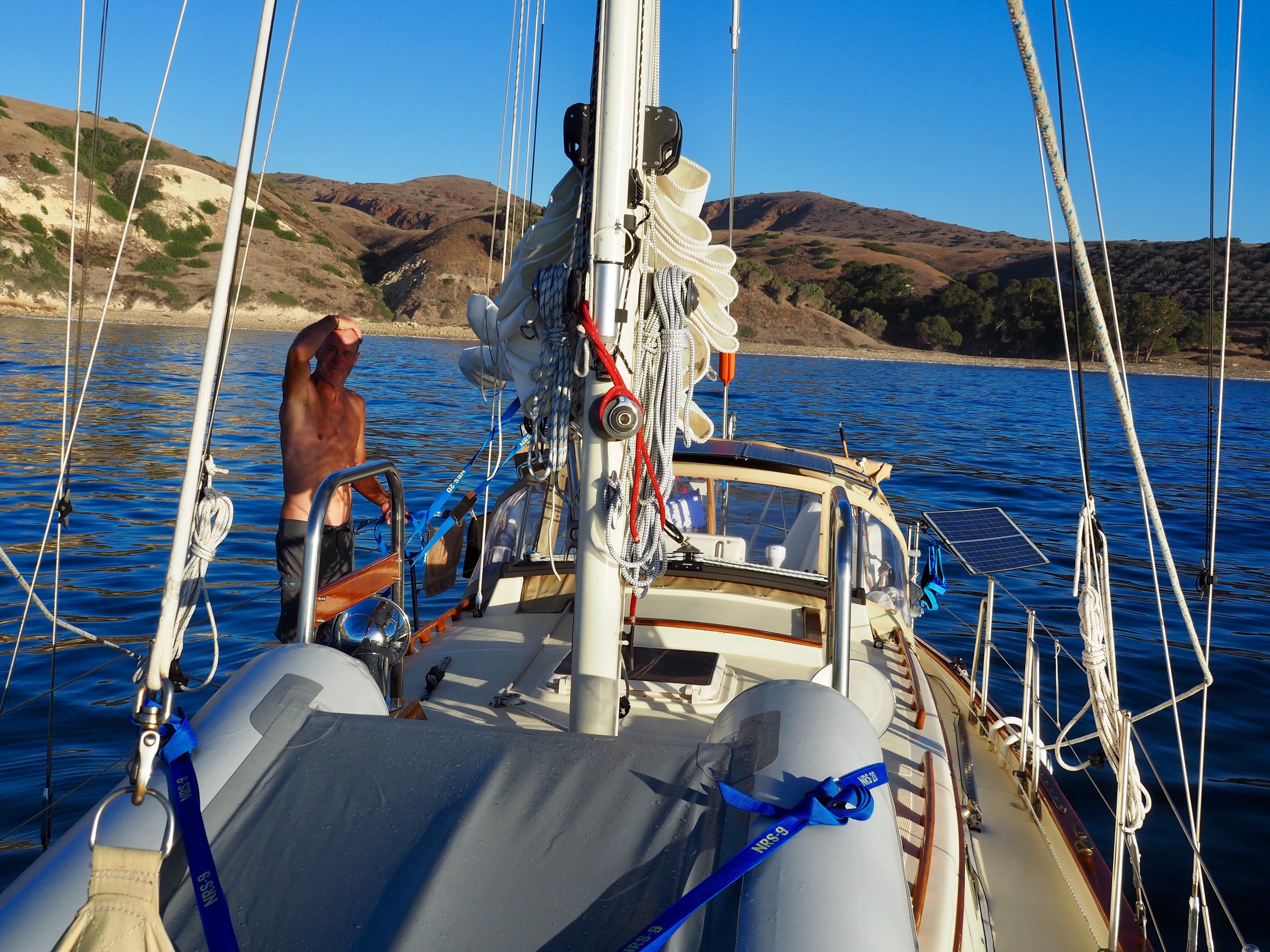 The combination of a hefty southwest swell and a screaming northwesterly wind on our visit to Santa Cruz Island kept us chilling out at the one protected easterly anchorage at Smuggler’s Cove. But who’s complaining? Clearly not this blissed out sailor. 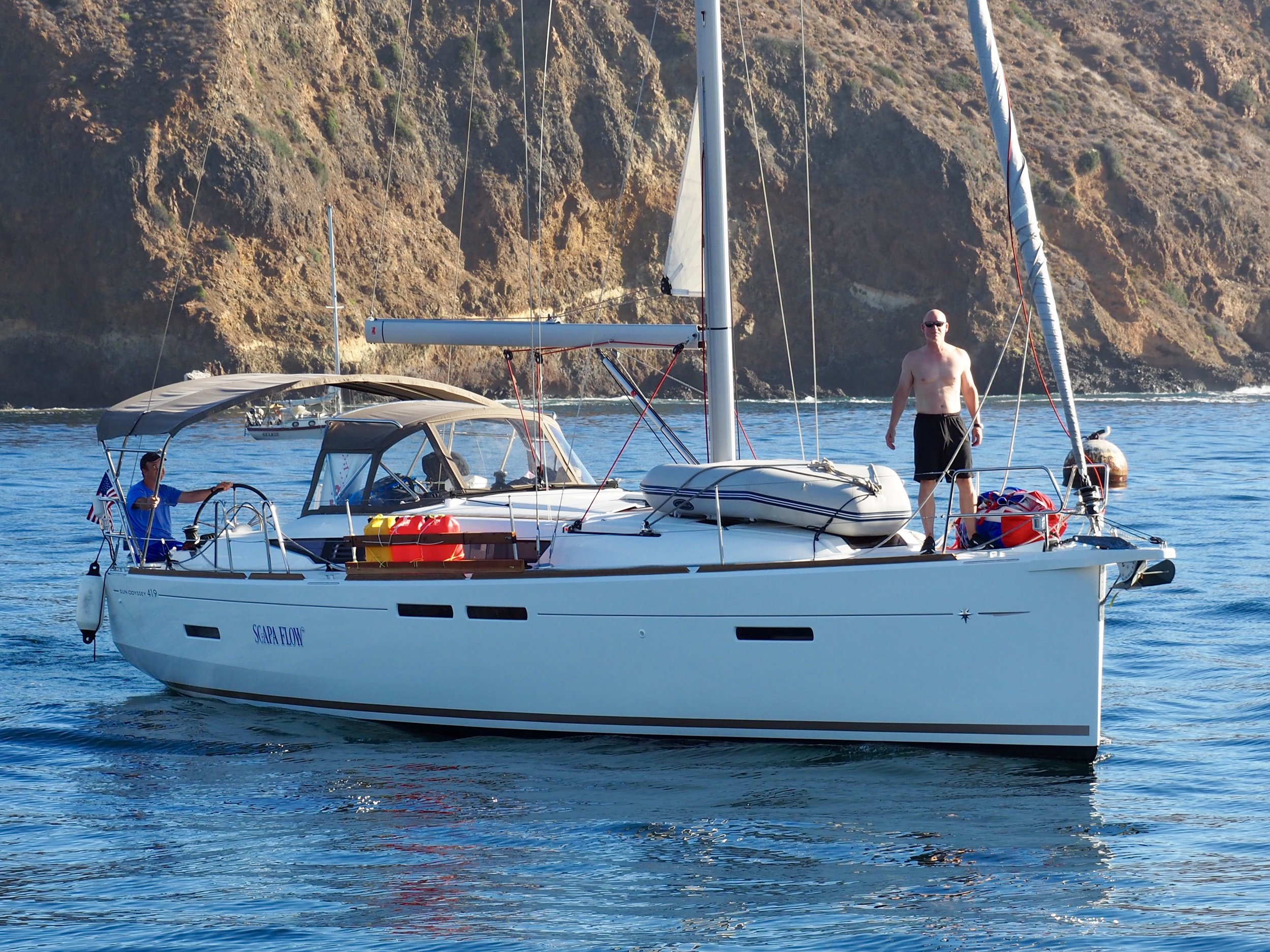 Lucky us! We could rendezvous with our San Francisco racing buddy Barberhauler—I mean Mark Barber—and his friend Frank aboard SV Scapa Flow. 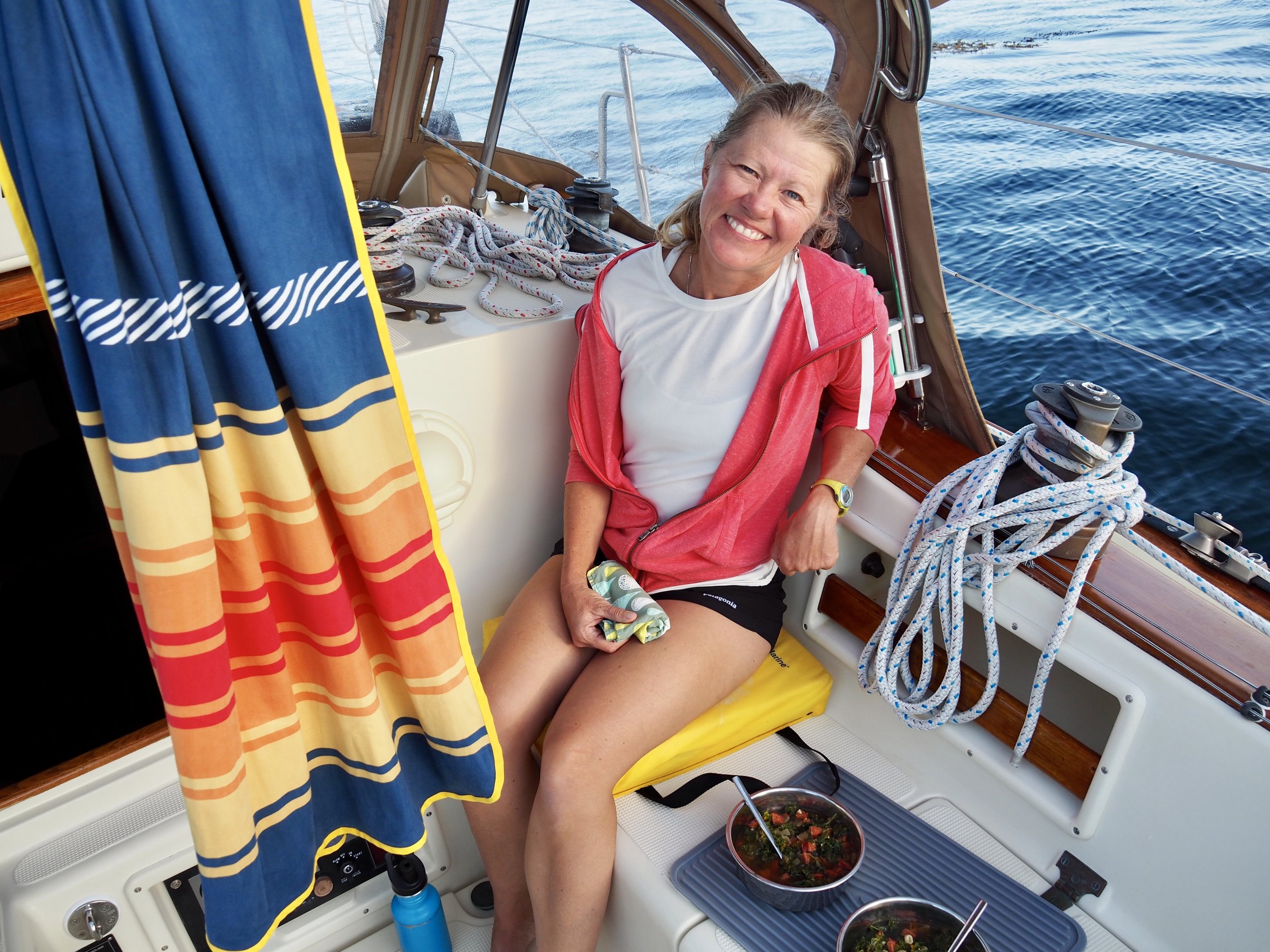 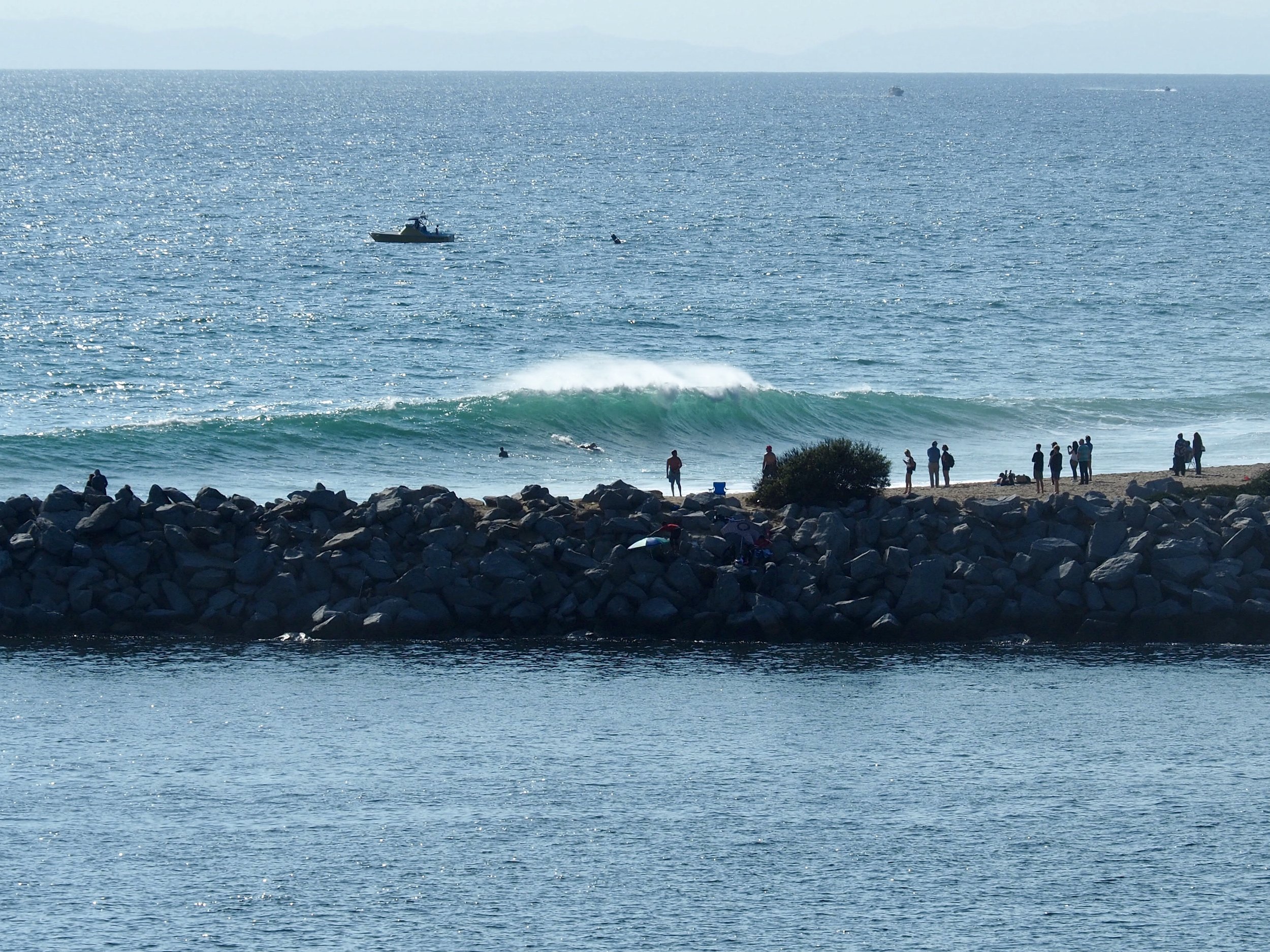 Coming into Newport, we sailed past the infamous wedge in action. If you haven’t seen people body-surfing this wave, search on YouTube. It’s pretty insane. 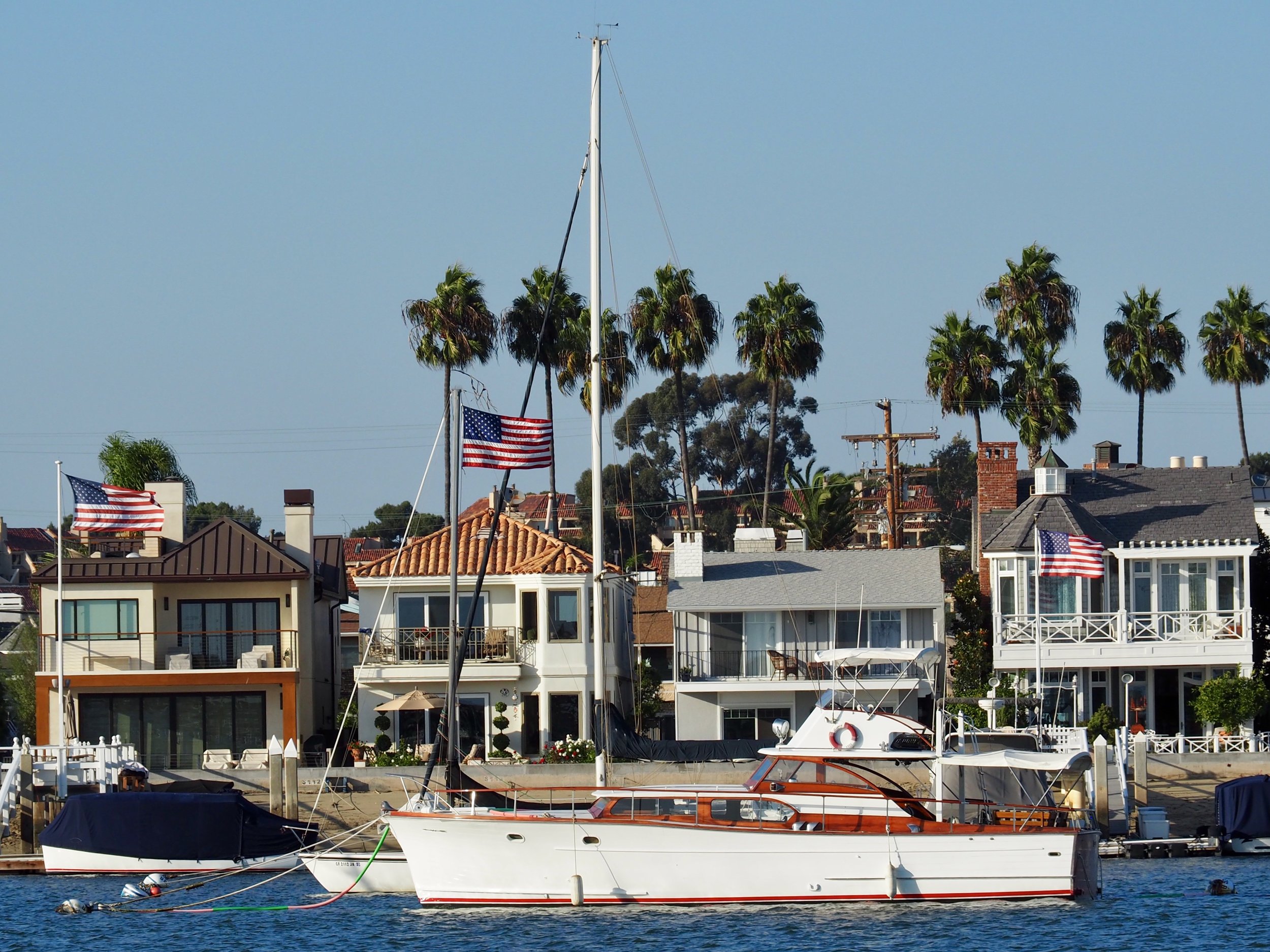 If you’re looking for a place to park your next ten million bucks, you may wish to consider Newport. Just try not to buy a boat so tall it blocks the view from your house—a strategic error that appeared to be rampant in the mega yacht harbor. 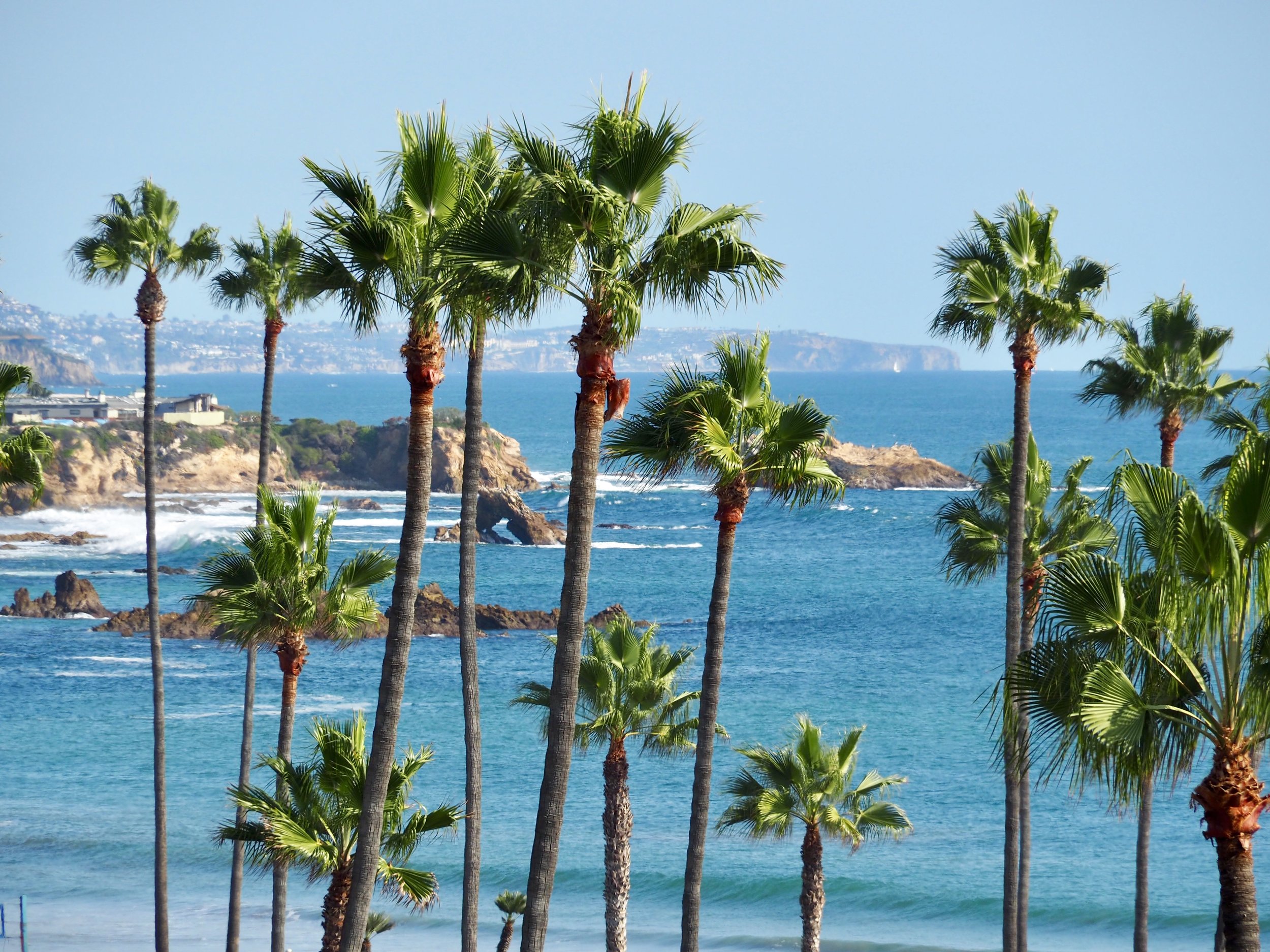 It’s hard not to love California on days like this