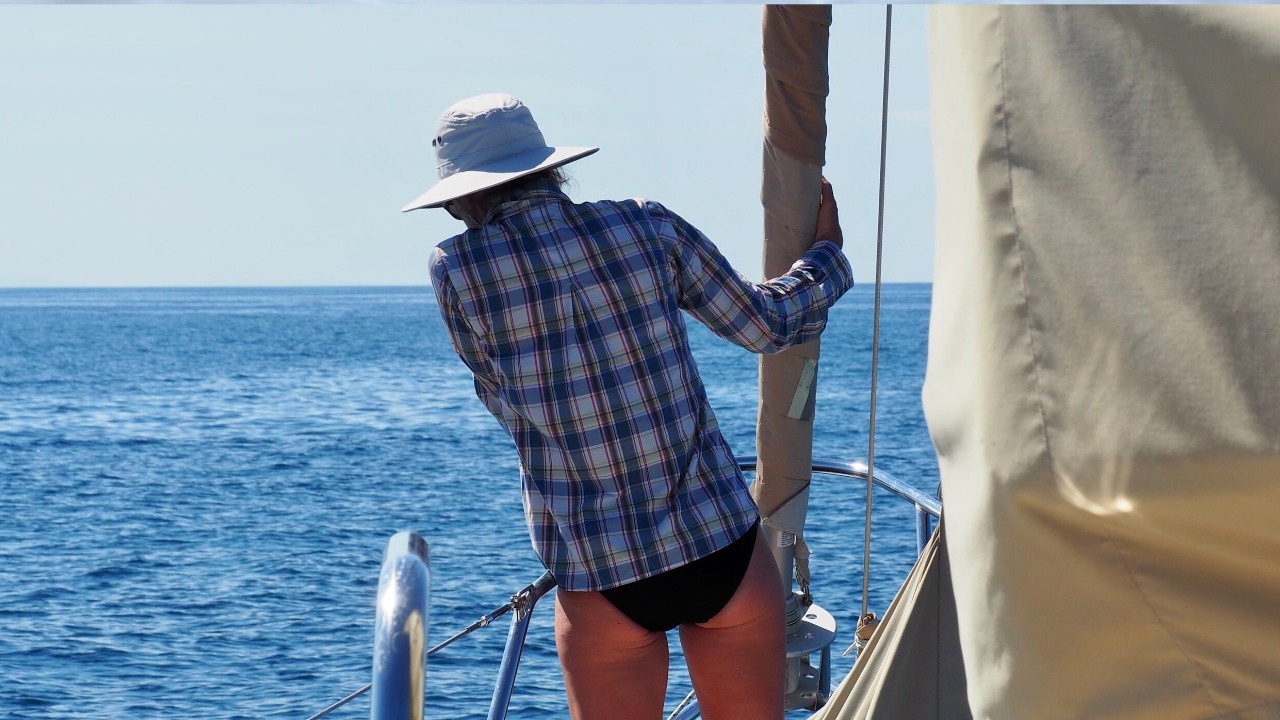 I call it the Losing-My-Sh*t pose.

To my knowledge, there’s no official name for the advanced yoga maneuver that involves wedging yourself between the galley and nav station, balancing on one foot and one knee while trying to achieve the extension and leverage required to scrub the impossible area under the sink. I slipped in a pool of my sweat and fell hard on my elbow—probably because of my fabulous attitude at that moment.

I’d had worked my core muscles to exhaustion and pushed my emotional muscles far harder. I could feel tears beginning, and lay my head down in temporary surrender, hoping to stave off unproductive weeping that wanted to take over. It was as if, having plucked Pristine out of the sea, she was trying to retaliate by sucking all the salt water from my body.

In our last post, Colin and I were preparing to spend a scorching couple months dodging hurricanes in the Sea of Cortez, but life had different plans.

All good, mind, but because of a confluence of family stuff, Colin and I ended up deciding to spend four months in the U.S. instead, which meant putting Pristine on the hard in Mexico. Which meant preparing her to be left alone for several months. Which meant Colin and me baking in the relentless July heat.

But the sweaty, backbreaking labor was just the physical side. The hardest part was figuring out how to leave Pristine safely on the hard in Mexico — an anxiety-producing gauntlet that began two weeks earlier with our decision to go home.

If this doesn’t sound stressful, we understand. People pull boats out of the water all the time. What’s the big deal? Ok. Have you ever left for vacation and worried about your water heater breaking or pipes freezing? Now maybe you can imagine taking your home — the literal frame for your daily life, your sense of routine and comfort, your hopes for the future — hoisting it from its foundation and setting it on stilts. For months. Over hurricane season. Oh, and you have no idea what you’re doing. What could go wrong?

We love our floating house. We wanted to do everything we could to ensure she would continue to be a viable home when we returned. The butterflies in our stomach were doing the meringue. 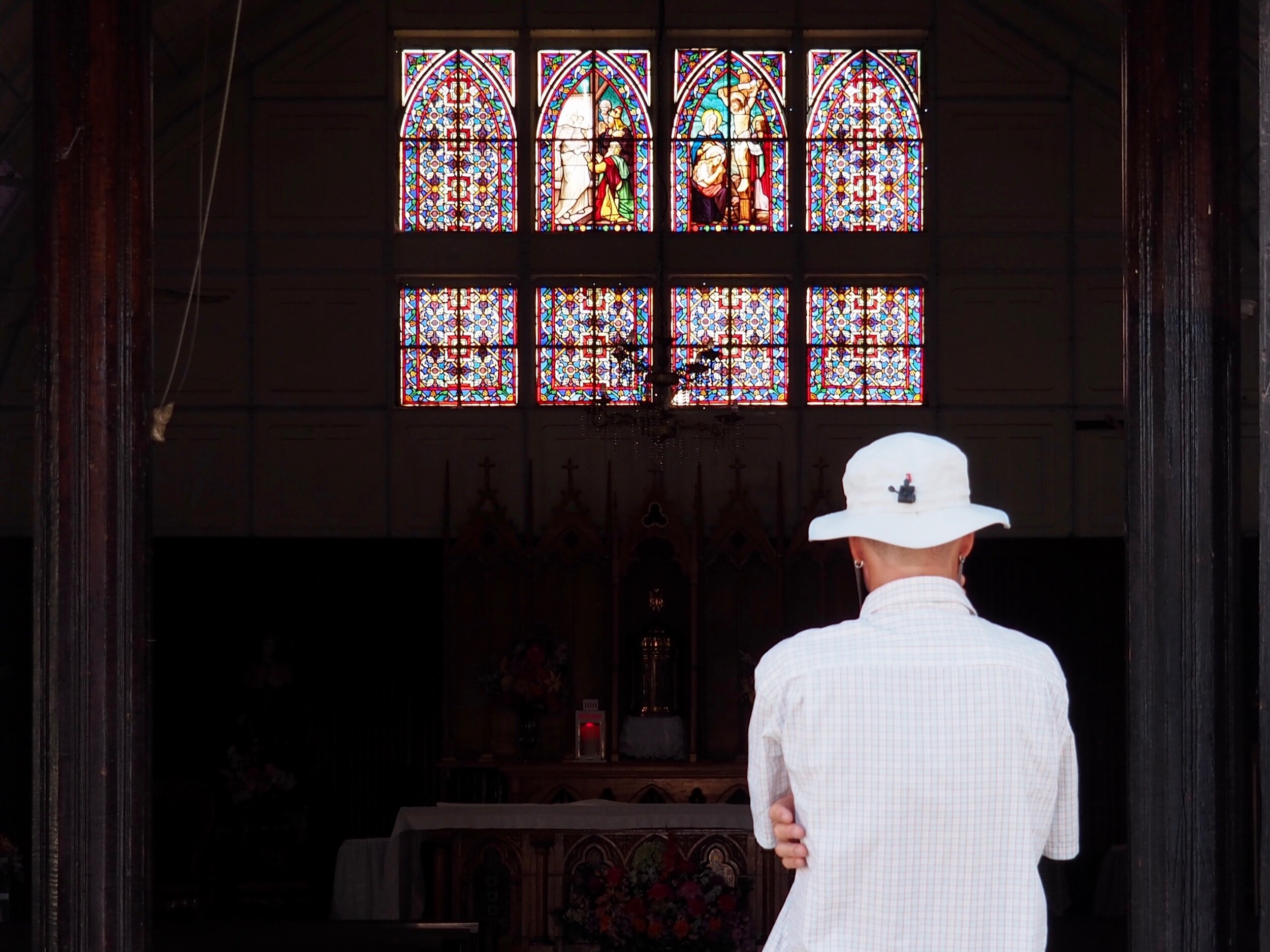 Perhaps he was just admiring the stained glass, but given all our worries at that moment, I suspect Colin had more going through his head when we visited the uniquely beautiful church in Santa Rosalia.

Where to Leave Her?

Since we’d made our decision to leave Pristine on the hard so late in the game, our options were limited, adding to the anxiety. We were up in the Sea of Cortez and storm season had begun, so we weren’t willing to risk sailing hundreds of unprotected miles to San Diego, Puerto Vallarta, or El Salvador. Hurricanes may develop and move slowly, but safe windows in summer wouldn’t last the weeks we’d need for long journeys. For us, that left only two options.

Puerto Peñasco was the farthest from the hurricane zone, but the least known. We had met no one with direct experience up there, though heard good rumors. The area of Guaymas/San Carlos was the closer spot, and the choice of most everyone we’d met, but was right on the border of the ‘safe area,’ the quality of the facilities varied considerably, and by early July, nearly all the good spaces were full.

Once again, the amazing cruiser community came to our rescue with tons of brilliant advice. After a heap of phone calls and no small amount of luck, we reserved a spot at Marina Real in San Carlos, in the work yard on a stable concrete pad. So we had a destination we could feel good about. Step one: Check. 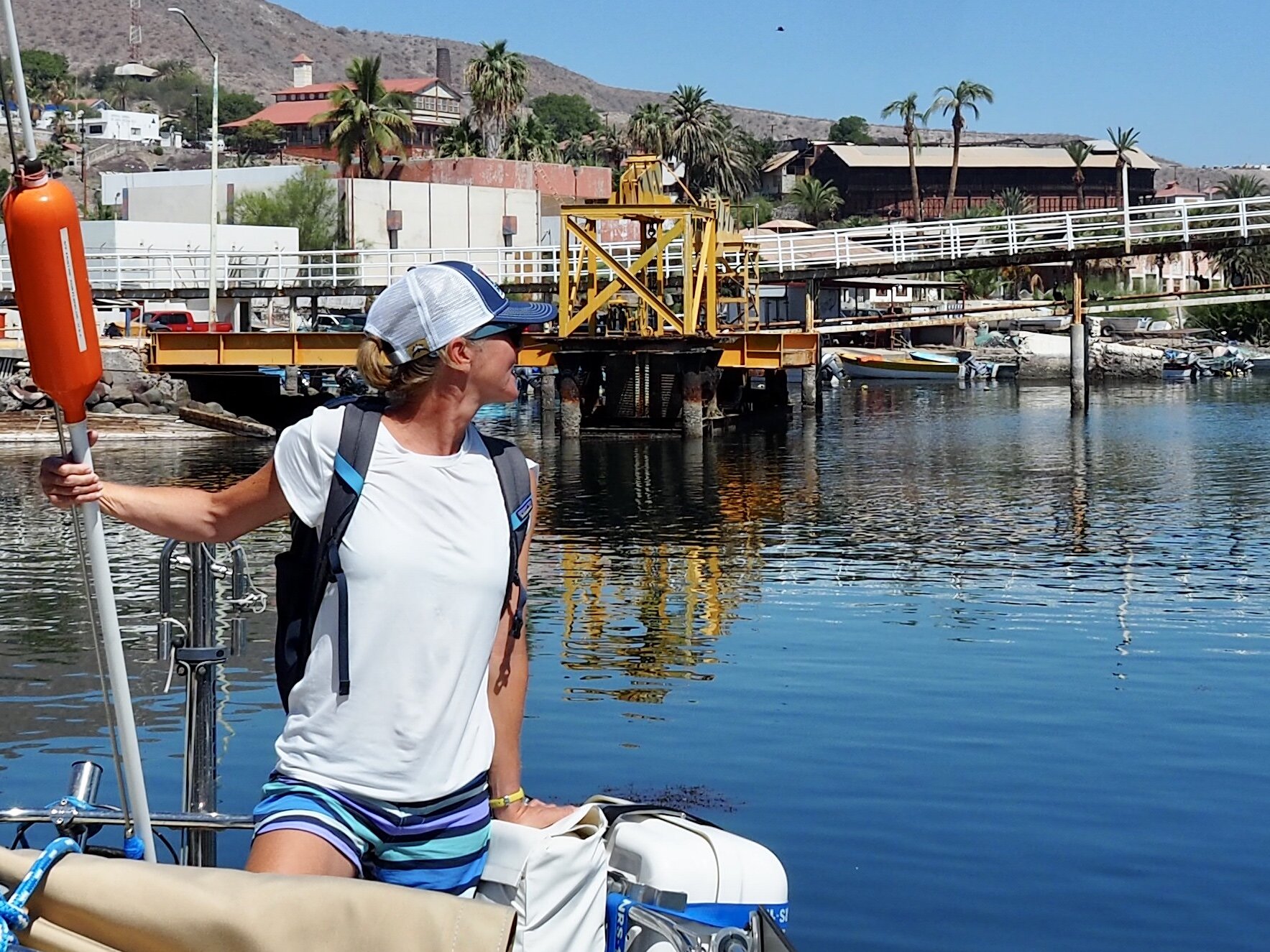 Preparing to leave for San Carlos, wondering how this new adventure would all turn out.

After our third crossing of the Sea of Cortez, we add a new and rather stunning vista off our back porch at Marina Real in San Carlos.

How to Decommission Her?

Once we got to San Carlos, the next round of butterflies swarmed. What did we need to do to keep her from falling over, melting, shredding, snapping or filling with roaches, rats or mold? I can make a project plan to take us to the moon and back, but only if I know what the steps are. As novices, we were pretty much clueless.

I’m more of a bookworm, so I read stuff. Colin’s the chattier of the two of us, so he talked to people with more experience. We compared notes. Some things were straightforward, but enough of the advice was contradictory to be disconcerting. We also struggled with the correct order of tasks and persistent fears of what we might be missing. Should we take the dodger off or leave it as sun protection for the cockpit electronics? Should we empty the water tanks before she gets hauled out or after? In this marina, is it safer to leave her on the hard where she could fall over — or in the water where she could sink?

The reason I was close to tears on the cabin sole that day wasn’t from the week-long effort of taking down sails, topping up diesel tanks, cleaning bilges or inspecting anchor chain, it was from the worry of work that maybe I should be doing but wasn’t. 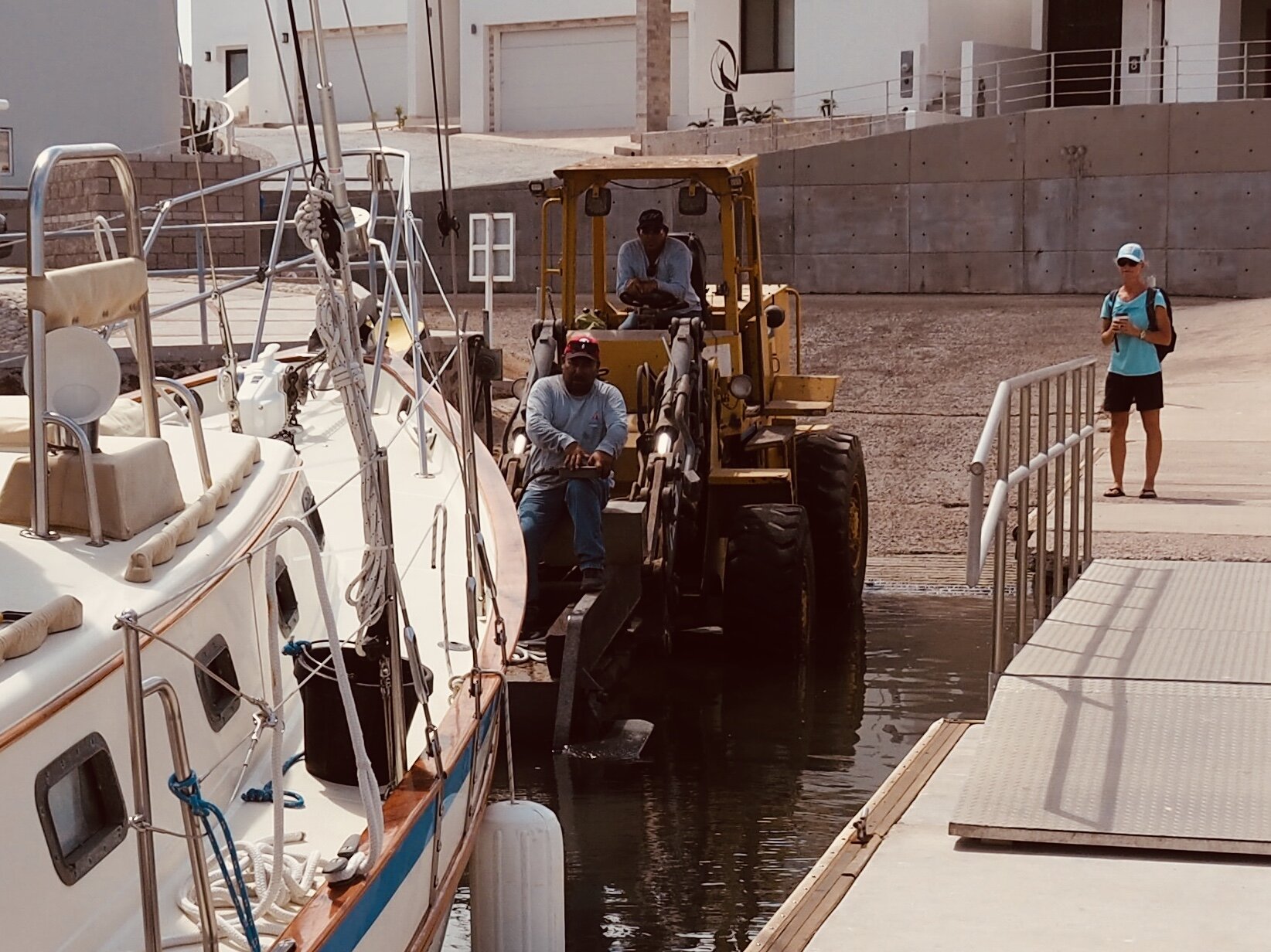 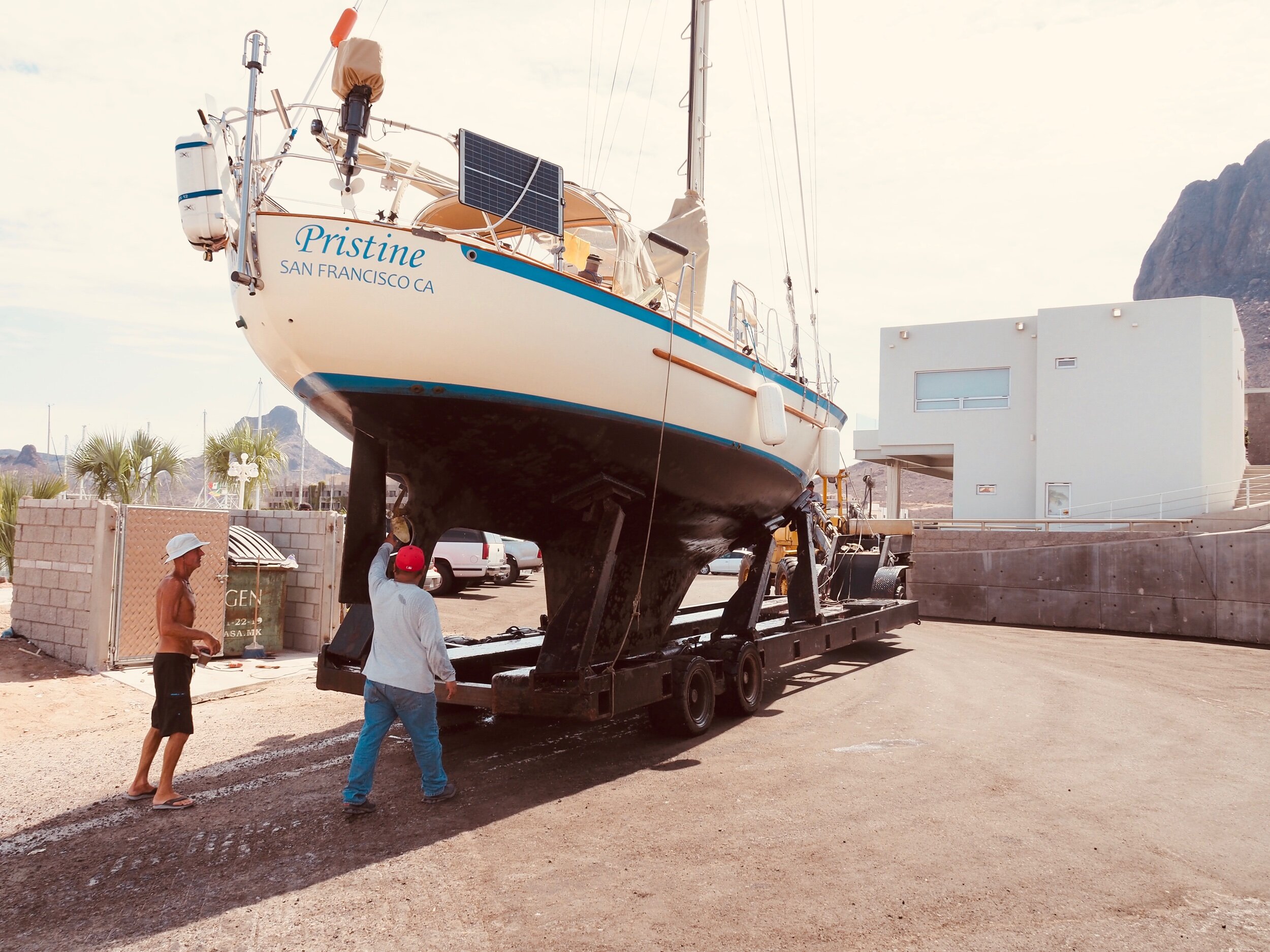 Colin calls this the fascinating multi-armed trailer contraption the octopus. However precarious it looks, it drove us a quarter mile to the yard without incident. (And that’s about as long as I held my breath). 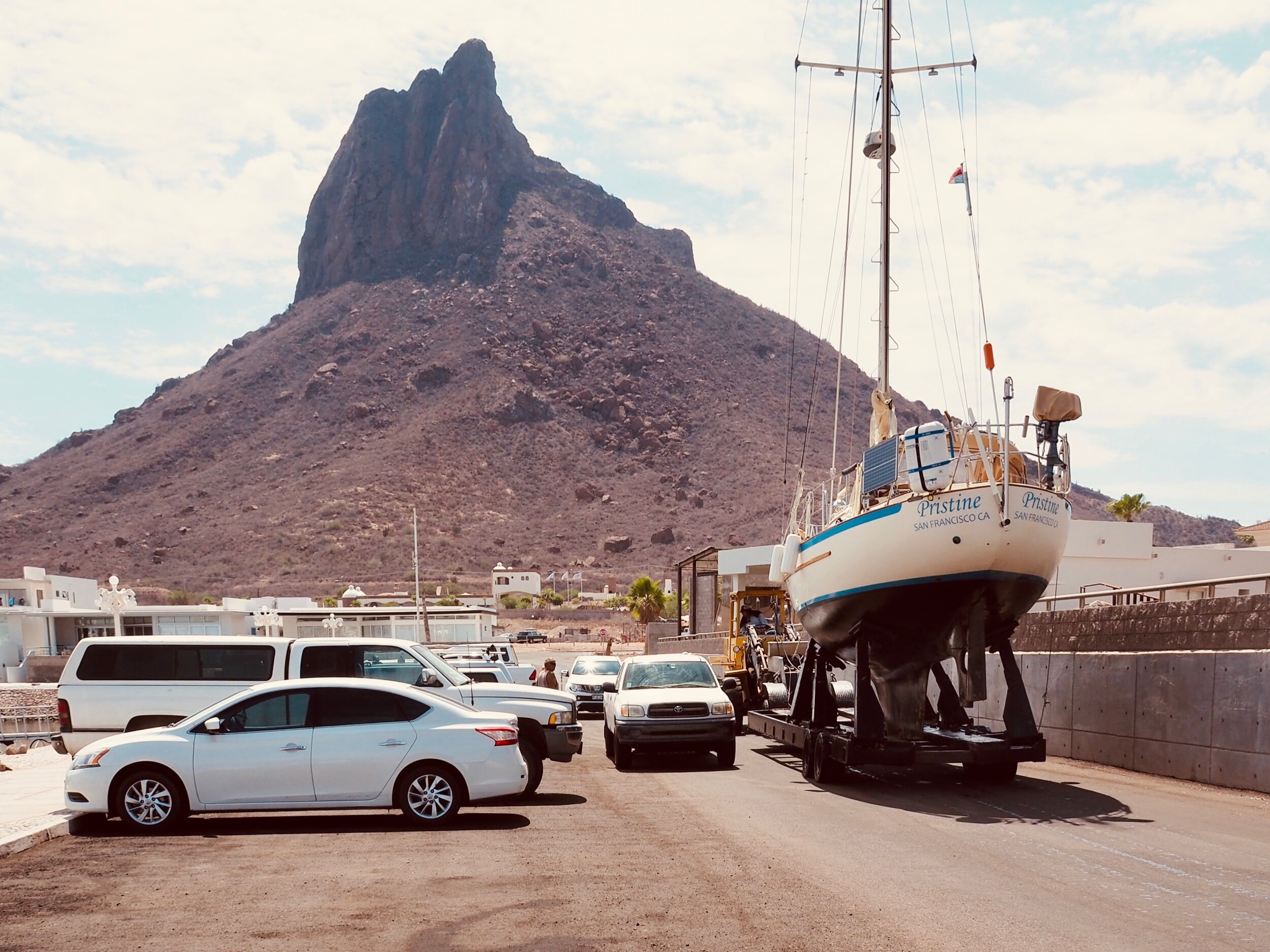 It’s not only fish that don’t belong out of water.

Since people often ask how Colin and I transitioned from cruising dreamers to cruising do-ers, this is my best answer: somehow we found the ability within ourselves to move forward with our stomachs full of butterflies.

We are no different from every other human on the planet — anything outside our comfort zone is intimidating. The first times we took the tiller, docked in a crosswind, sailed out of sight of land were mildly (to majorly) terrifying. But by gently pushing our boundaries and gaining experience, our comfort zone has expanded, and the joy and confidence we gained can’t be over-stated.

We’ve learned patience: In the last 3 months of sailing, we only burned 5 gallons of diesel because we finally relaxed and let the wind tell us where to go. We’ve learned fortitude and are no longer fussed by 18 hours of large, short-period beam seas (read: living room inside washing machine) that would have left us cursing fate last year. We can now hail the port captain in Spanish, cook pretty fabulous dinners upwind and dial in an SSB frequency like pros — or at least solid amateurs.

Yet the learning and growing never end.

For every skill Colin and I master, we face situations outside of current boundaries, and each one is uncomfortable — almost by definition.

Big new stuff like de-commissioning our boat for the first time is hard, but so are the more mundane things. Every time we enter a new anchorage, we face an unknown landscape instead of a well-traveled marina. Shopping for provisions, we navigate new towns, new stores and new products instead of taking a mindless cruise through the supermarket aisles. Each new situation requires new skills that we have to learn on the job.

Sometimes we forget just how challenging this is until we return to a place we’ve been before and have a powerful thrill: Oh, thank God! We know where the hardware store is in this town!

I won’t lie — continually pushing our boundaries is hard — but it’s a mindset. So we deal. We acknowledge the anxiety and break things up into one little piece at a time, read all we can read, and ask all the people we can ask. We discuss and interpret advice, choose how big a chunk to bite off, and rarely reach perfection but usually end up with something close to pretty darned good. That brings the pride and confidence to tackle the next step. And the next. And the process continues, ad infinitum.

Or so we hope. 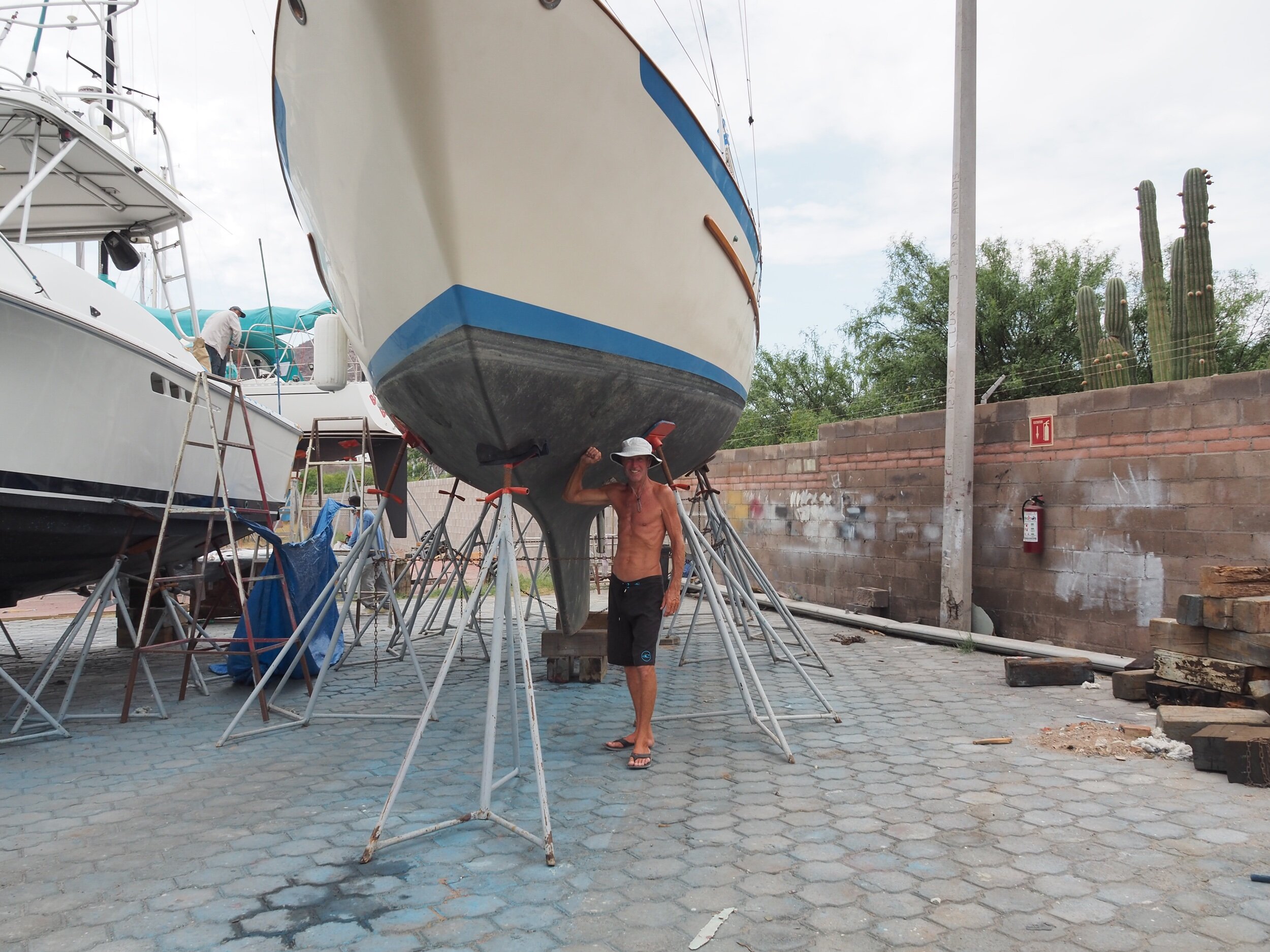 July 2019: Pristine’s summer home. We hoped like crazy that she’d look like this when we returned in November.

How Did She Fare?

Just a couple days ago, after spending several months on land — fretting over NOAA charts of every tropical storm within five hundred miles of our boat — we drove into the yard in San Carlos and saw Pristine’s mast standing tall and proud.

We’ll admit to getting a little choked up, even writing about it now.

As we set the ladder against her lifelines and climbed aboard, we found plenty of dust, but no rips in the dodger. The varnish hadn’t blistered. Even the tinfoil was right where we’d left it, protecting the plastic bits.

We whispered a brief prayer before pushing open the companionway, but weren’t met with the stench of mold or the scampering of unwanted critters. We found no puddles from rain intrusion or rotten mounds of food from exploded cans. And when we hit the battery status button, we got a glowing, 91% that told us the solar panels had done their job beautifully.

It seemed we’d done a pretty darned good job and our beloved Pristine was ready and waiting to welcome us home. 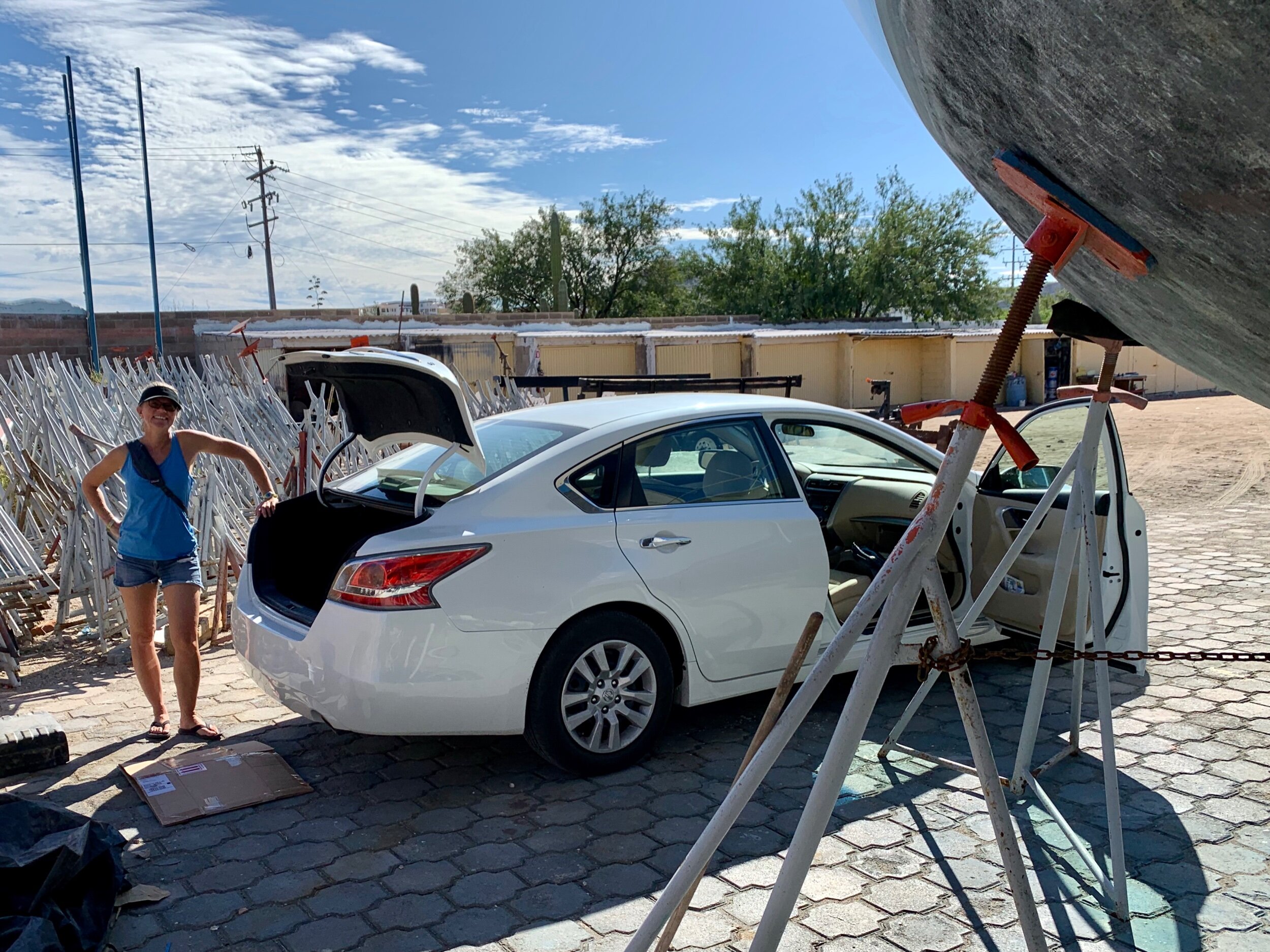 November 2019: We felt intense joy and relief(!) when we arrived back and found Pristine waiting patiently just as we left her. 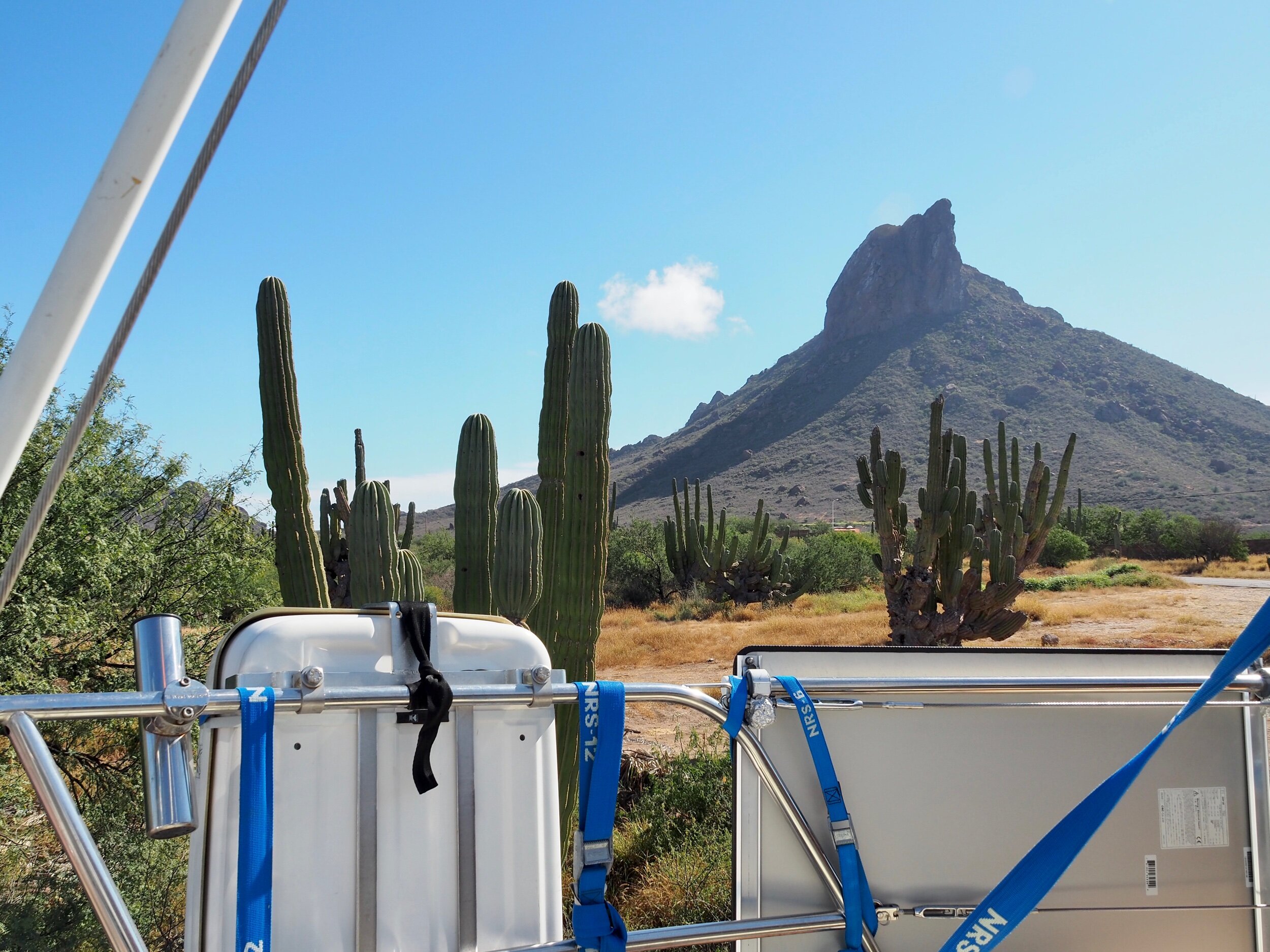 Chalk up another unique back porch view

We’re really excited (and mildly terrified) about our intentions for our second cruising season, but trying to look too far ahead feels like inviting B 52s into our bellies instead of butterflies. So the next ‘first’ is tackling a little epoxy work on the keel. Then painting Pristine’s bottom ourselves. Then a complete set of steps to re-commission and splash her. Once we’re through all that, we’ll face down the next first. And then the next. Otherwise, we’d be too overwhelmed to leave the harbor.

And here’s what we’ll be trying like mad to remember at every step: At age five, learning new stuff is a great adventure, but when you’re in your 50s, it’s far too easy to let your neural networks ossify into comfortable patterns of familiarity. Cruising keeps us off-balance, keeps forcing us to grow new neurons, but for exactly the same reason, it also keeps us vital. The reward is never-ending growth. It is living our lives fully awake. It is realizing that Colin and I, two very average humans who are entirely lacking in superpowers, are capable of so much more than we ever thought possible.

So, of course, now it’s time to push ourselves again and embrace the next round of butterflies. :) 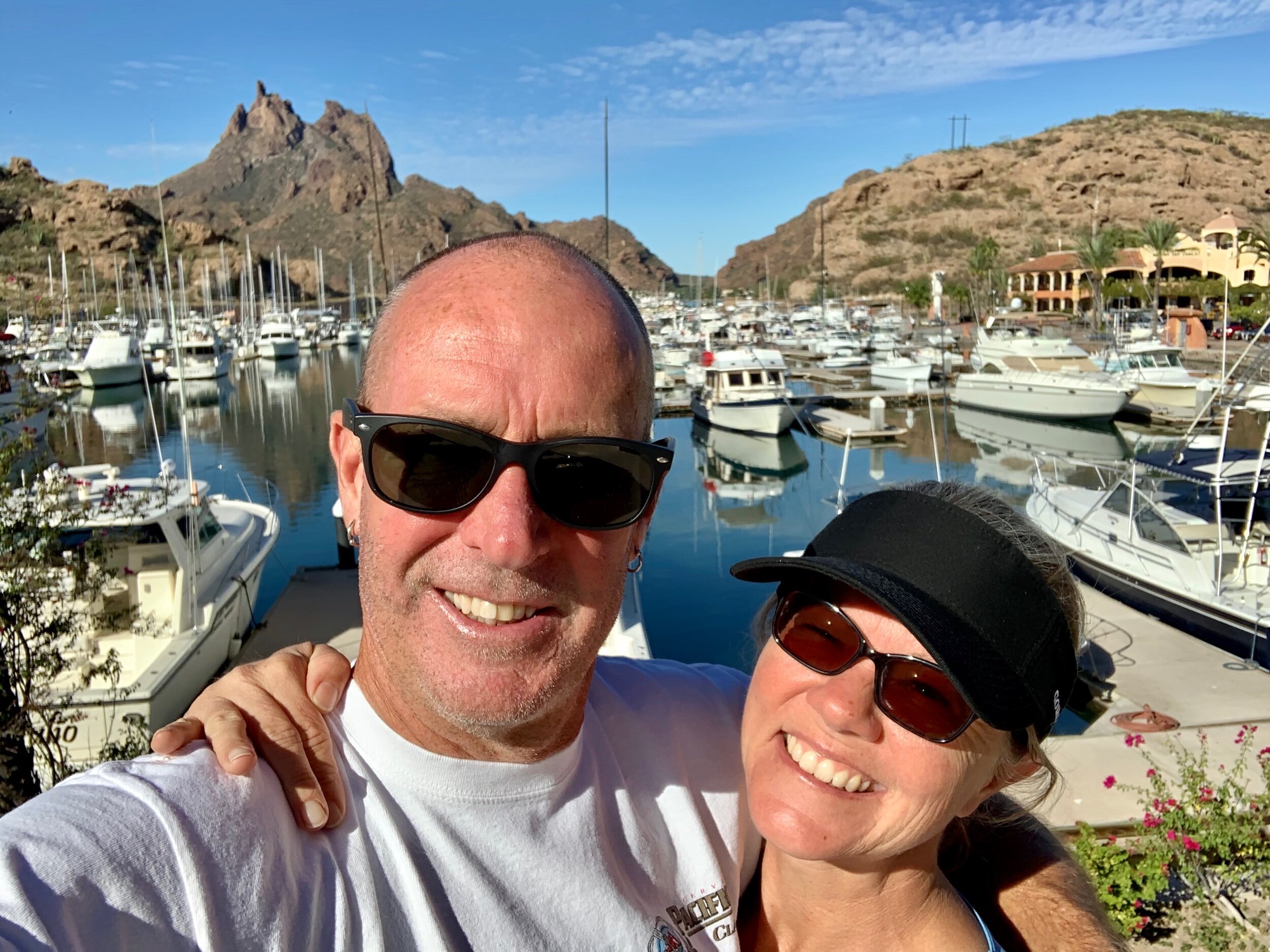 We have a lot more yoga positions to assume before our girl can go back in the water, but soon we will be boat people again!

Isabel and Miguel of Marina Real have been utter angels to two novice boat-leavers — not only finding space and treating Pristine as their own, but going above and beyond with rides and advice and loaned equipment. We can’t say enough great things about our experiences with both of them.

Also, big hugs to Marty and Linny of SV Perspective for giving us the lay of the land in San Carlos, despite what must have been an exhausting final day of preparing their own boat to fly solo for the summer.

And special thanks to Colin’s mom Deirdre for letting us drive her car down to Mexico to drop off a trunk full of boat parts! :)