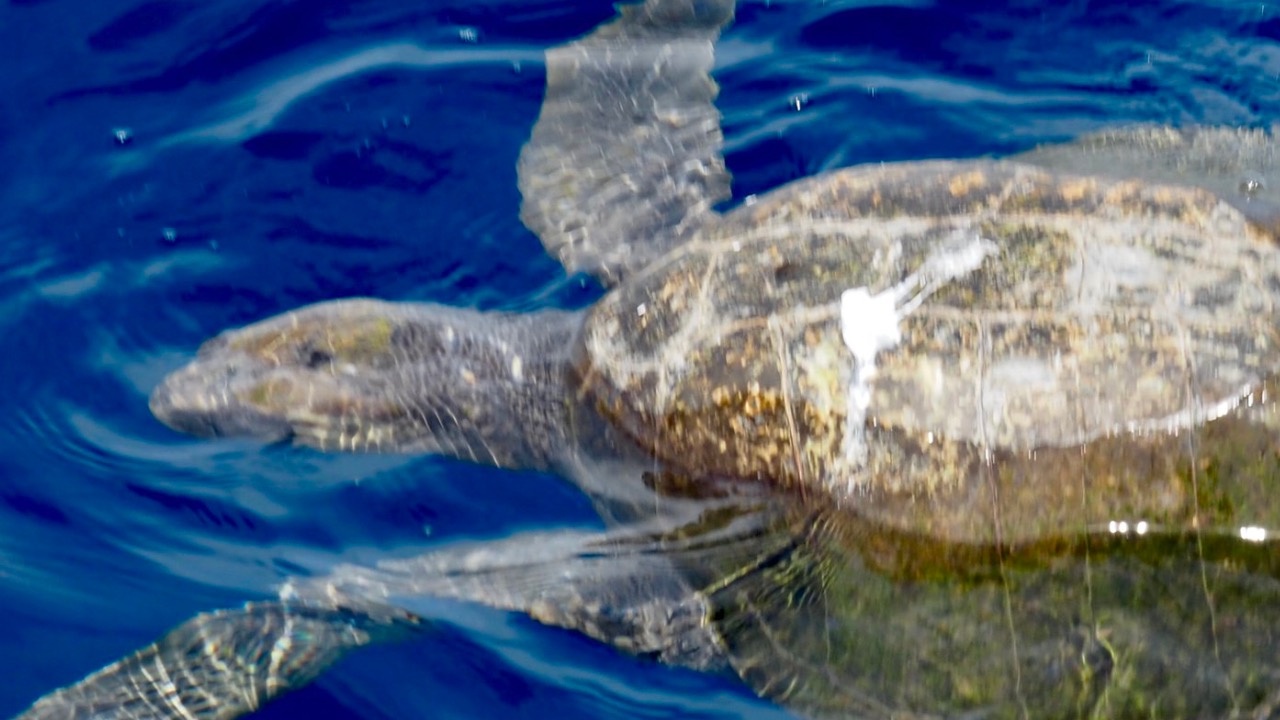 The seagull standing on a rock set off alarm bells. We were supposed to be in 1500 feet of water. What rock??

The binoculars came out immediately. Magnified, the rock took the form of a big, upside-down salad bowl. Also, it was moving.

We grinned at each other like five-year-olds handed ice cream cones. The bird spooked as we approached and took off, landing 25 feet away on another upside-down salad bowl. Beyond it was another. In the distance, one more. This one raised its head.

Just north of Isla Isabel, Pristine had sailed us into a turtle superhighway at rush hour.

Make that chocolate sundaes with whipped cream and fudge and cherries and rainbow sprinkles and Oreo cookies surrounded by cupcakes and banana cream pies.

Turtles have always held a special place in our hearts. They must be the most Zen creatures on the planet — bothering no one and unbothered by everyone. Also, we’ve been lucky enough to watch them lay eggs on the beach and later, watch tiny hatchlings emerge from the sand and wriggle down to the tide line, leaving tiny flipper prints behind like bike tracks to the ocean, where they swam into the big blue like Olympic champions. The cycle of turtle life continued before our very eyes.

It’s rare to get the chance to see a single turtle in nature, and here Colin and I were with dozens of the most chilled out current-surfers in existence. It was an extraordinary experience that slapped us across the face with how magical life was. We felt super-glued to the planet and the cosmos and the joy of living all at the same time. We remained awestruck for forty-five minutes of turtle mania. Maybe a bit too awestruck. One thing you never expect to hear yourself shout in panic: “Hard to port! Turtle at 12 o’clock!” 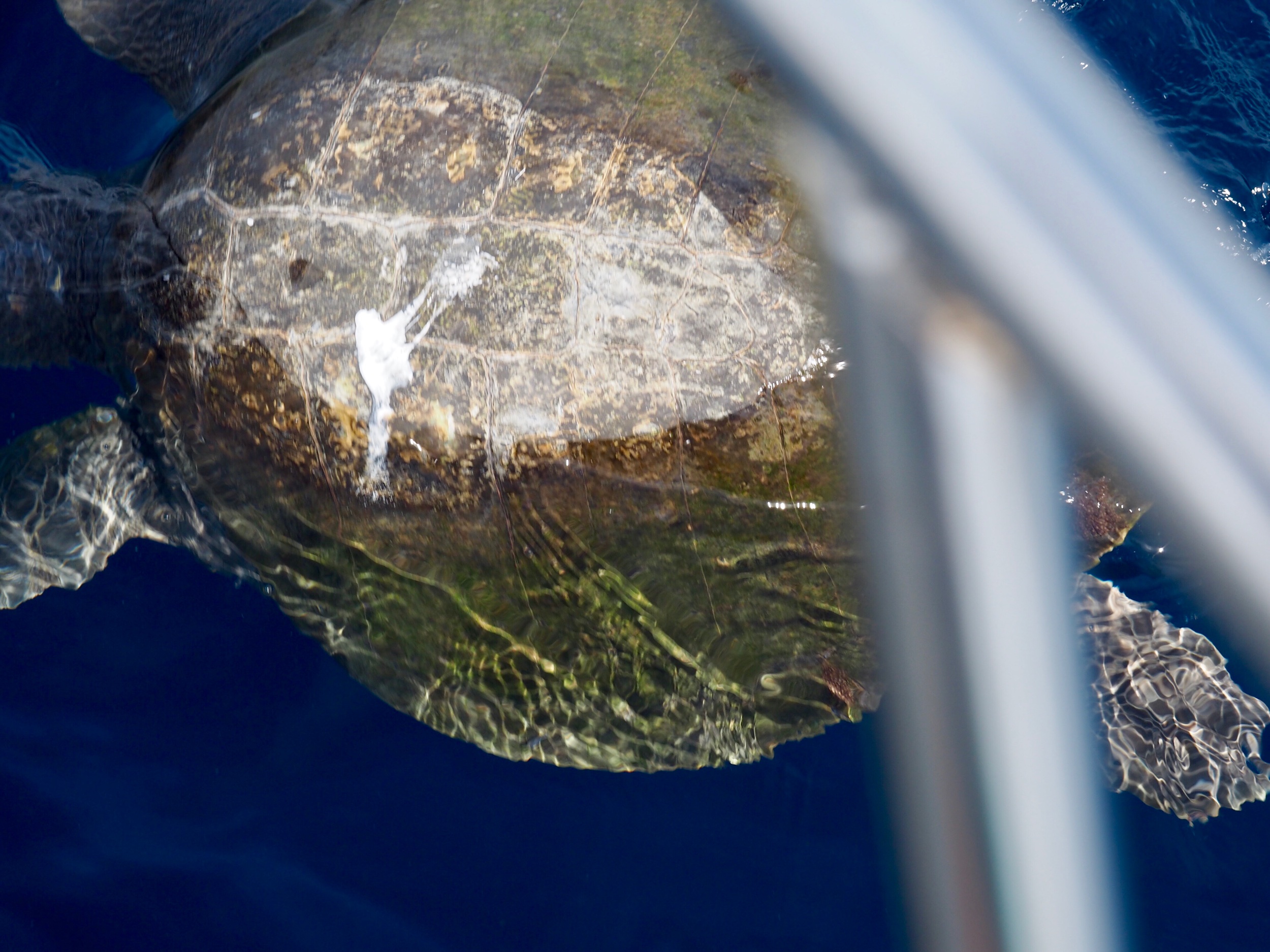 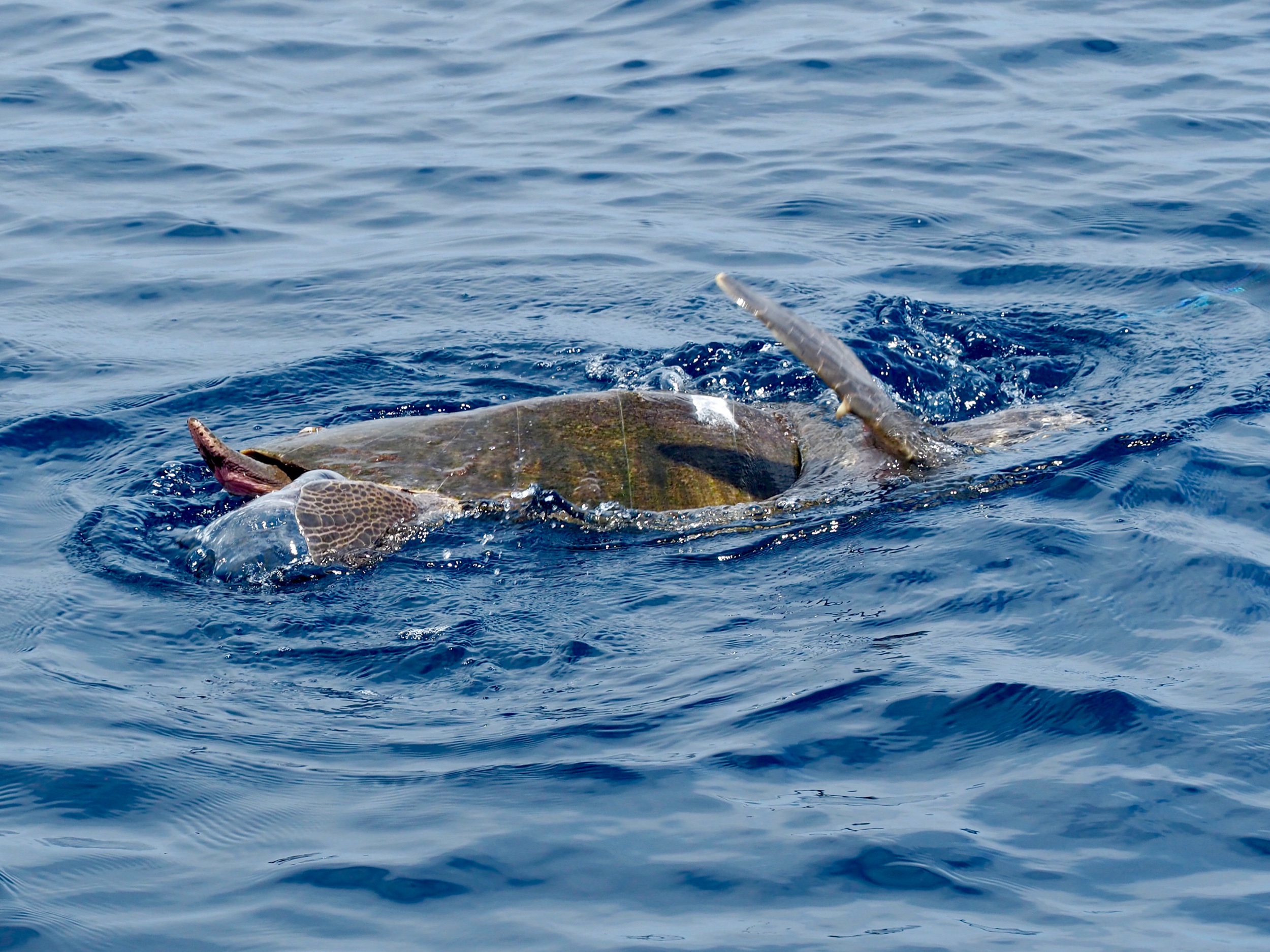 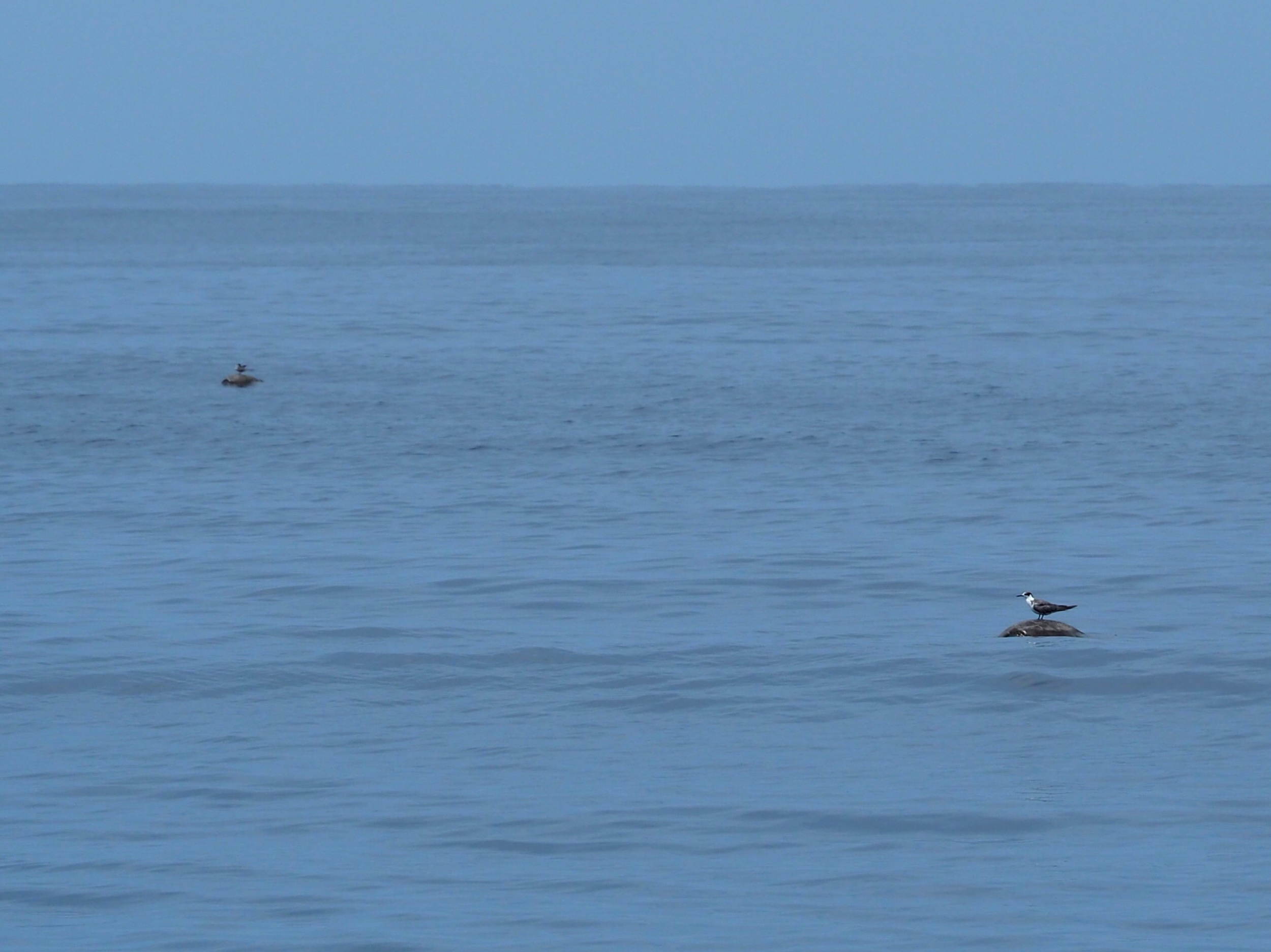 The infamous Captain Ray of OCSC’s sailing school in Berkeley once taught us to “Go slow, not fast” when docking, but also added the critical calculus to use as a backup when things aren’t going to plan: “Hit docks. Not boats.” We don’t know where turtles would have fit into his formula, but I’m pretty sure we would have gladly hit dozens of docks and boats before taking out such a magnificent creature at five knots. We hope Captain Ray would approve. Thank goodness we missed nailing the poor dude by a flipper and didn’t have to find out.

Clearly, next time we’re awestruck, we will keep a sharper lookout on the bow.

Until then, that forty-five minute miracle is a perfect example of why we’re out here, without hot showers or takeout or a queen-sized bed, doing this crazy cruising thing.

On the Other Hand

Honestly, though, it’s not life’s little luxuries that we really miss. We love our bird baths in the cockpit and the food we cook in our miniature galley. We’ve even gotten used to our twin-sized bed and the multiple yoga positions it requires to use the head in the middle of the night. And surrounded by leaping mobula rays, schools of trumpetfish and deserted beaches, the desire for stuff we could buy at Williams Sonoma or Whole Foods comes pretty close to disappearing. Instead, our gratitude level gets dialed up to eleven.

The genuine sacrifice we make to be in this magical place, experiencing this one-with-the-universe bliss, is being apart from our loved ones. We were recently reminded of this when we made a quick trip home. 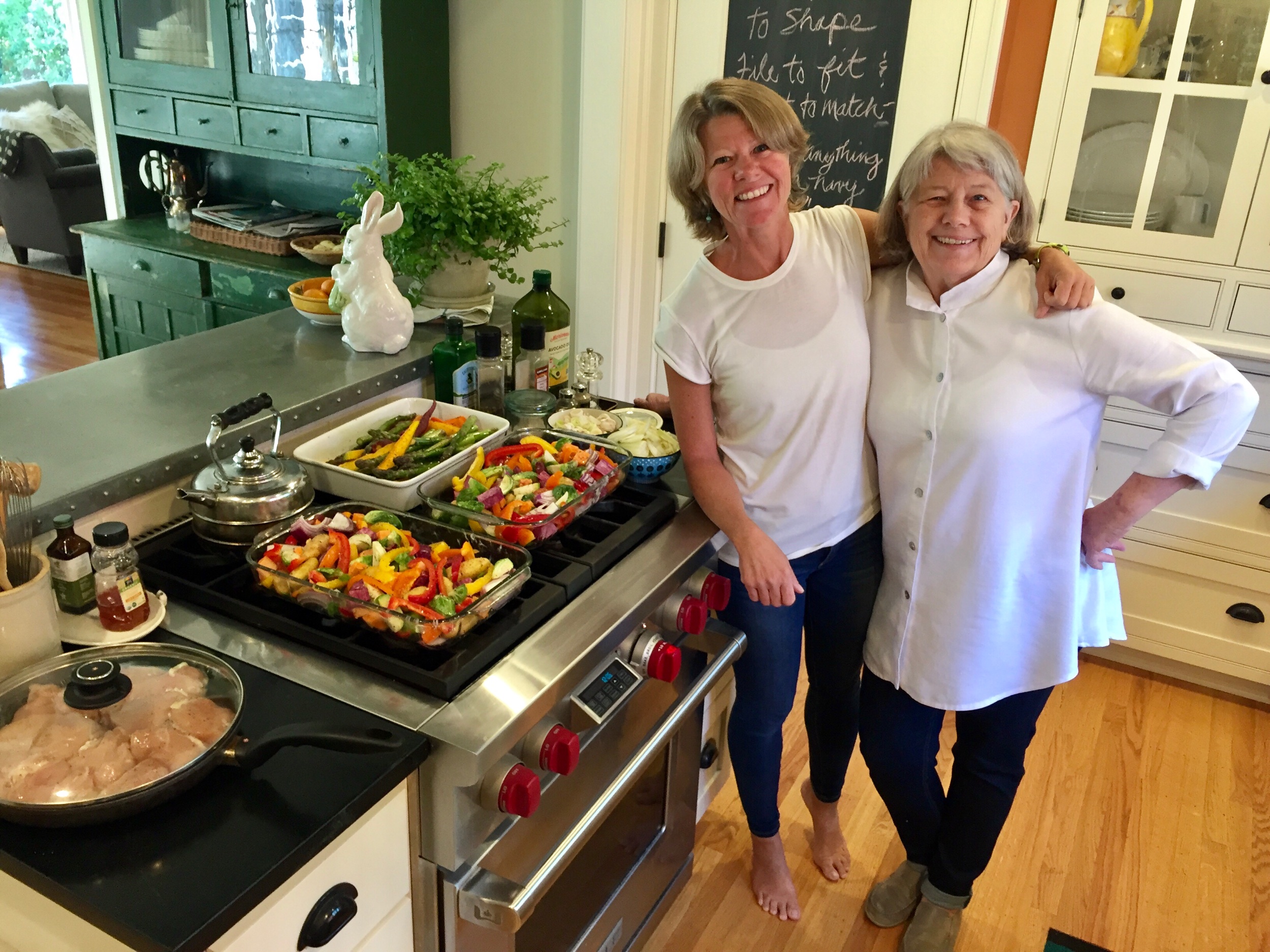 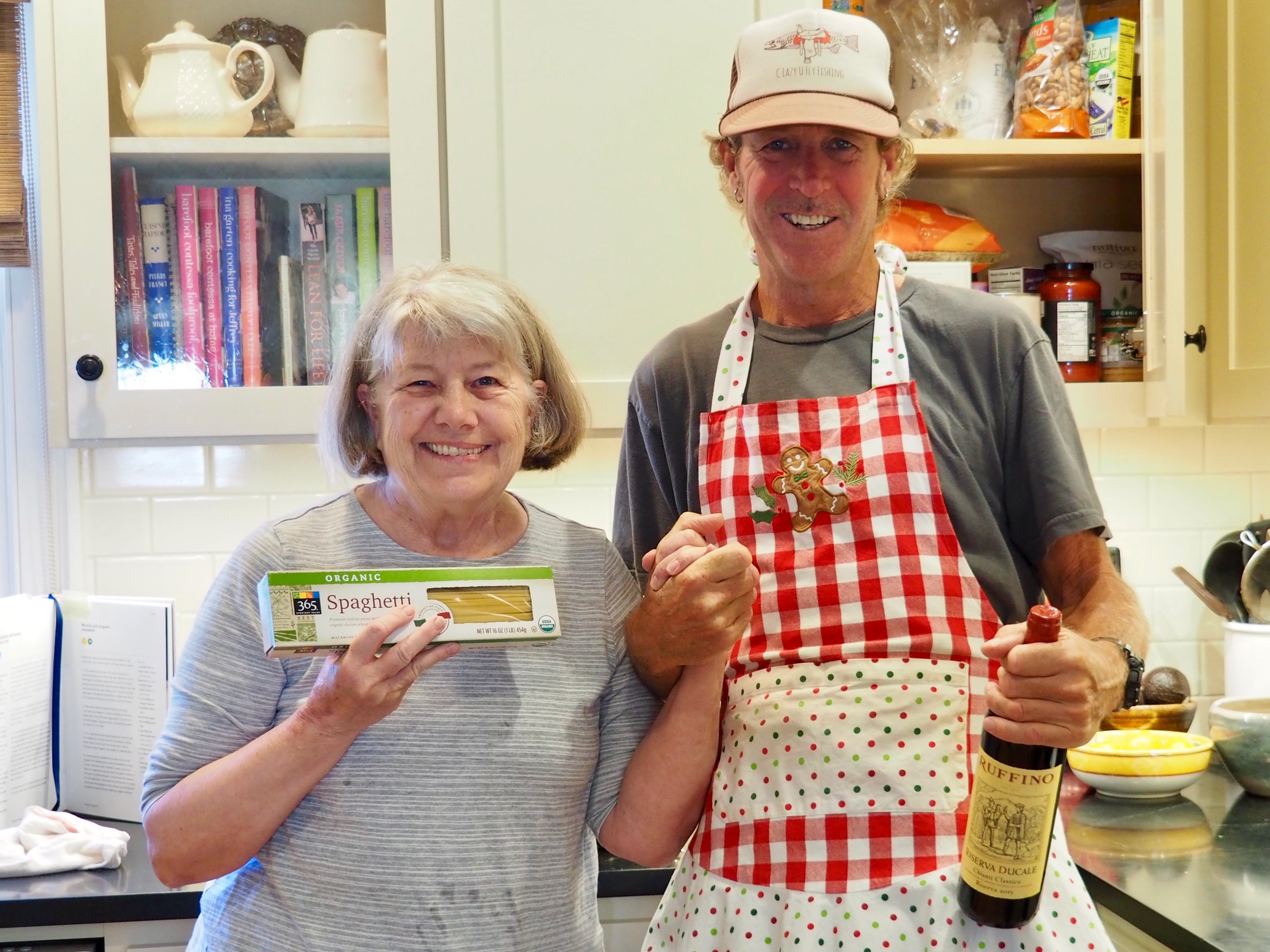 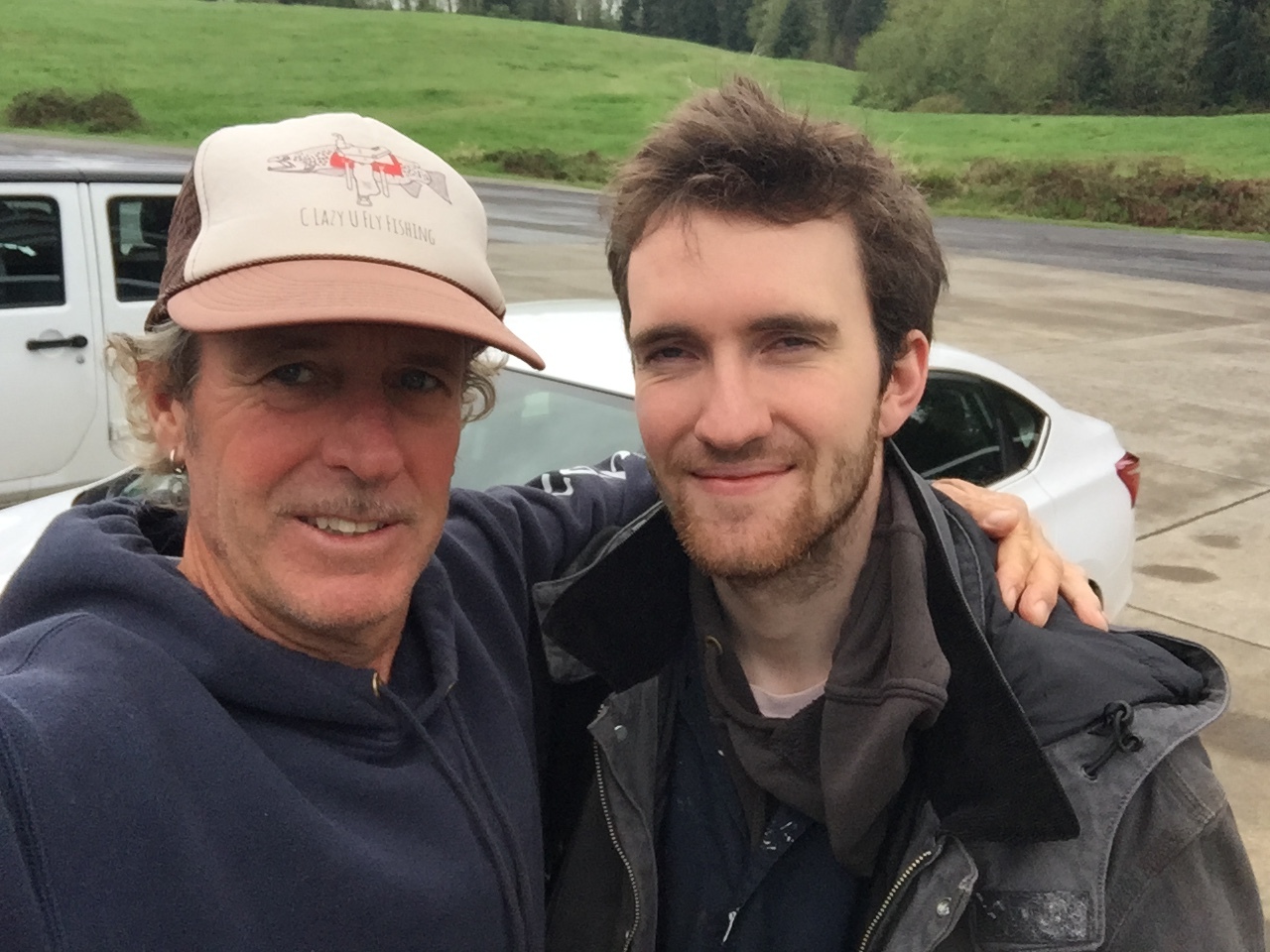 Colin and I are both lucky enough to love our families like mad. Not everyone gets to say that, but we not only adore our own families, we are mad about each other’s families, which by now have melded into one large combined family — in our hearts, anyway. By geography, they’re more disparate.

Home may be where the heart is, but pieces of our hearts are scattered all over the globe. The people we love dearly are in Oregon. They’re are in Northern California and Southern California. In Florida, New York, Mexico, Michigan and New Jersey. They’re are in Ireland, England, Switzerland, Spain, Brazil, Venezuela and Barbados.

On this trip, we took short gulps of family in Portland, Los Altos, and San Pedro. It was beautiful time — and of course far too short. The list of people we adore but didn’t even have time to call was far more massive than those we got to lay hugs on. And leaving everyone again — those that we saw and those that we didn’t — tore us up something fierce.

Even for those we saw, we know there’s a massive difference between swooping in now and again, and being there consistently. Kids grow up so fast. Parents age right along with them. Friends’ lives move on without you. To step outside that day-to-day realm is to sacrifice the shared experiences, trials and triumphs that combine to build the greatest kind of intimacy. There’s no mistaking the holiday aunts and uncles for the ones who make it to your swim meets and share a table every other Sunday.

An Endless Quest for Balance

We read an essay recently by Zat Rana that broke down the inherent tension between a person’s search for enlightenment, which is a deeply individual journey, and the quest for life meaning, which comes from community.

On the enlightenment side, Colin and I are exploring some of the most populated — and most remote — places in Pacific Mexico. We’re learning Spanish, Mexican history, the deep generosity, joy and pride of its people, and the magic inside its borders. We’re learning to make tortillas and hold our breaths long enough to change the prop zinc and what lures will attract a dorado but not a crevalle jack.

More profoundly, we have our moments of turtle awe. We have our dolphins and rays and whales,our dawns and sunsets and starry, starry nights, complete with the Southern Cross peeping up above the horizon. We’re learning, bit by bit, how to be in the moment, appreciate the now, and connect to the infinite.

The best way I can describe the change in my frame of mind is with data. Since my twenties, I’ve needed medication to control my blood pressure. Yet as soon as I left behind the traffic, fluorescent lights, and frenetic urgency of regular life, my blood pressure dropped to normal. That’s how stress-free we’re living.

Our minds are engaged, our bodies are healthy, our knowledge is growing, our spirits are wide awake.

As humans, we all have journeys we must go on — the greatest growth happens when we’re placed outside of our everyday circumstances, whether that involves geographic borders or mental ones. We hope the journeys will expand us as people.

But we certainly can’t make the mistake of thinking that the world stops while we are otherwise engaged. For the time being, Colin and I are the holiday family. This is the true cost of our adventures, and believe us, it weighs heavily on our hearts.

For now, we can only say that finding the balance itself feels like part of the journey, and we will continue to move the fulcrum wherever it feels most right.

You wouldn’t think the smell of burning garbage would make you feel at home, but Mazatlán welcomed us with an elegant simplicity we hadn’t even realized we’d been missing. When we arrived on the docks, slip neighbors called out warm welcomes and soon joined us for a night of street tacos and Latin jazz.

We’re currently in Bahia de Los Muertos near the southern tip of Baja, intending to work our way north toward Loreto and then on up to Bahía de los Ángeles, enjoying as many of the gorgeous islands and bays and anchorages on the way as we can. This also means we’ll most likely be off the grid much of the summer, hopefully with the occasional Wi-Fi hotspot to let us reconnect briefly with the world. 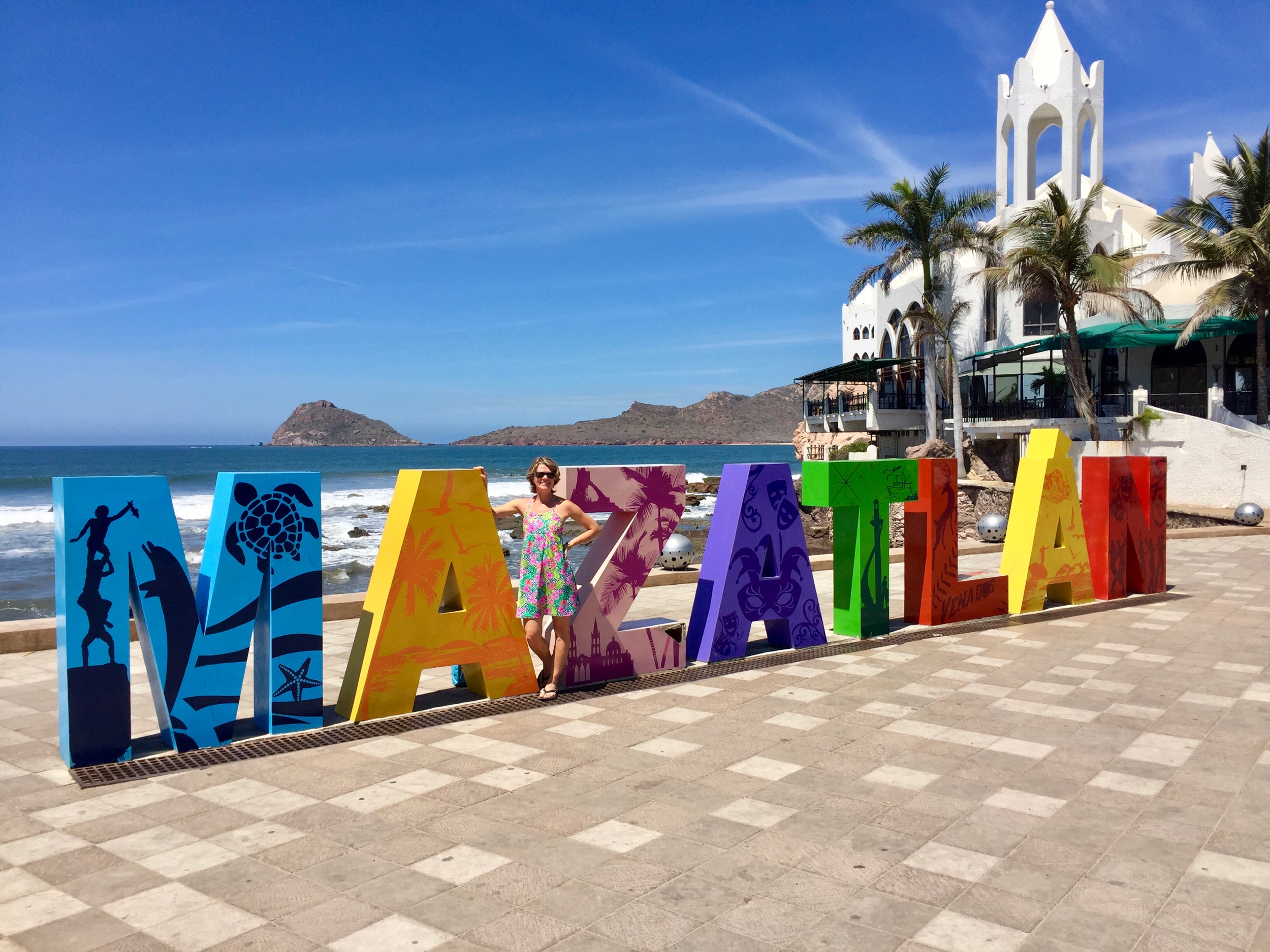 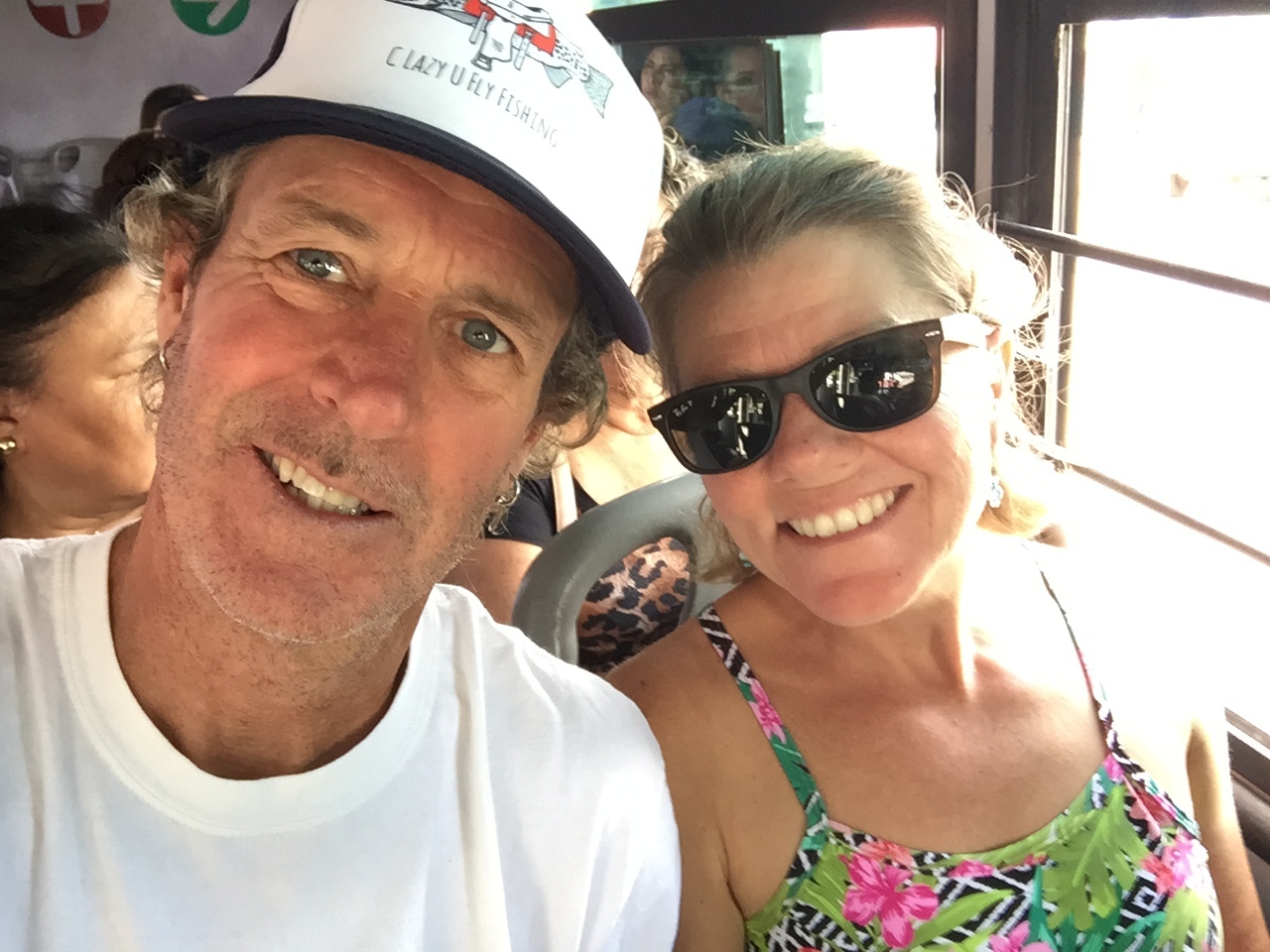 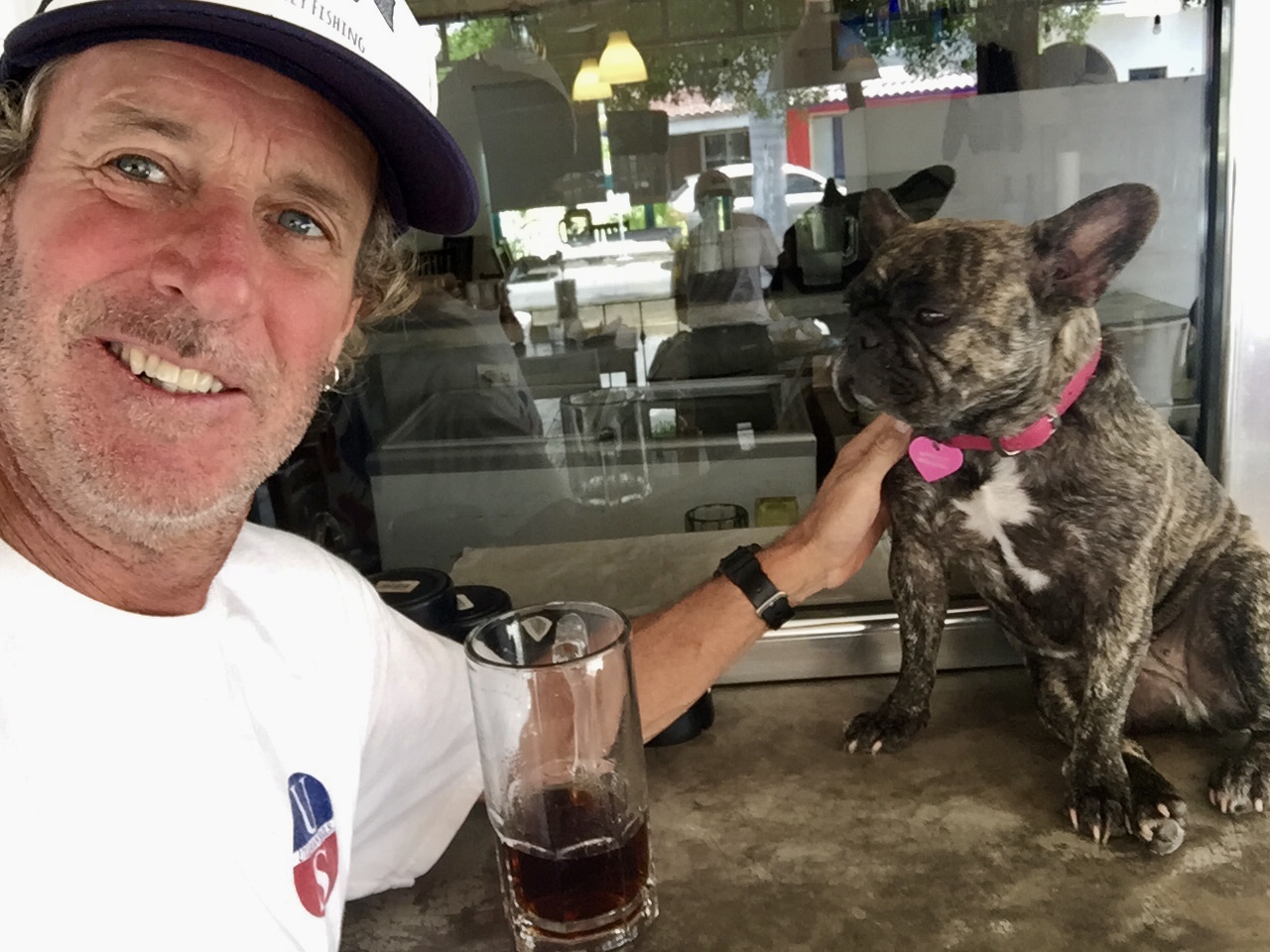 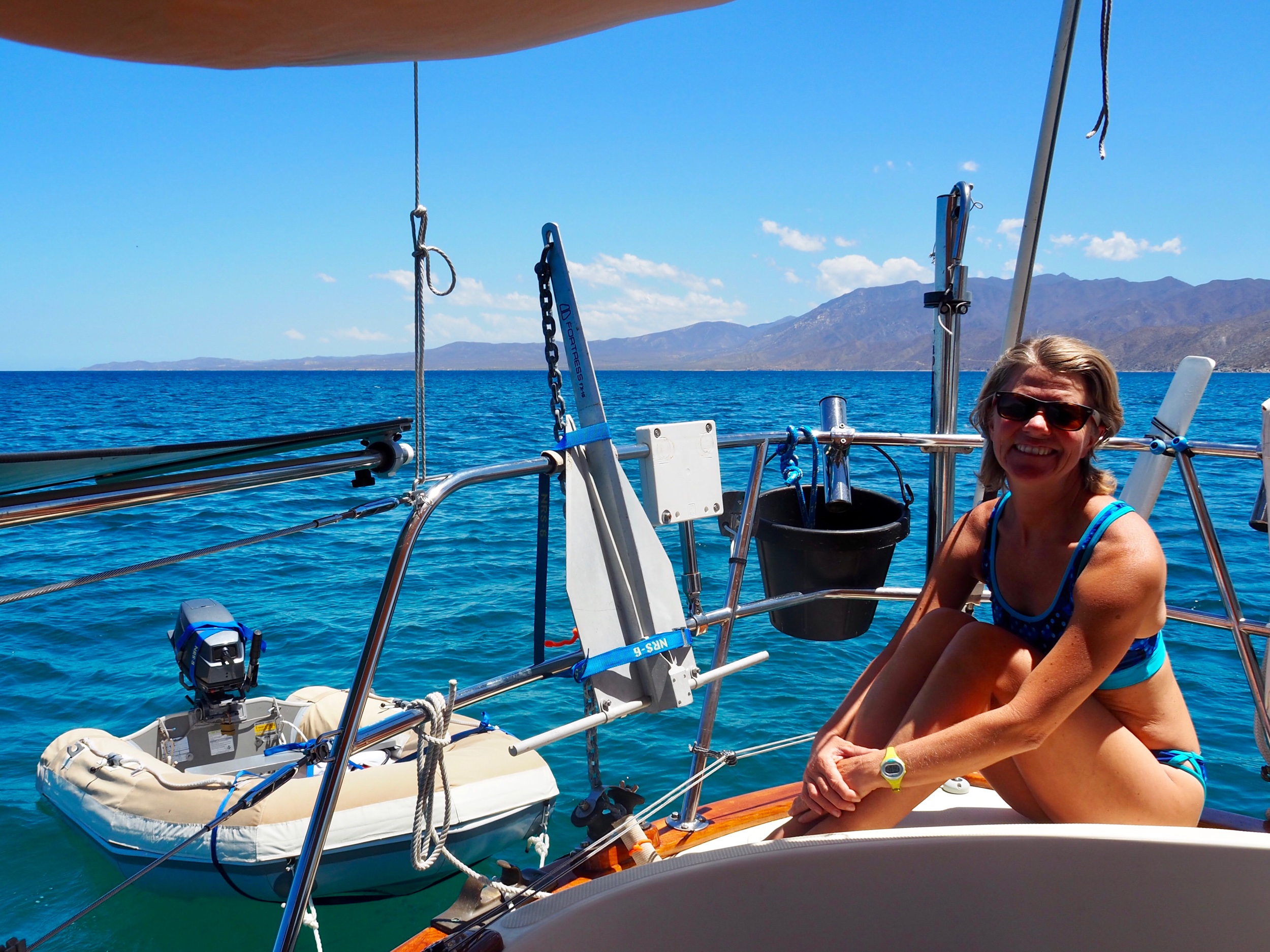 After turning Pristine into our precious home over the past year, it was a gut check to leave her for the first time. We had nightmares about the dock lines chafing and the bilge alarm going off for days with no one to stop a leak.

We needn’t have worried.

Not only was she perfectly safe at El Cid Marina in Mazatlán, the amazing cruiser community all looked after her as if she was a lost puppy. Sharon and Clarence from SV Lotus kept us updated on the varnish work, Chris and Jen from SV Ginger watered our rosemary plant, Harry and Suzanna from SV Gardyloo tightened the straps on our surfboards, Joe and Christine from SV High Road sent photos and John from SV Valkyrie — a fellow Crealock 37 owner we hadn’t even met — sent us a message asking if it would be ok to adjust our fenders and spring lines because they were looking floppy. How outstanding is that? Yes, please, and THANK YOU!!!