Killer Whales in Our Bathtub 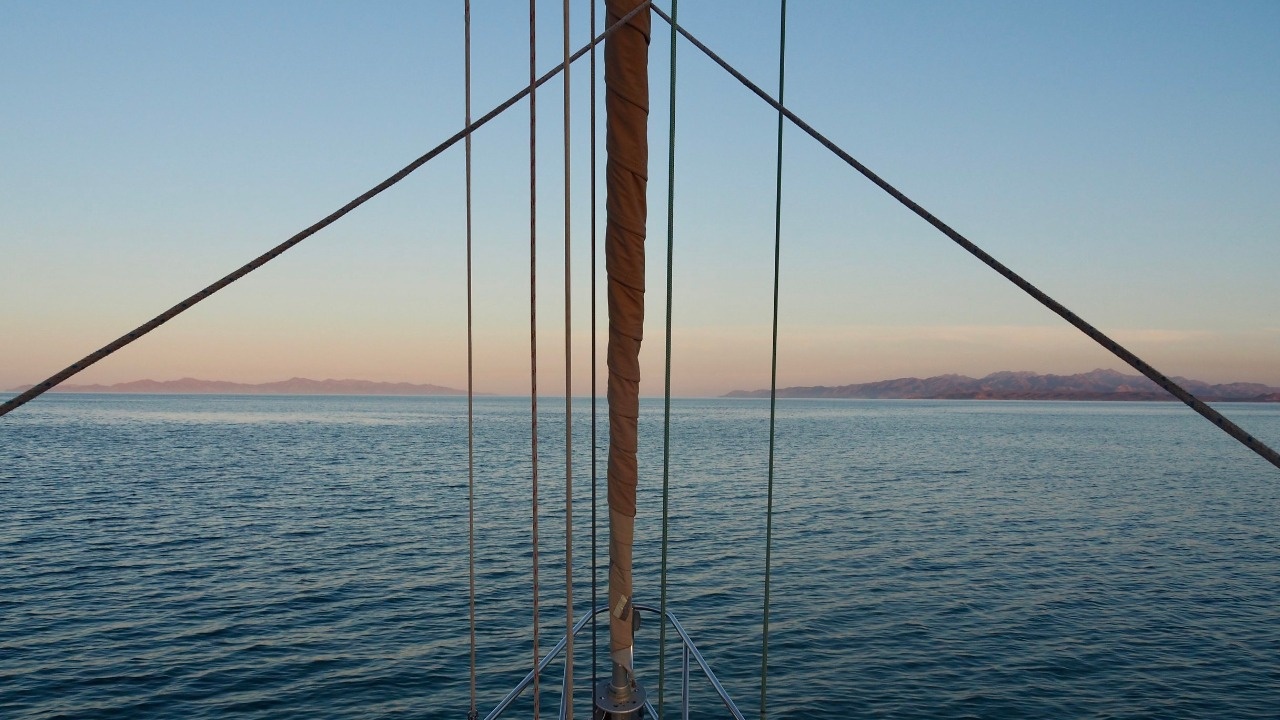 It’s a unique experience to wake up, step in the shower, and find a razor-toothed predator.

Colin and I live a pretty clean life on Pristine, bathing every morning in the world’s biggest bathtub, scrubbing down in the cockpit, then rinsing off the salt with a spritz of fresh water. We’ve dubbed it our bird bath. Nature must approve because regimen has made for silkier hair than any grooming product I’ve ever paid ridiculous amounts of money for.

Turns out there is a downside, however.

While it has thrilled us to share our bathtub with turtles and humpbacks, angelfish and pelicans, we know there are other things lurking out there too. Before we dive in, we do a quick scan for stingrays, jellyfish or sharks, but in a year of ocean bathing, neither of us has experienced a reason to fear.

Thus, killer whales were definitely NOT on Colin’s mind when he took his au naturale plunge into the bay of Timbabiche.

The water was pleasantly lukewarm, so he took his time swimming around the boat for a little exercise. He scrubbed the algae from the boot stripe and double-checked the depth by standing under the keel. He’d just climbed the ladder to the deck and was still dripping wet when I heard: “Chey! Whales!” I hoped to get a blue whale on film, so I grabbed the camera and joined him in the cockpit.

“It was ten feet off the starboard beam,” he said, looking around. “I’m not sure kind.” While he was fumbling with the lens cap, we saw the second spout twenty feet off our bow and a creature surfaced with a tall, jet black fin and a wide, ebony colored dorsal arc suggesting it was around 25 feet long.

Too big for a dolphin, too small for a blue whale. Humpbacks weren’t smooth and black. Our minds tried like mad to process what were we looking at, what leviathan was swimming under our bow. Just before it dove, we glimpsed the telltale black and white eye pattern you’ll recognize as quickly as we did: Orca. 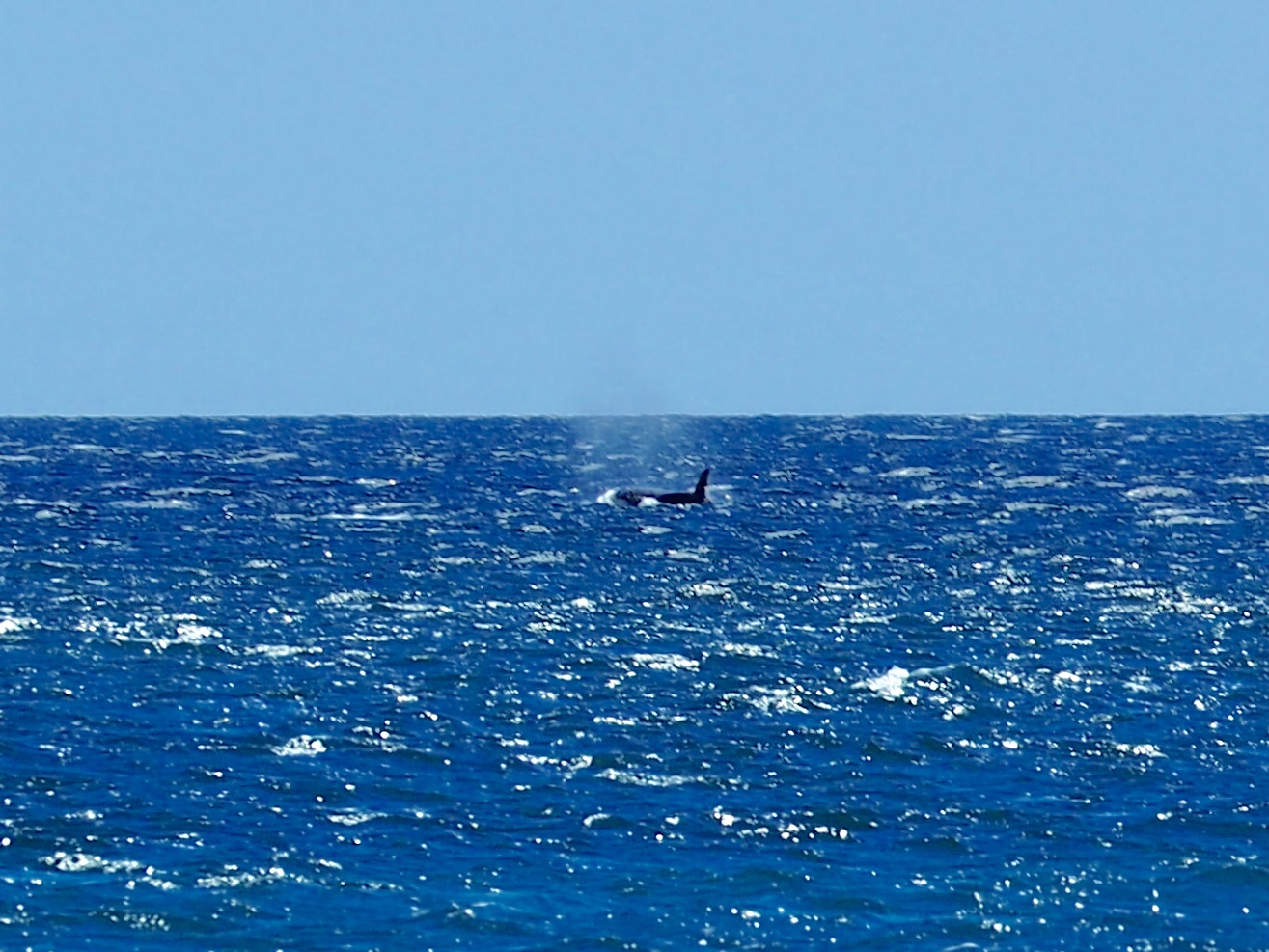 He was far away by the time we could get off a (bad) snap, but the mental photos of this guy surfacing just off our bow are seared into our brains forever

The word orca comes from the Roman god of hell, related to the English word ogre. In Spanish, one name for the species speaks to their unique skill: ballena asesina, the Assassin Whale.

Several four-letter words were first breathed as whispers, then loudly emphasized as we realized a killer whale had been within striking distance of Colin the whole time he’d been in the water. There’s a reason that swimming with dolphins is a relatively common tourist activity, while swimming with orcas is definitely not.

While humans are not their natural food, playtime can get rough. “The killer whale is quite capable of snapping a seal or porpoise in half with a single bite.” - Bruce Halstead, Dangerous Marine Animals

As we watched, there were more fins. A small pod of possibly five killer whales moved to a rocky point two hundred yards away from us and hung out about ten minutes, likely chasing the sea lions we’d seen there earlier.

Unfortunately, the bulk of their hunting was underwater, and when they finally surfaced far away, our Olympus’ auto-focus decided the foreground waves made for a better artistic composition than the freaking pod of freaking killer whales a few meters farther away. Thus, all we have to share are more of those blurry Loch Ness monster-like photos—just clear enough to confirm our identification and prove to ourselves that we hadn’t gone loco in the Mexican heat.

After checking the reference guides, it turns out the Sea of Cortez is a totally valid place to encounter an orca. (Um, maybe we should have read that page sooner.)

While killer whales are more commonly seen in a few places such as the Pacific Northwest, that’s only because certain groups stay in one place. In reality, killer whales are the world’s most widely distributed cetacean species. Transient groups of perhaps 50 or 60 small pods are found all over the planet. It’s just that they range over such a wide area we rarely spot them in the wild. But rare doesn’t mean never, especially if you’re on (and in) the water every day. A rancher we spoke with in Timbabiche had never seen them, while a fisherman in the same spot had.

“The LA Pod (of killer whales) is small, but infamous, because a member of this group killed a Great White Shark in plain sight of a whale-watching boat off the Farallon Islands in 1997, with the episode caught on videotape. The LA Pod ranges south to the upper Sea of Cortez in Mexico and north at least to the Gulf of the Farallones.” - Allenson, Mortenson and Webb, Field Guide to Marine Mammals of the Pacific Coast

Somehow every year we watch shark week with terror while the true apex predator of the seas is beloved as the smiling Free Willy. To be fair, everything has to eat. Members of orca pods often stay together for life and killer whales are technically the largest member of the dolphin family. Most experts don’t think they go after humans on purpose—at least not most of the time.

They are truly amazing and majestic creatures. But just to be safe, I chose a sponge bath that day. 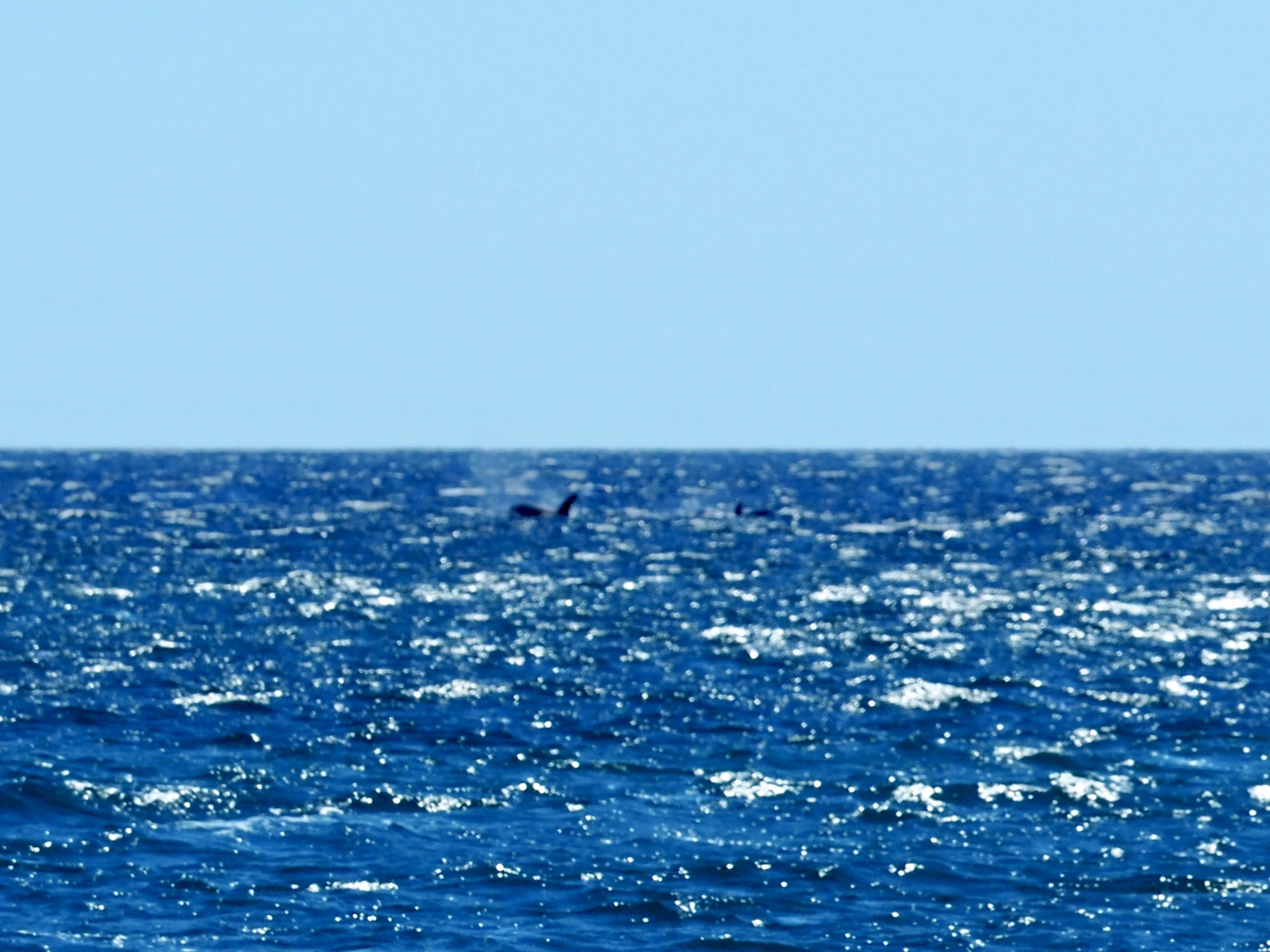 We spent most of the last month in isolated places without a hint of humanity—just cacti and sagebrush and red tinted mountains that would have you believing we sailed right into a Clint Eastwood movie. We tucked ourselves into empty coves that seemed unchanged for millennia, with snorkeling reefs like we’ve never seen.

The couple of lightly inhabited places we visited didn’t have electricity, much less any other services. In fact, the one time we found a tiny little market with a propane refrigerator, we did a little dance of dairy product excitement.

Occasionally, we also got to share these splendid bays with a couple other boats, which gave us the opportunity to meet some truly fantastic people. 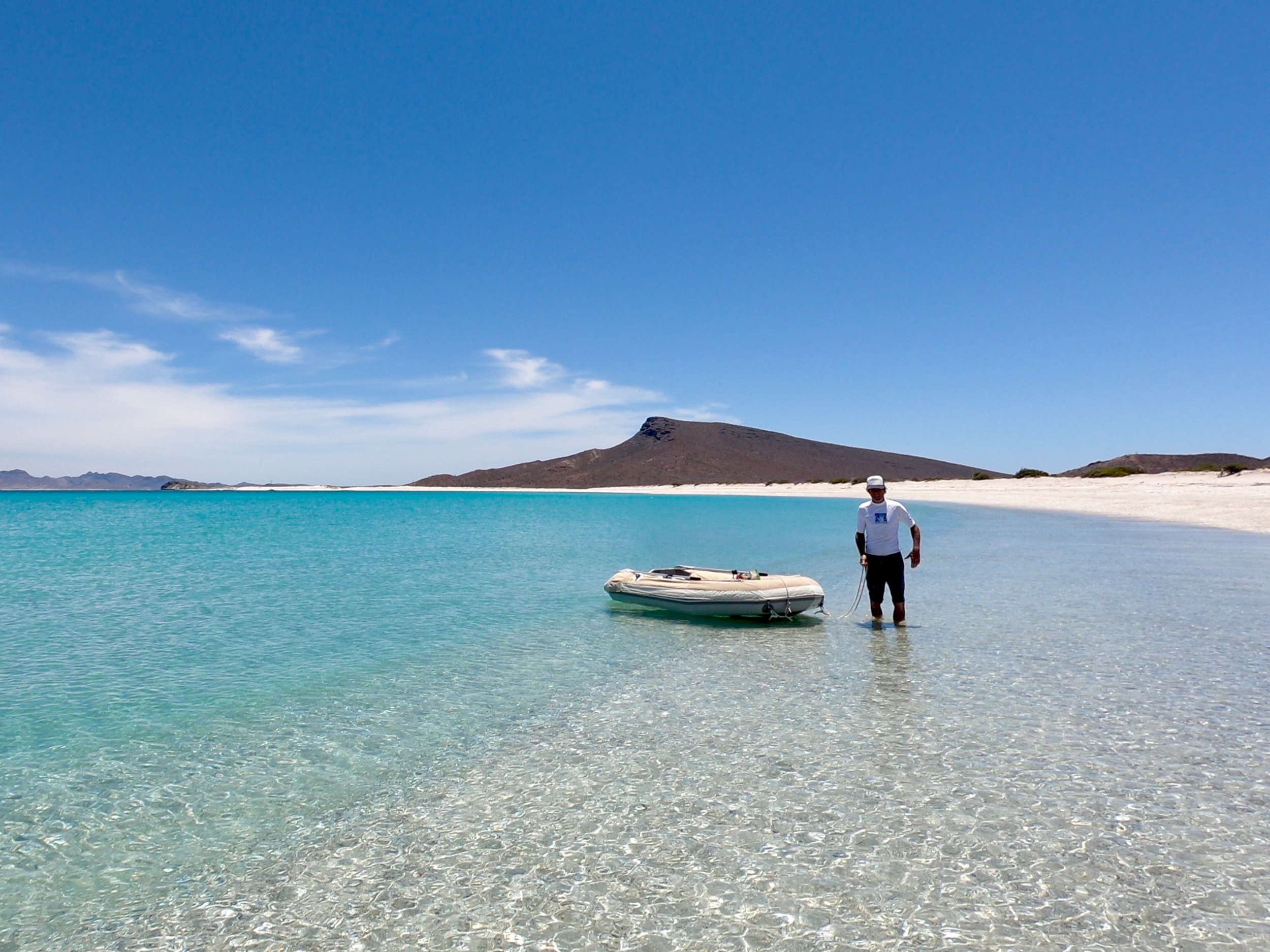 This entire bay at Playa Bonanza was ours alone for three days of bliss. The beach was so long, Colin decided towing the dinghy was easier than rowing it. :) 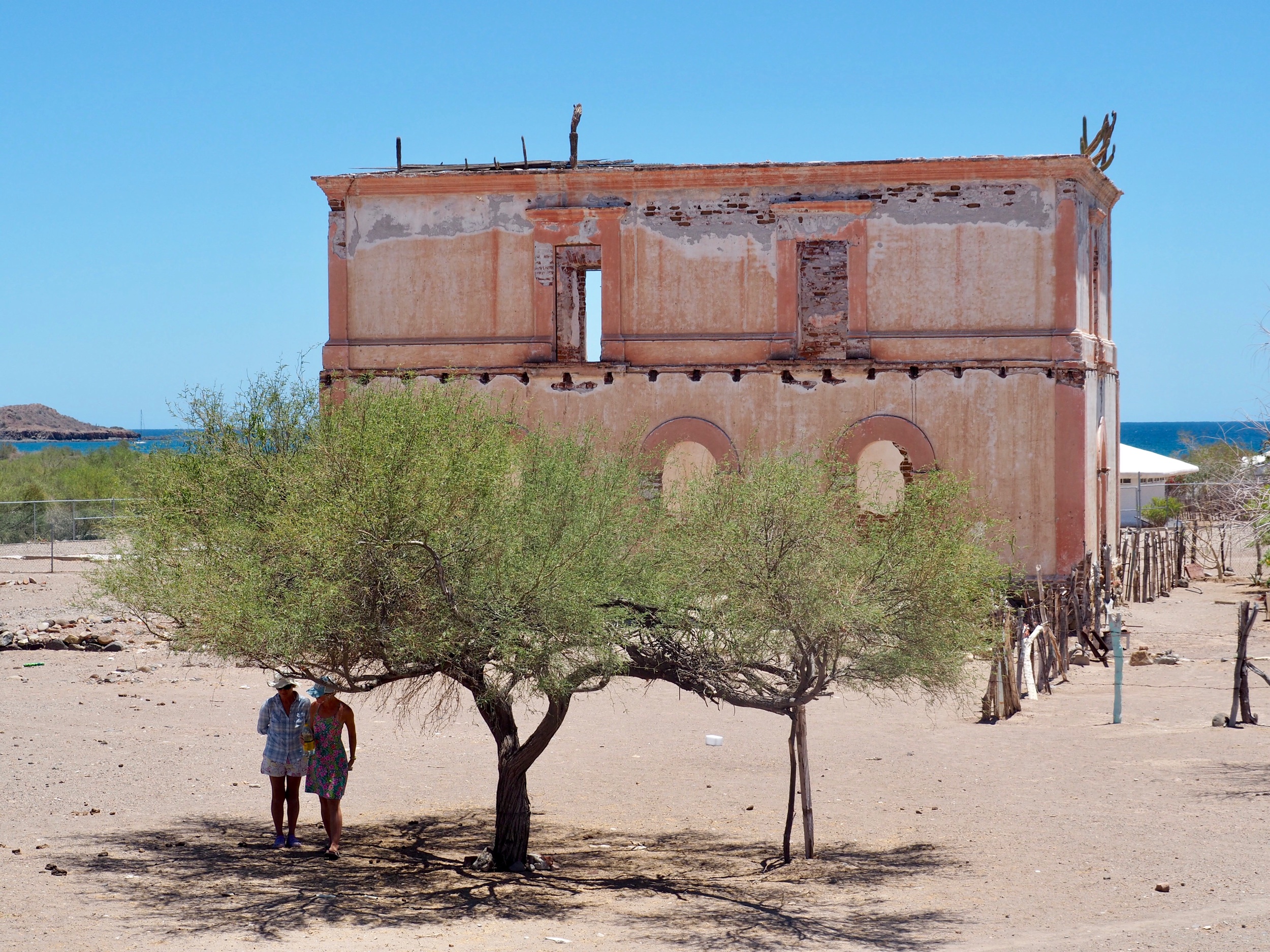 Exploring the tiny village at Timbabiche with our new friend Allison. The ruined home in the background belonged to a pearl diver who once had very a big find. His grandson Santos still lives here and told us the pearl was roughly the size of a golf ball. The inspiration for Steinbeck’s story, perhaps? 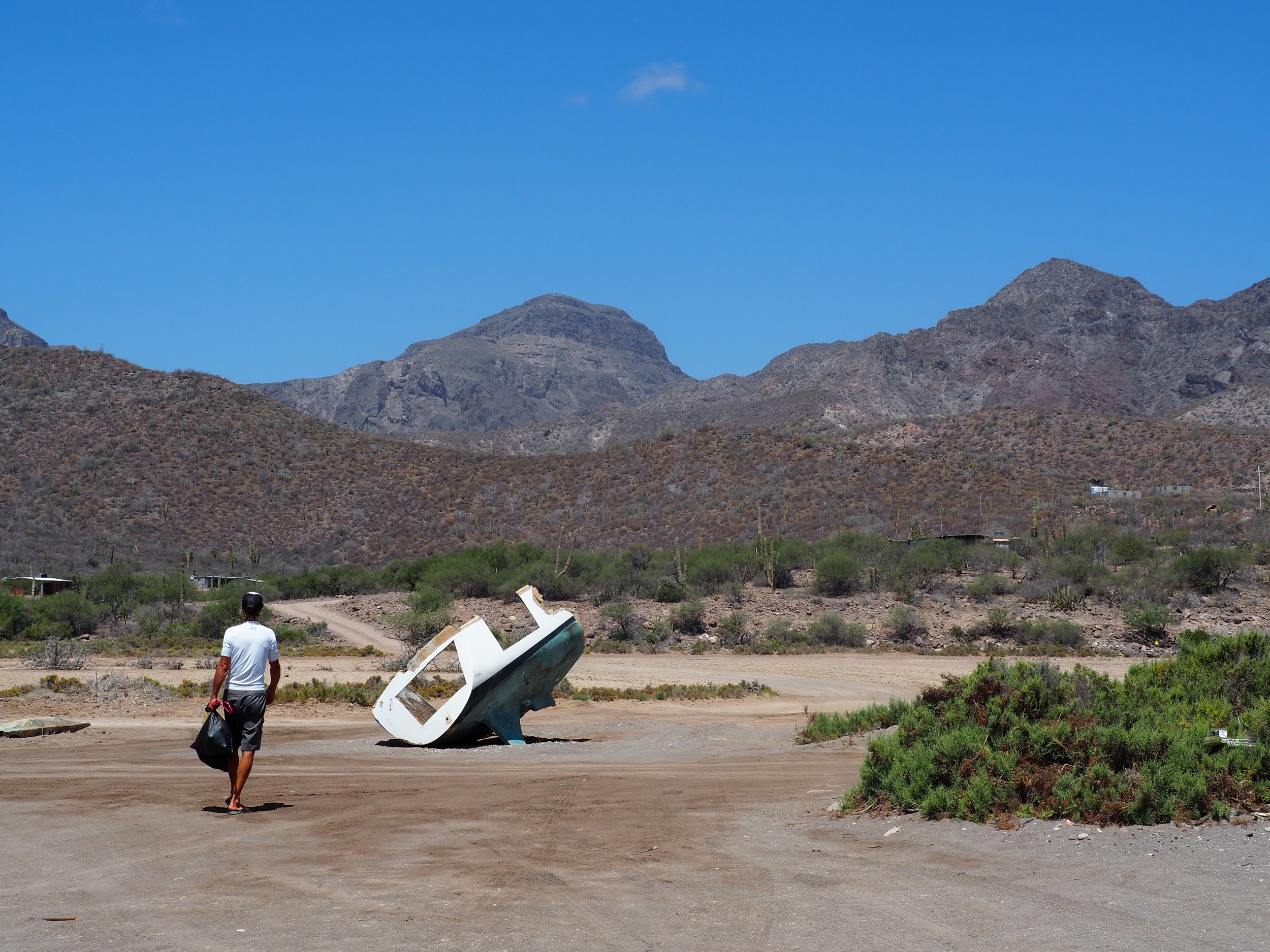 Scenery in San Evaristo was straight out of a TV western — with one little incongruity. Two, if you count Colin on the hunt for a garbage can. 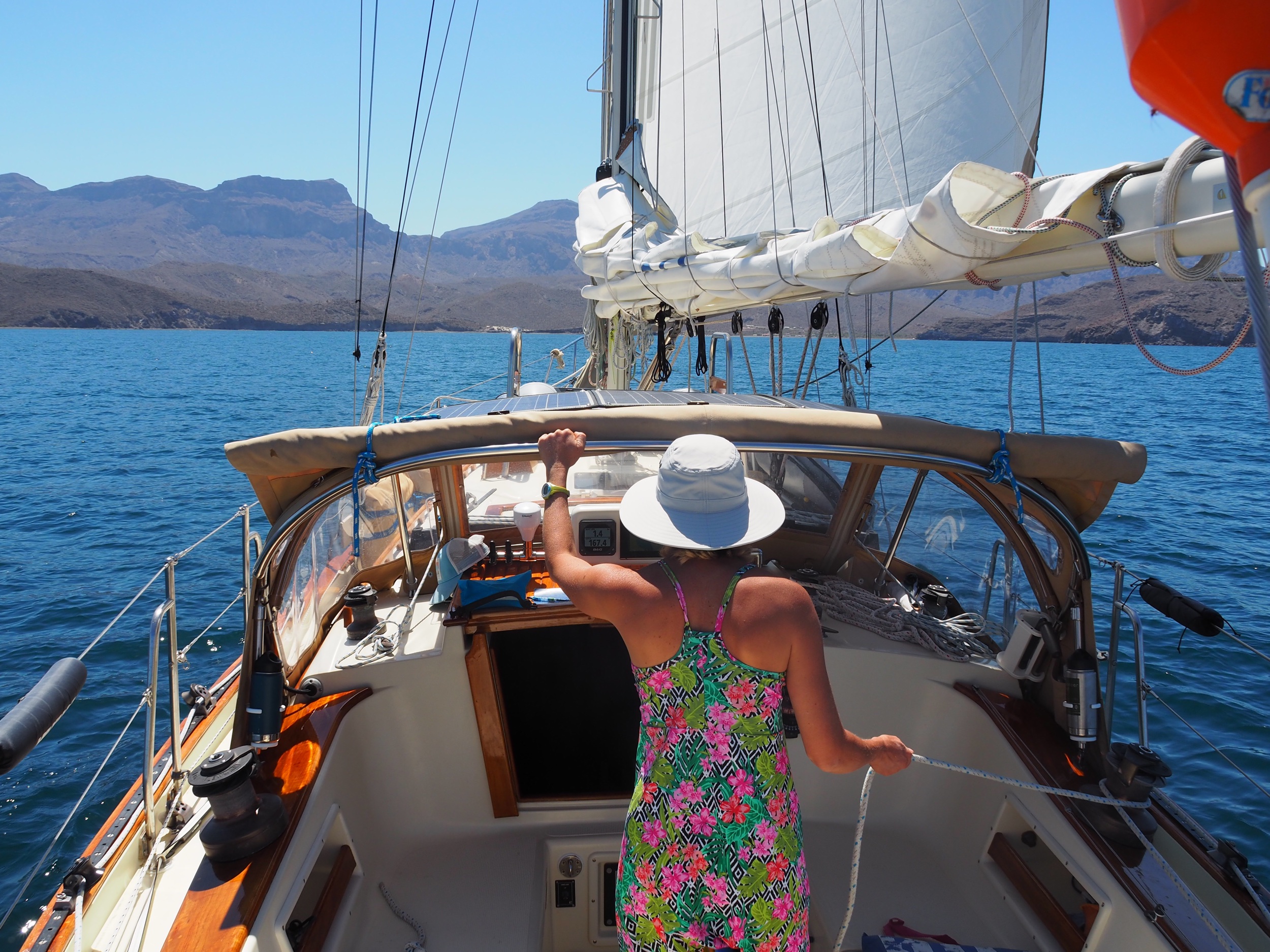 Light air sailing with just the jib as we steal every bit of pressure we can out of four knots of wind to push us slowly into an anchorage. Sure, we could have fired up the motor and saved ourselves a few hours but where would be the fun in that? 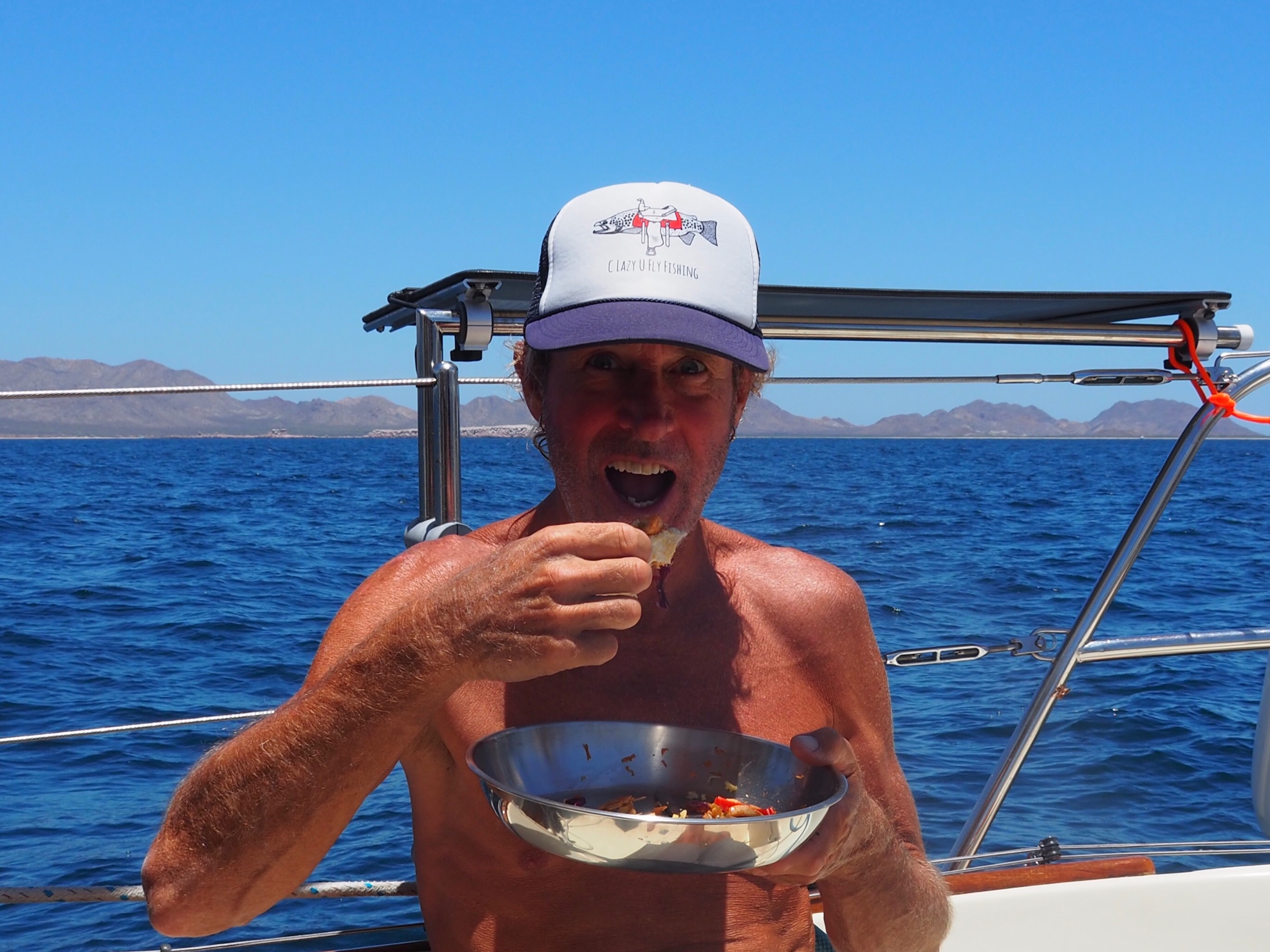 I’m lucky enough that Colin makes this face pretty much every time I put a plate of food in front of him. 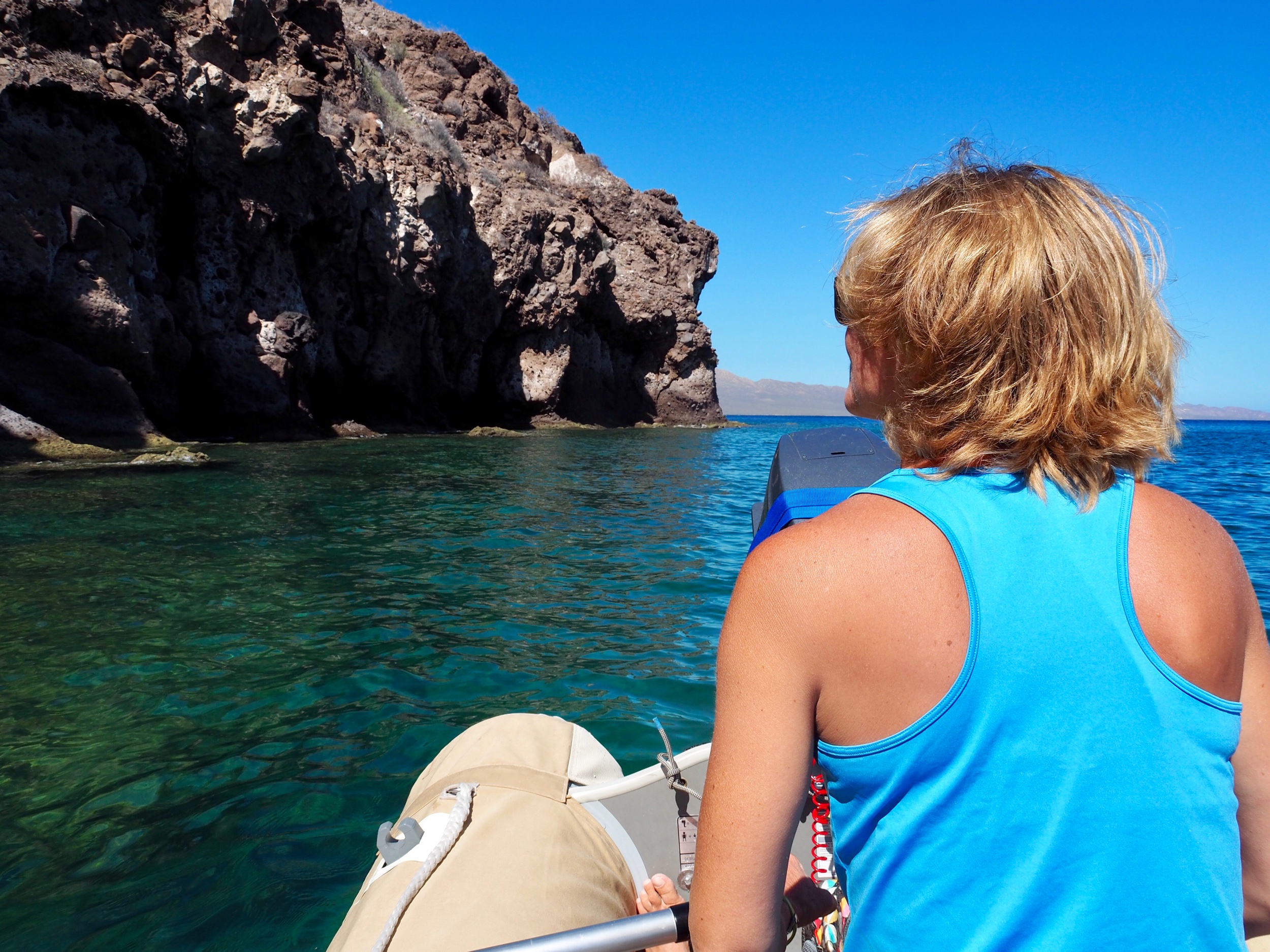 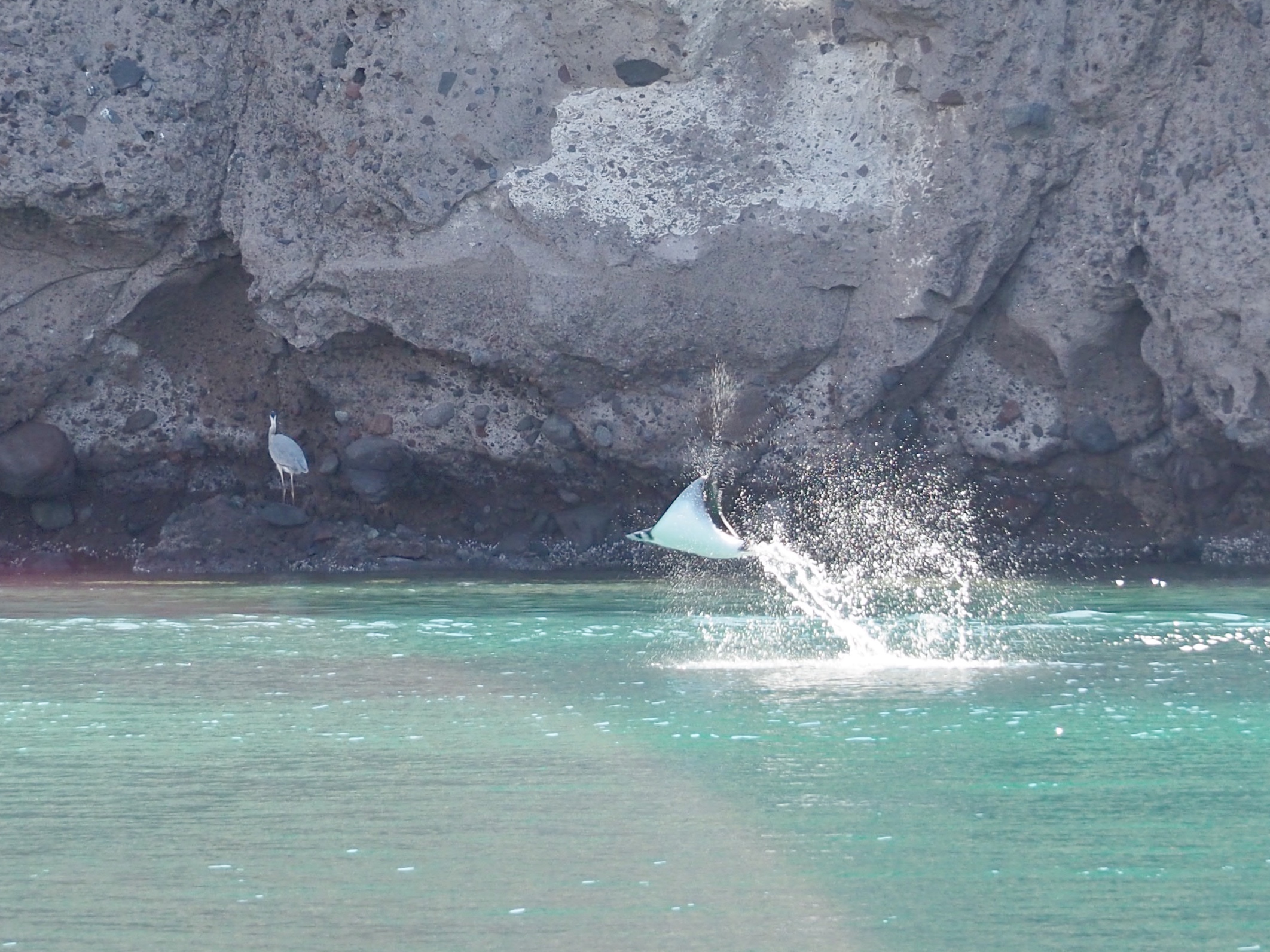 File this under things that never get old. A mobula ray (type of manta) launching himself into elegant flight, just before he finishes with a far less elegant belly flop to knock off any parasites trying to use him for a host. Nearly every evening we hear the telltale thwacking and get to watch several dozen of these amazing leaps. 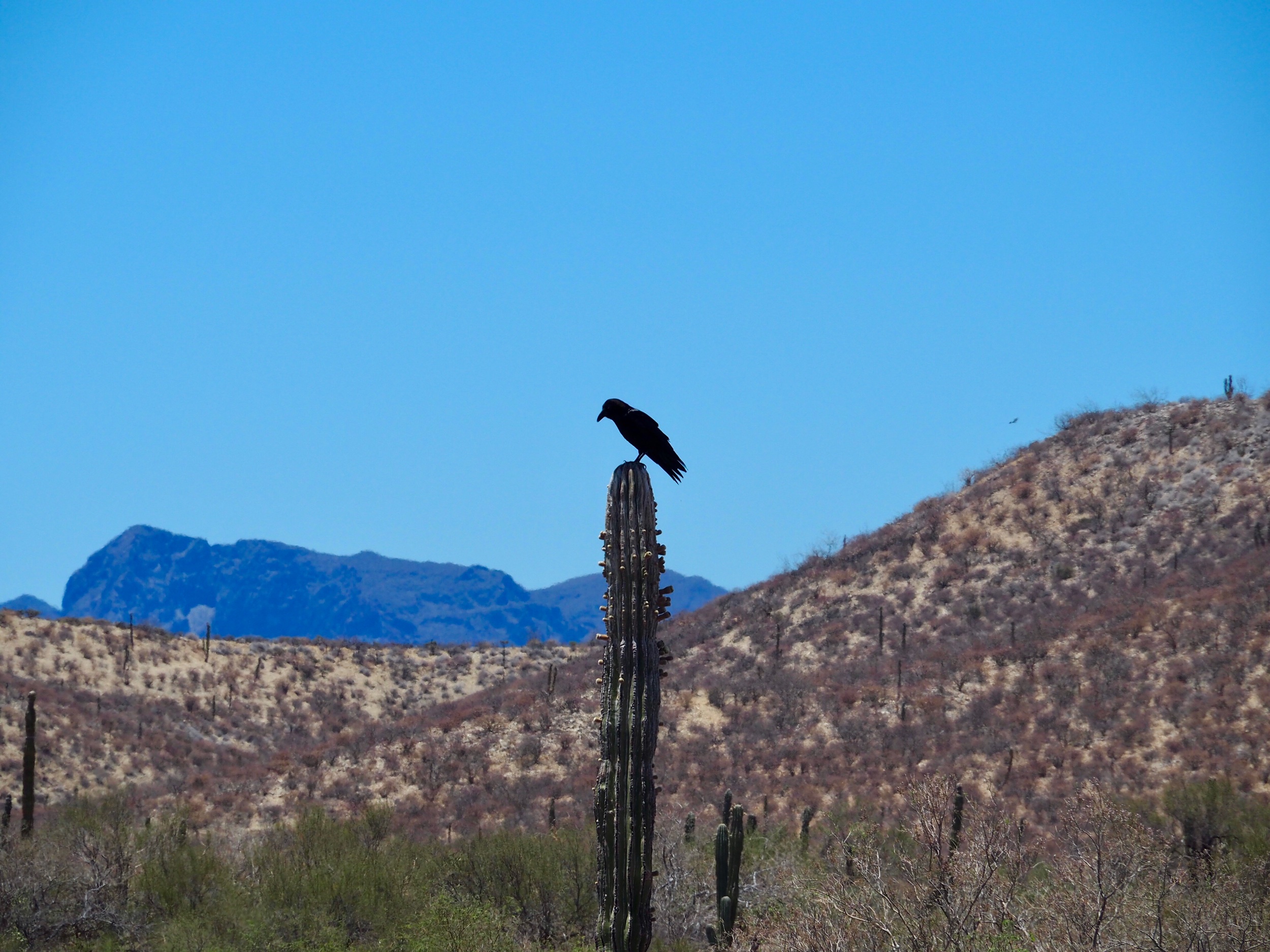 On the other side of the water there is land. And oh, what a contrast. I see a bird and a cactus in this photo, but Colin sees a scene from a Stephen King movie. I think I like my perspective better. 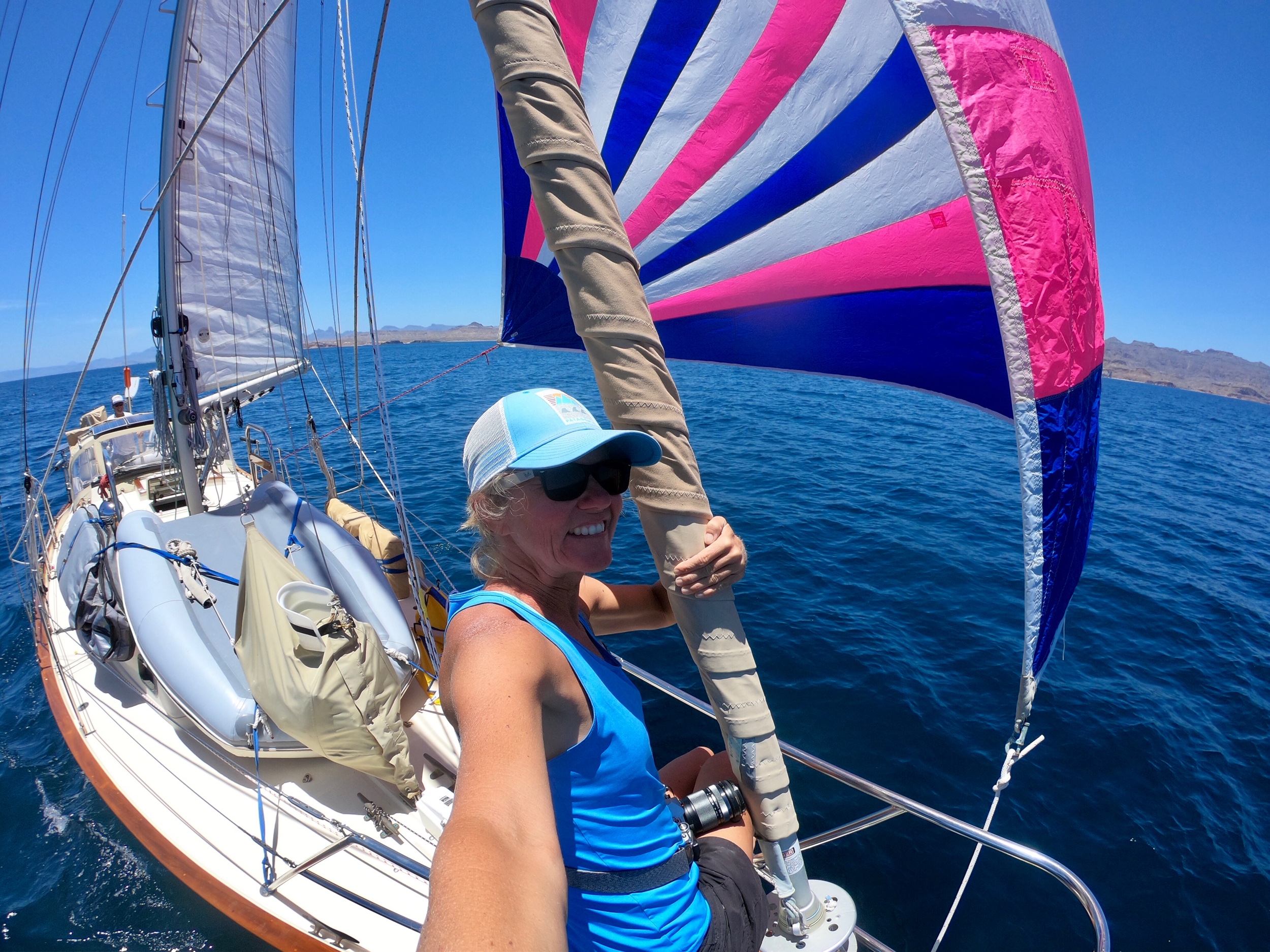 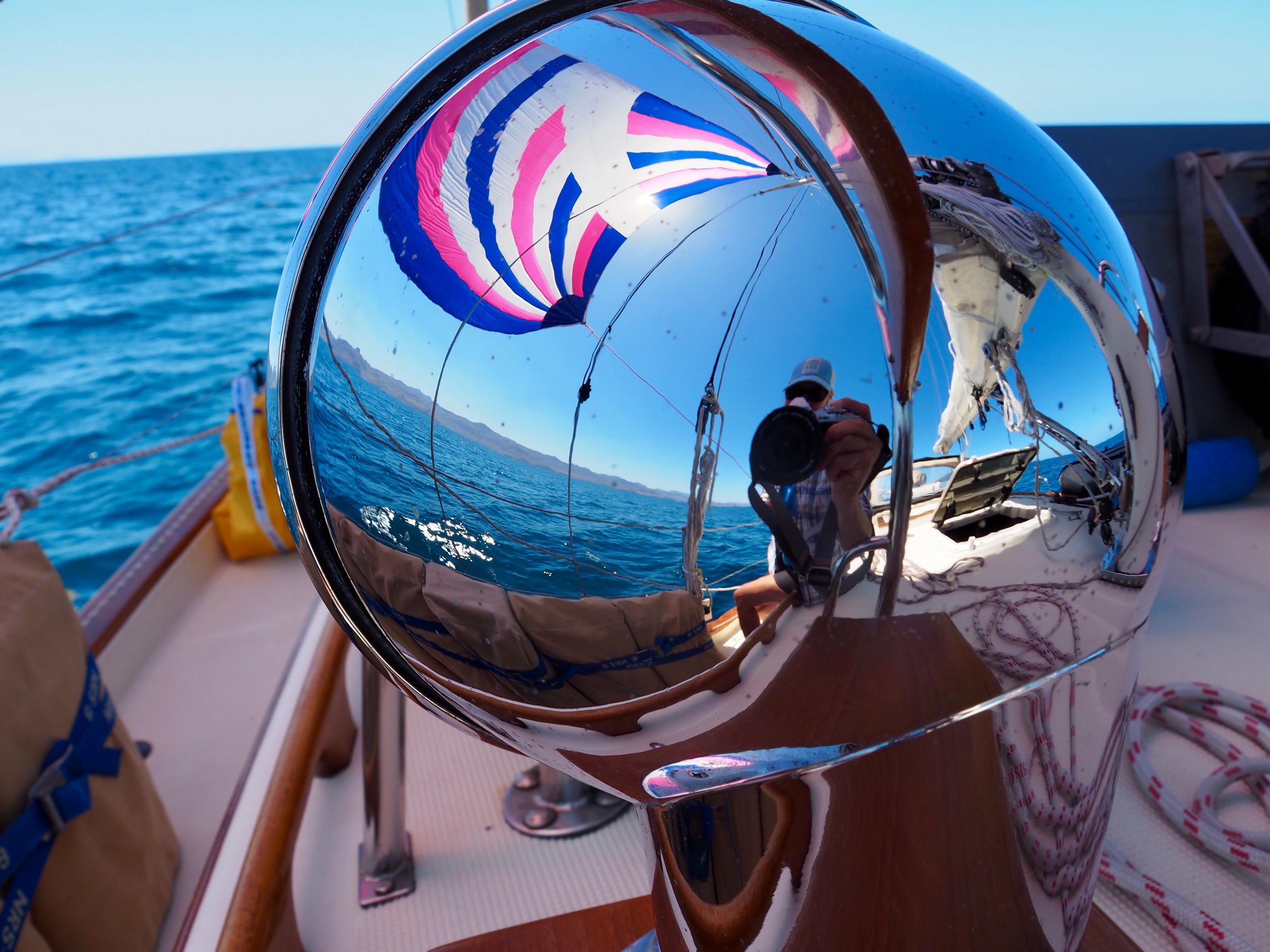 The trade off for light air? Spinnaker weather! (Technically, since we’ve flown heavy race kites in 30 knots, I should say the right conditions for the light 155% spin drifter we have aboard.) 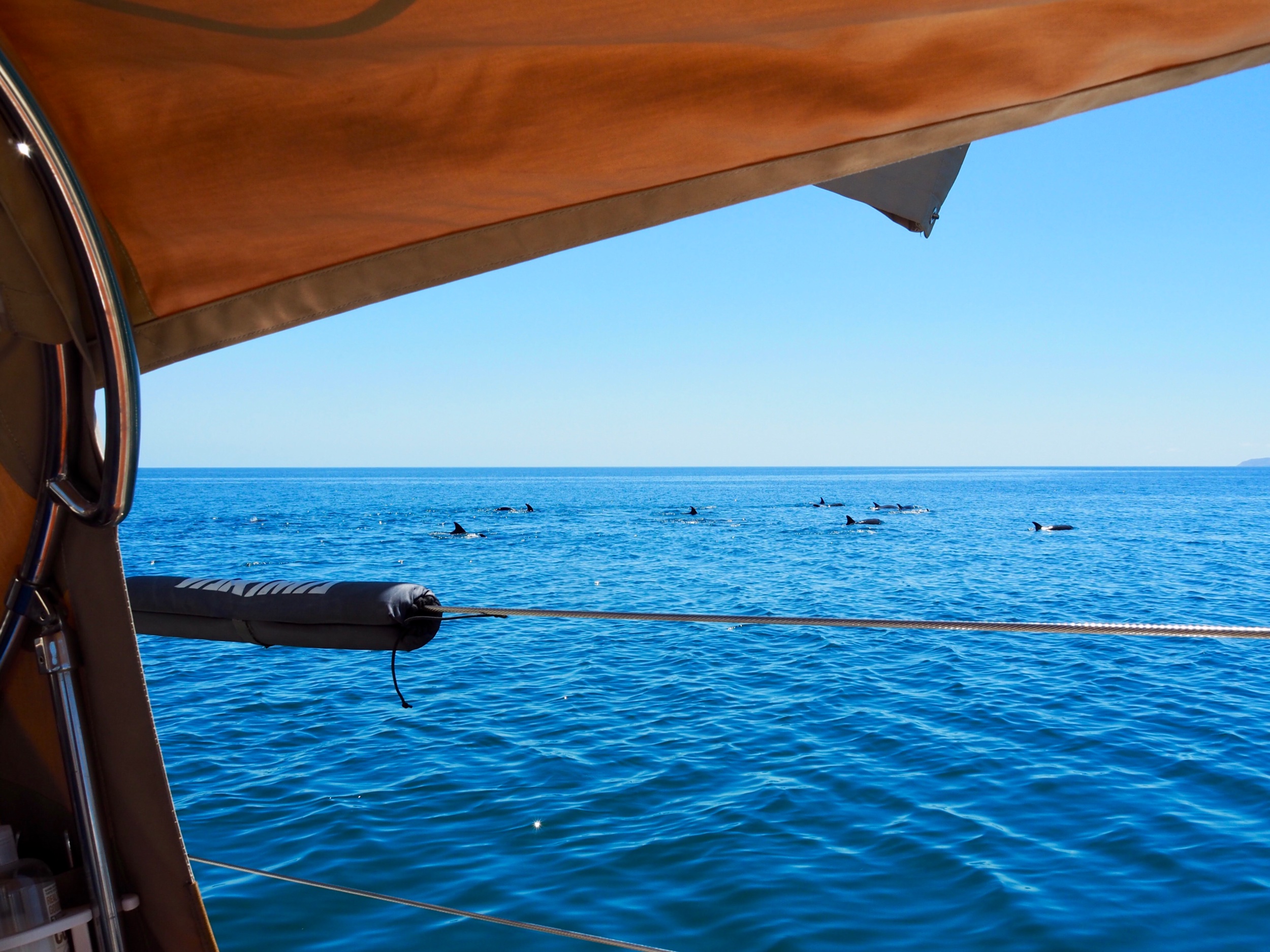 What else never gets old? When huge pods of dolphins circle your boat several times a day as they feed. 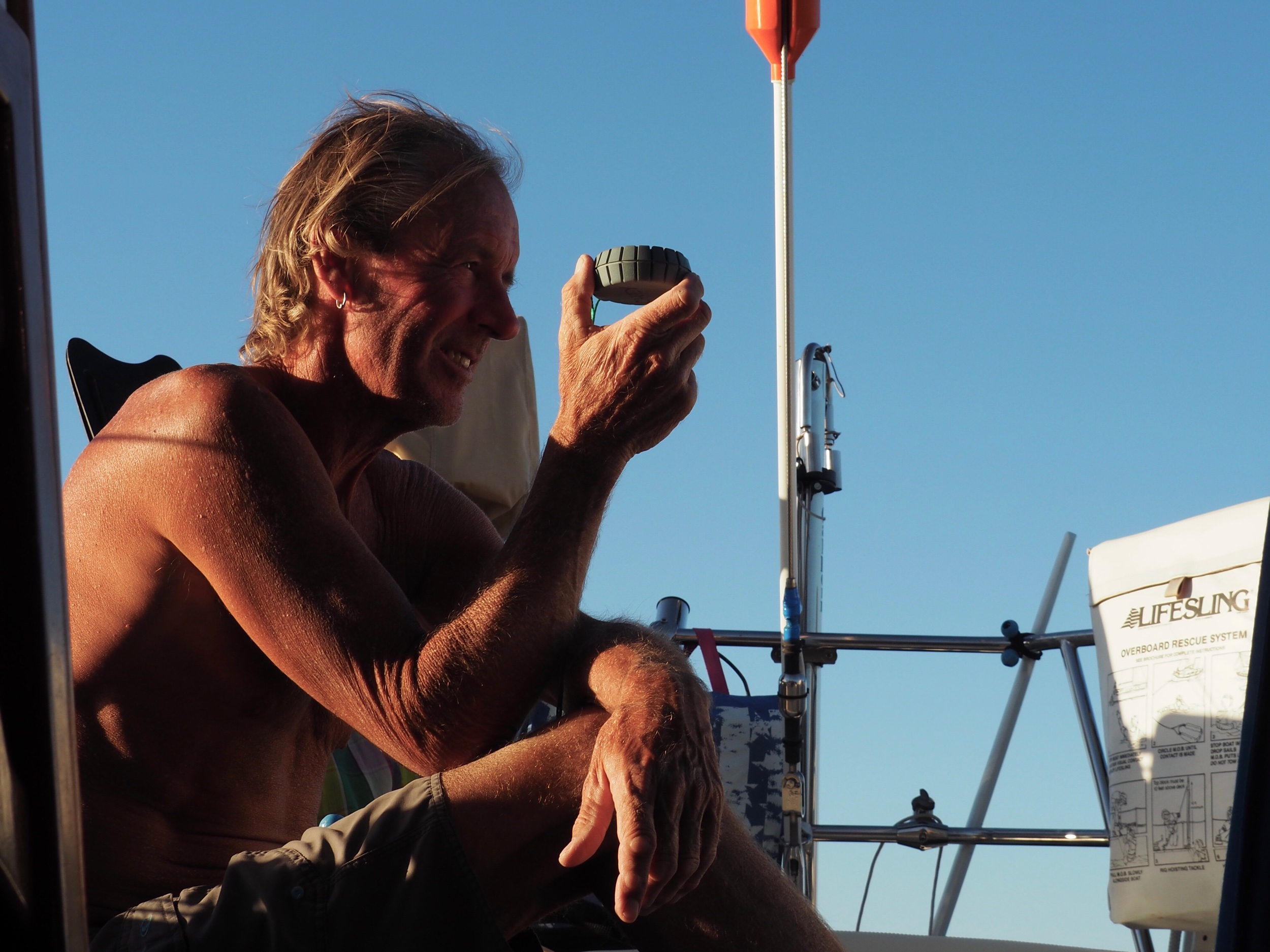 The good captain checks his bearings as the evening westerlies whip through the anchorage. 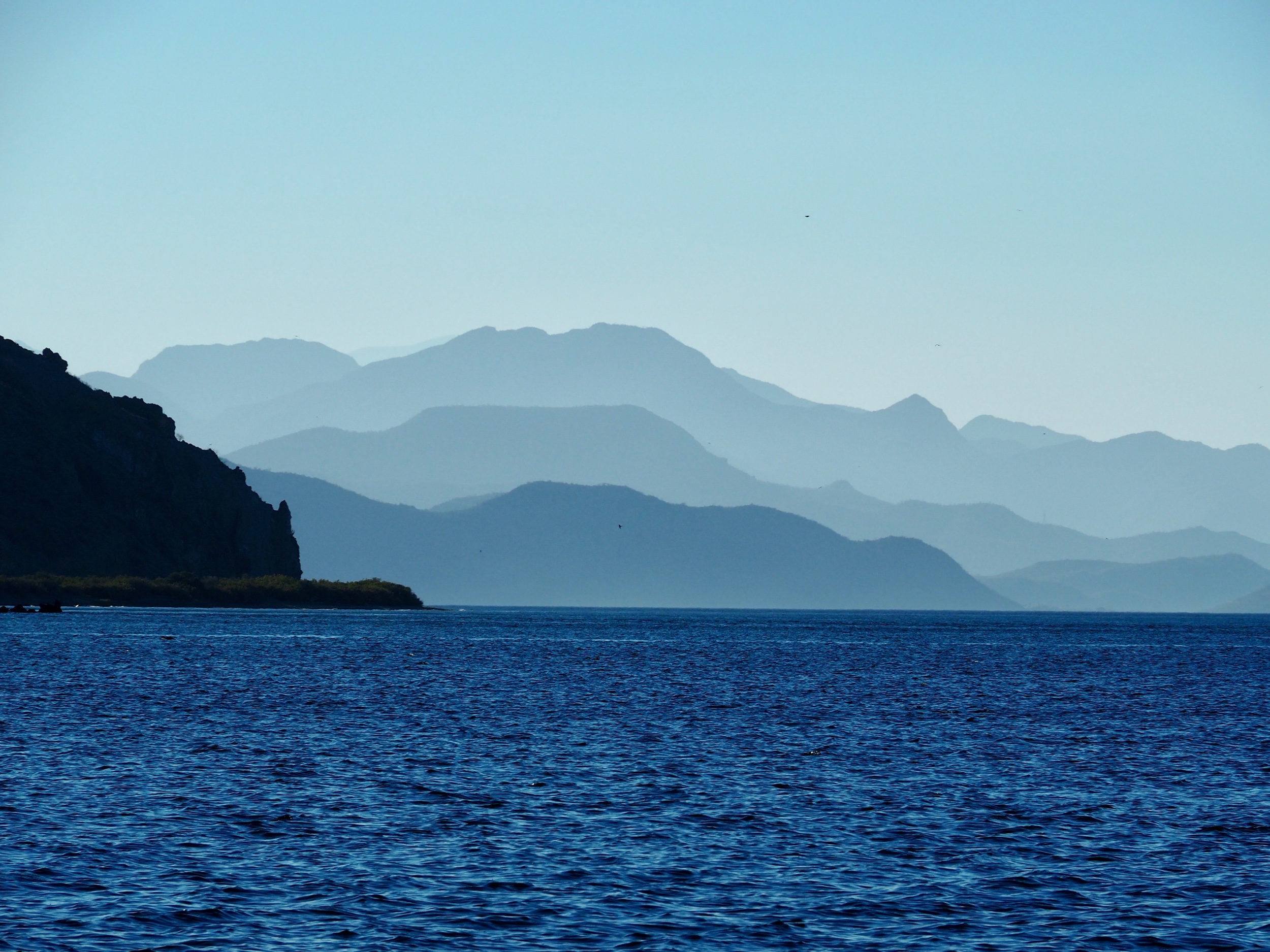 We’re not sure if the peace of landscapes like this will ever get old. We’ll have to do some more research and get back to you on that one. :)

Getting to experience such unique places has been an amazing experience and we’re excited for more, but we are also coming closer to a necessary provisioning stop in Loreto. So after a personal record of 23 days entirely off the grid, we anchored off a swanky resort in a place called Bahia Candeleros, and (for a day or two) are making use of this crazy newfangled thing called Wi-Fi. 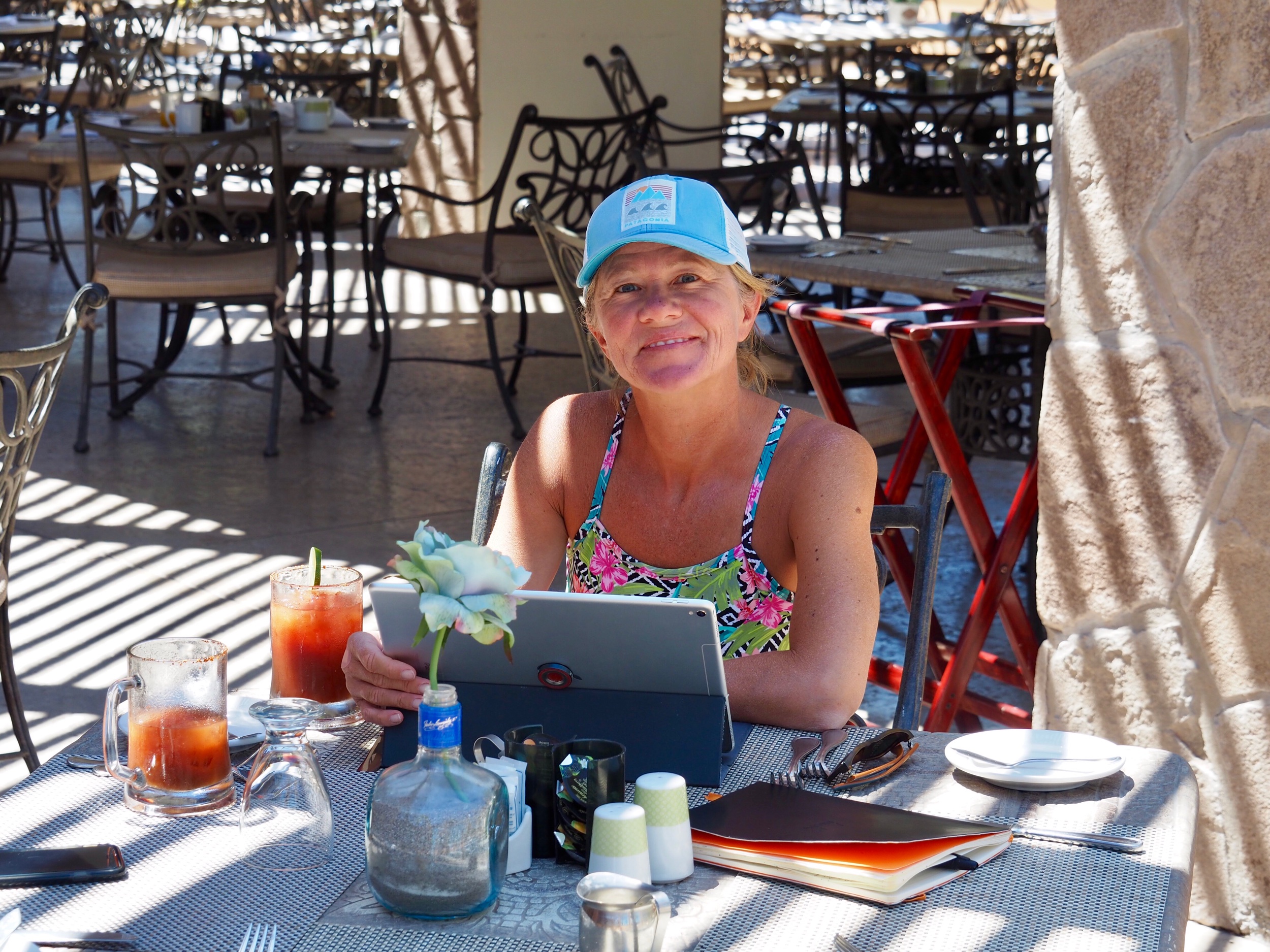 Wi-Fi for the price of a couple of Bloody Marys. Worth every penny! 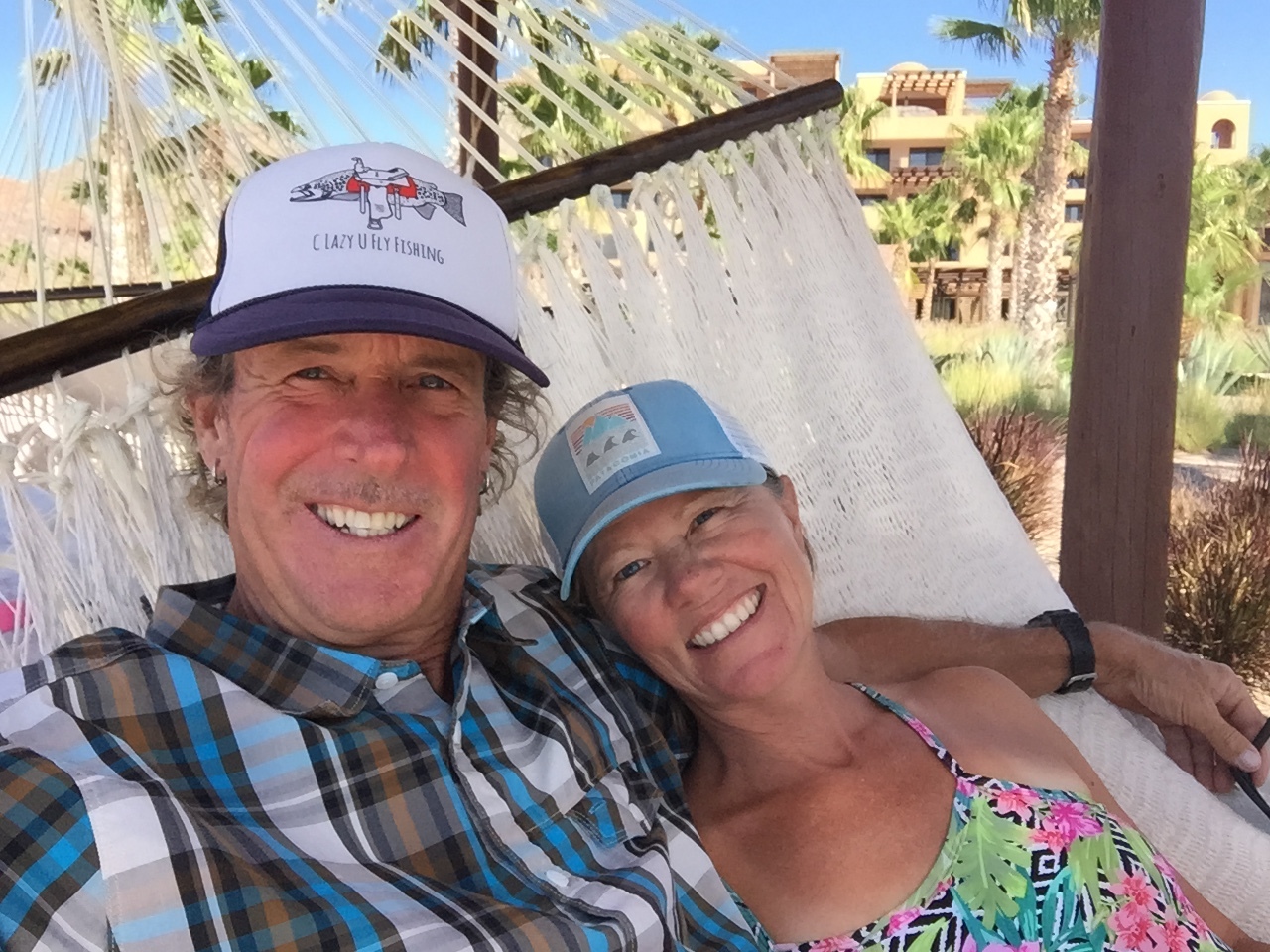 There were some other advantages to the hotel facilities that we took full advantage of after a full day of emailing, updating apps, downloading Spanish lessons and all the other digital errands we’d set aside for many weeks.

Mary and Rich of SV Chatelaine heard us mention we were running low on a critical supply and the next thing we knew, they’d motored up with the incredible gift (out here at least!) of a stick of butter. You guys are way too kind to share such precious provisions.

We were also thrilled to meet Derek and Allison of SV Arielle who not only took us ashore for a great walk when we were too lazy to launch our own dinghy, but invited us aboard the mother ship and treated us to a proper English tea (Earl Grey from Marks & Spencer no less). Porcelain cups and biscuits even. We absolutely love how even though they’ve cruised 14 years, from the South Pacific to the Med to the Caribbean, they remain curious and engaged and respectful at every turn, without the opinion-itis that can so easily go hand in hand with experience. And in one of those exceptional ‘What a small world’ moments, it turns out Allison is from Colin’s hometown of Bangor, Northern Ireland. Clearly, we were meant to meet these wonderful people!