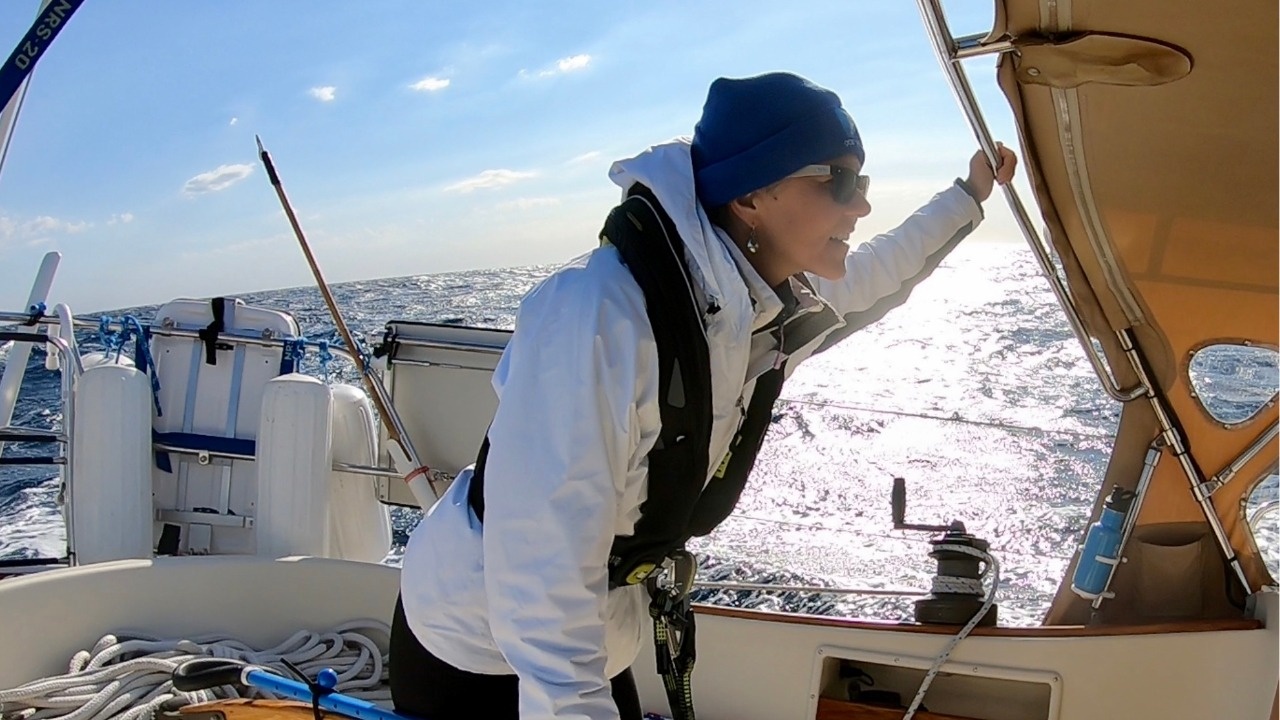 RUNNING WITH THE GENERAL

General Santa Ana was an unpredictable, shape-shifting politician and dubious military leader who helped Mexico gain independence from Spain, then lost more than half her territory to the U.S. There are various origin stories for the wind phenomenon that shares his name, but one thing’s for sure—the infamous Santa Anas mirror many of the General’s more disastrous characteristics.

In the winter months, a buildup of high pressure over the deserts of Utah and Nevada can lead to a 2.5 millibar pressure difference from the coast, pulling north easterlies down over the mountains, then through narrow mountain passes where they get pressure cooked by compression, creating gusts that can exceed 60 knots. On land, this means wildfire danger. At sea, the Santa Anas have wreaked havoc on mariners for centuries.

This became directly important to us the other day when the first Santa Ana of the season was forecast to arrive early in the morning at a blustery but reasonable 25 knots. We were sitting safe and happy in a slip at the Coast Guard dock in Newport in front of a pretty little beach. It had seemed as good a place to ride out the blow as any until a lifeguard reminded us of a consequence of strong winds we hadn’t considered: “Prepare to be sandblasted,” he said.

That was the end of that good night’s sleep. We imagined sand in every block and winch, sand scraping off layers of gel coat and varnish. We decided not to stick around and find out all the ways we could suddenly hate sand.

We were up at 2am, 3am and 4am making sure the winds hadn’t kicked up yet. By 5am we saw 5 knots and decided it was time to leave. By the time we cast off the dock lines, 17 knots blew us out of the slip, while the Coast guard raised the small craft advisory flag.

We weren’t especially concerned, as we’re pretty used to higher winds and Pristine is stout, so we headed for Cat Harbor on the back side of Catalina.

As we rolled out the jib for some boisterous downwind sailing, it was already gusting to 25 and it occurred to us we should have rigged the staysail instead. By that point, though, we decided that even tethered, we’d rather not go forward in the dark to pull it out of the bag, so we reefed the jib way down to a jiblet and had great fun rocketing downwind, surfing down the following seas as fast as 8.5 knots for brief stretches.

Soon the sun was up and we were enjoying ourselves enough to wander around the boat, taking pictures of us screaming downwind. Meanwhile, as we listened to Channel 16, it sounded like an especially busy day for the coast guard. One boat was disabled, another dis-masted. A 50-footer had trouble maneuvering. The winds kept building to a steady 30. Then 35, and we looked forward to getting around to the backside in the lee of all this wind.

When we did finally come around and turn up from a run to a reach, the katabatic effect had increased the true wind speed to 42 and the apparent to 45+. Suddenly, the pressure was too strong to furl even the tiny handkerchief we flew from the forestay.

We had a few moments of—ahem—discussion about next steps as spray soaked us and the cap rail remained firmly buried in the sea. A little adrenaline was involved, and we probably put more pressure on the rig than we should have, but we once we turned away from land, lessening the funnel and reducing our apparent wind, we furled the sail with a great deal of effort.

With the sail stowed, we found a refuge anchorage and finally found a windbreak about 100 feet off the cliffs. We dropped the anchor to wait out the blow and finally had lunch and a welcome swim break. Within a few hours, the winds were so dead we had to motor the rest of the way to Cat Harbor.

Our friend Bob is fond of saying wisdom results from experience, and experience results from lacking wisdom. Turns out the east end of Catalina was as good a place as any to get some gale force wind practice and learn what happens when you have the wrong sails up.

As for Pristine, she will always be a better sailor than the both of us put together. I feel like she’s just sighing gently through her rigging and saying to herself in a wise old grandmother's voice: Ah, here we go again. I have to train up the new owners and help them figure out how to sail me right. But she is a patient teacher and we are pretty darned determined students, so little by little we’re learning.

We spent a pretty darned fabulous week in Cat Harbor, with cloudless days, star-filled nights and a lot of chilling on the foredeck in the sunshine, reading up on Mexico, treated to a fabulous dinner by Steve of SV Sara’s Perch and meth fellow Crealock 37 owners & Mexico-bound cruisers Phil and Julianne of SV Epiphany. We can’t wait to run into those guys again down south.

As for our next steps, your guess is as good as ours. Hurricane Willa and Tropical Storm Vicente are getting ready to pound Mainland Mexico—well south of Baja, but still nothing we want to mess with. Apparently, this has been the most active Pacific Hurricane season on record, but luckily, we’re in no rush, and one thing we know well is that Mother Nature is always in charge.

In loving memory of Tom Arthur: devoted husband and father, positive role model and irrepressible spirit. He will be deeply missed. 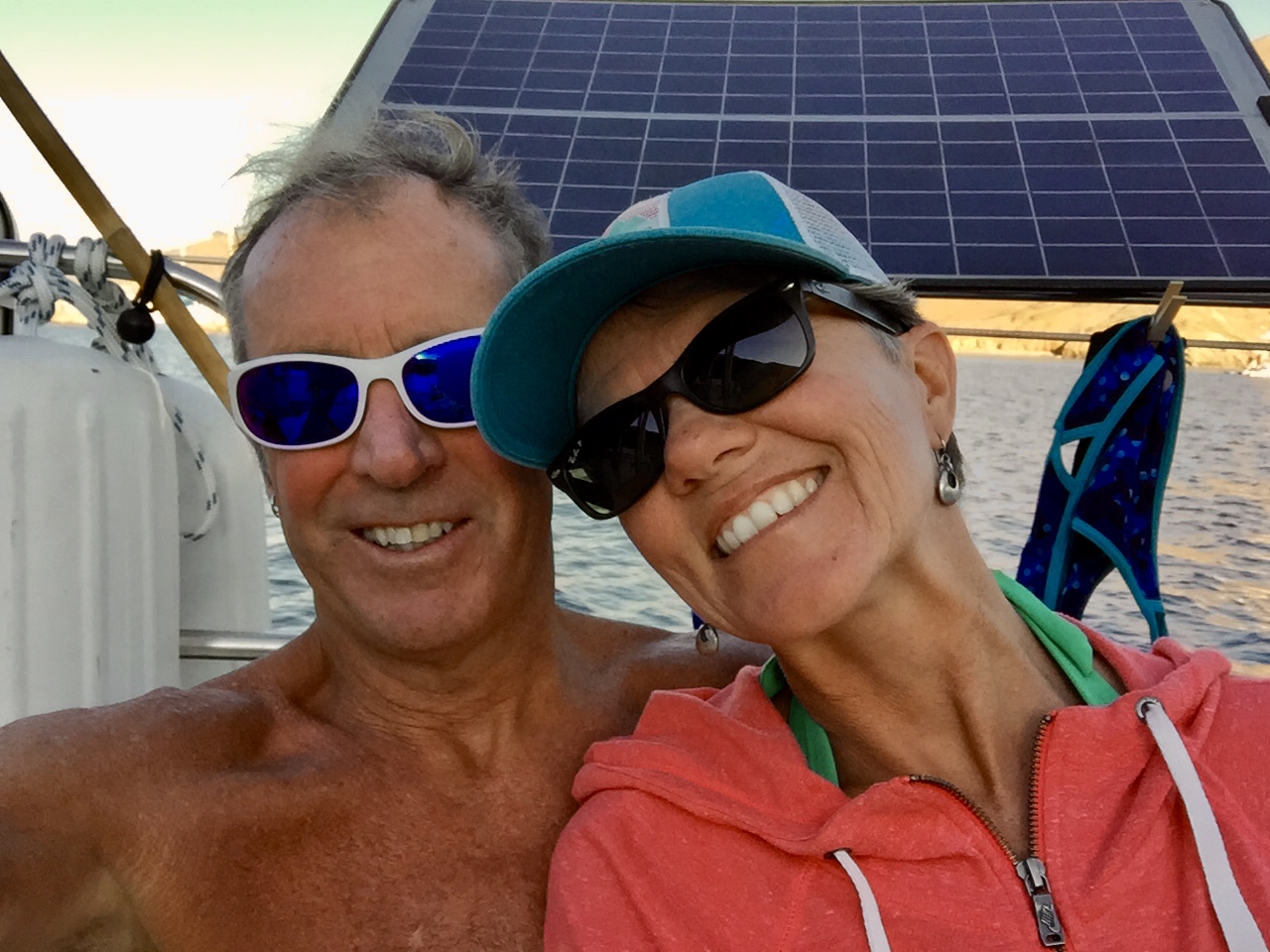 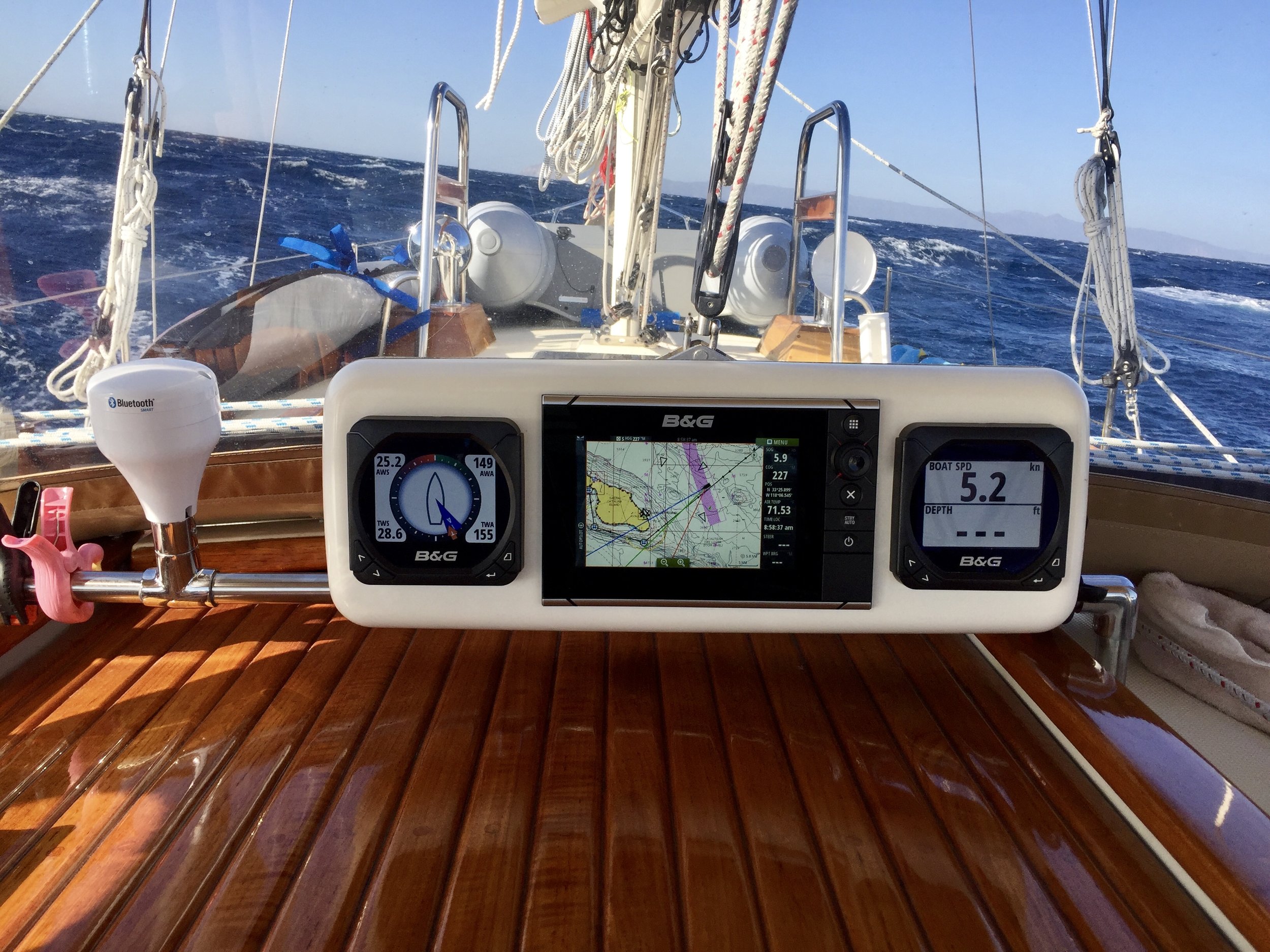 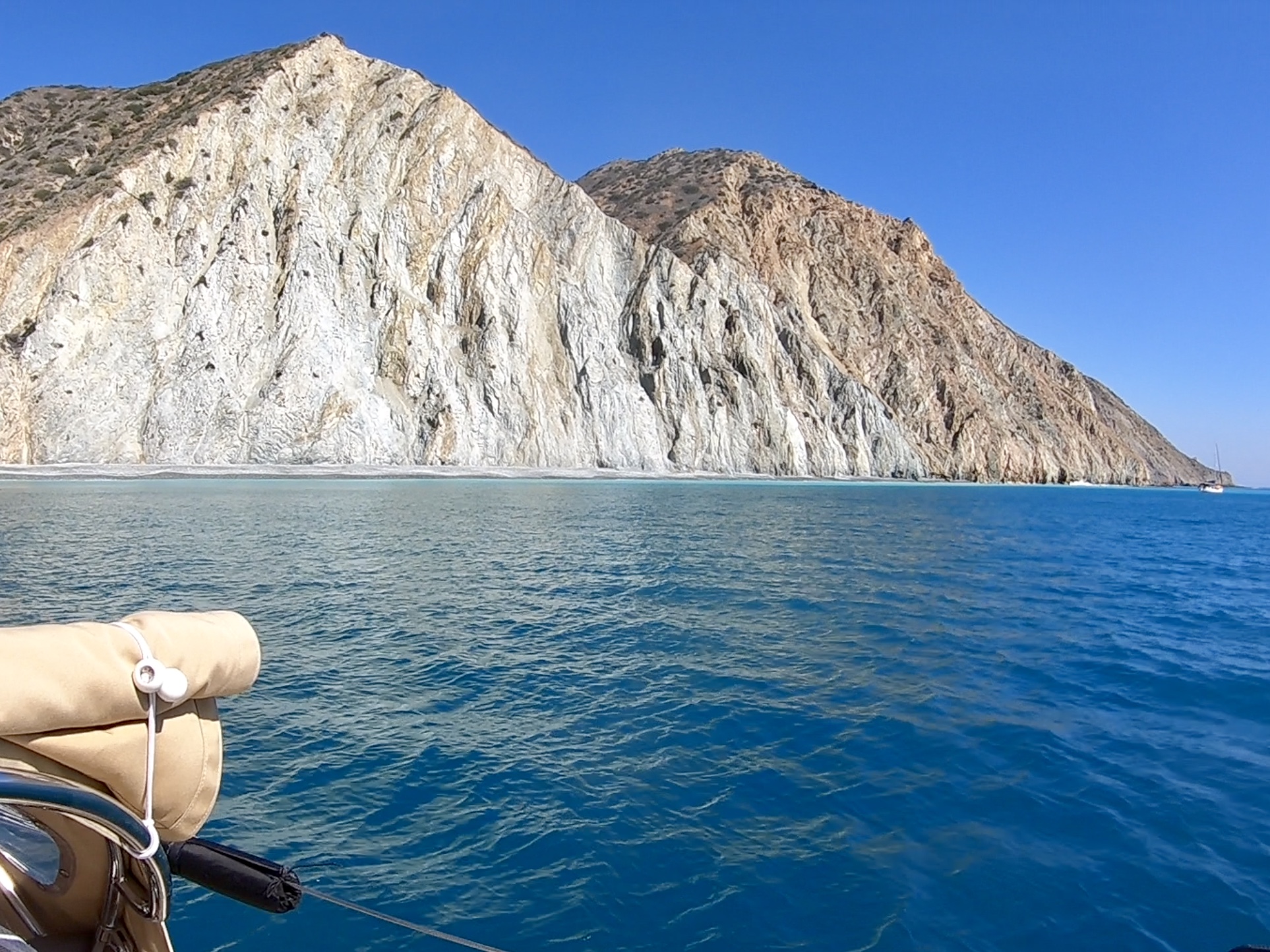 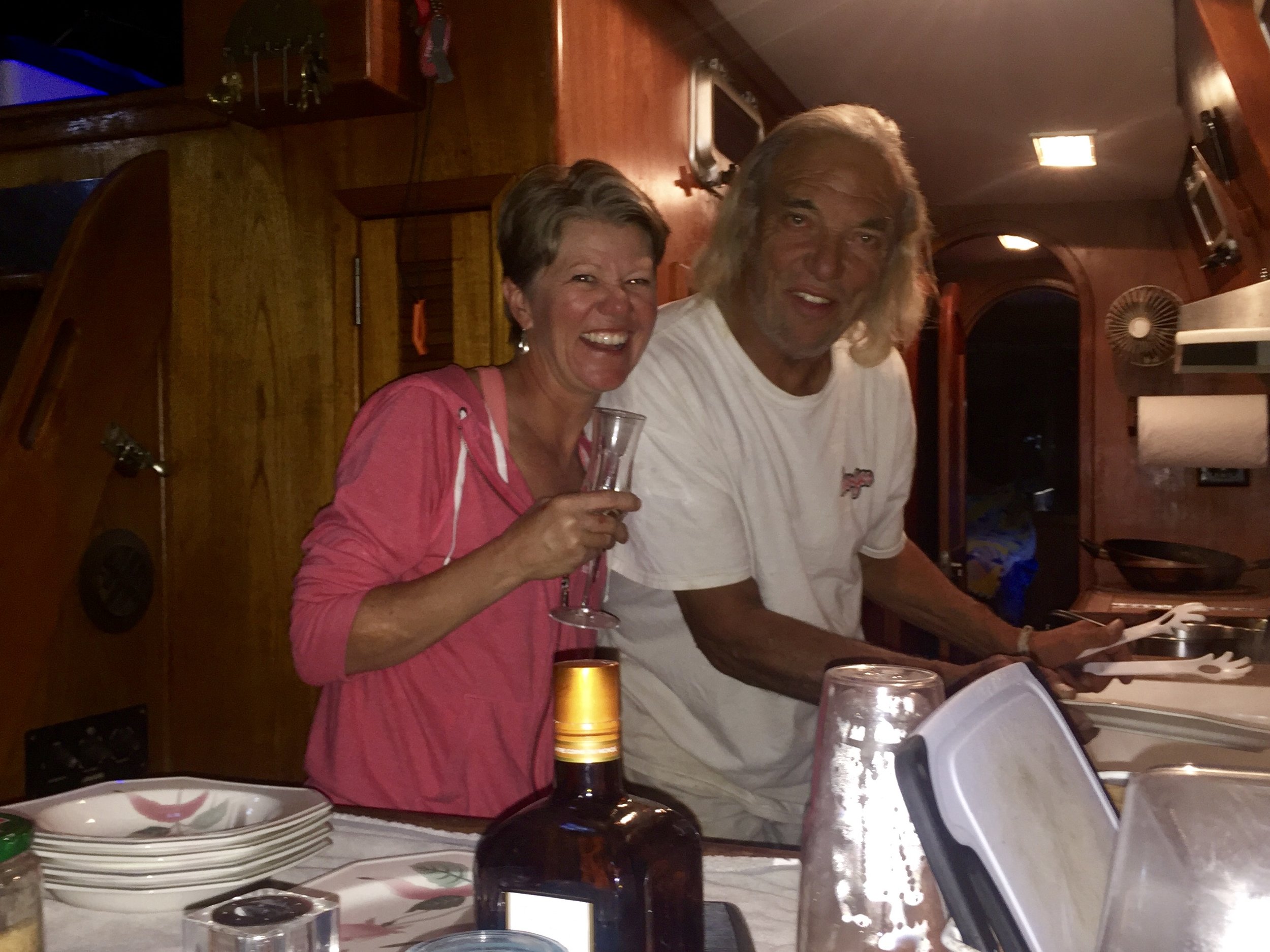 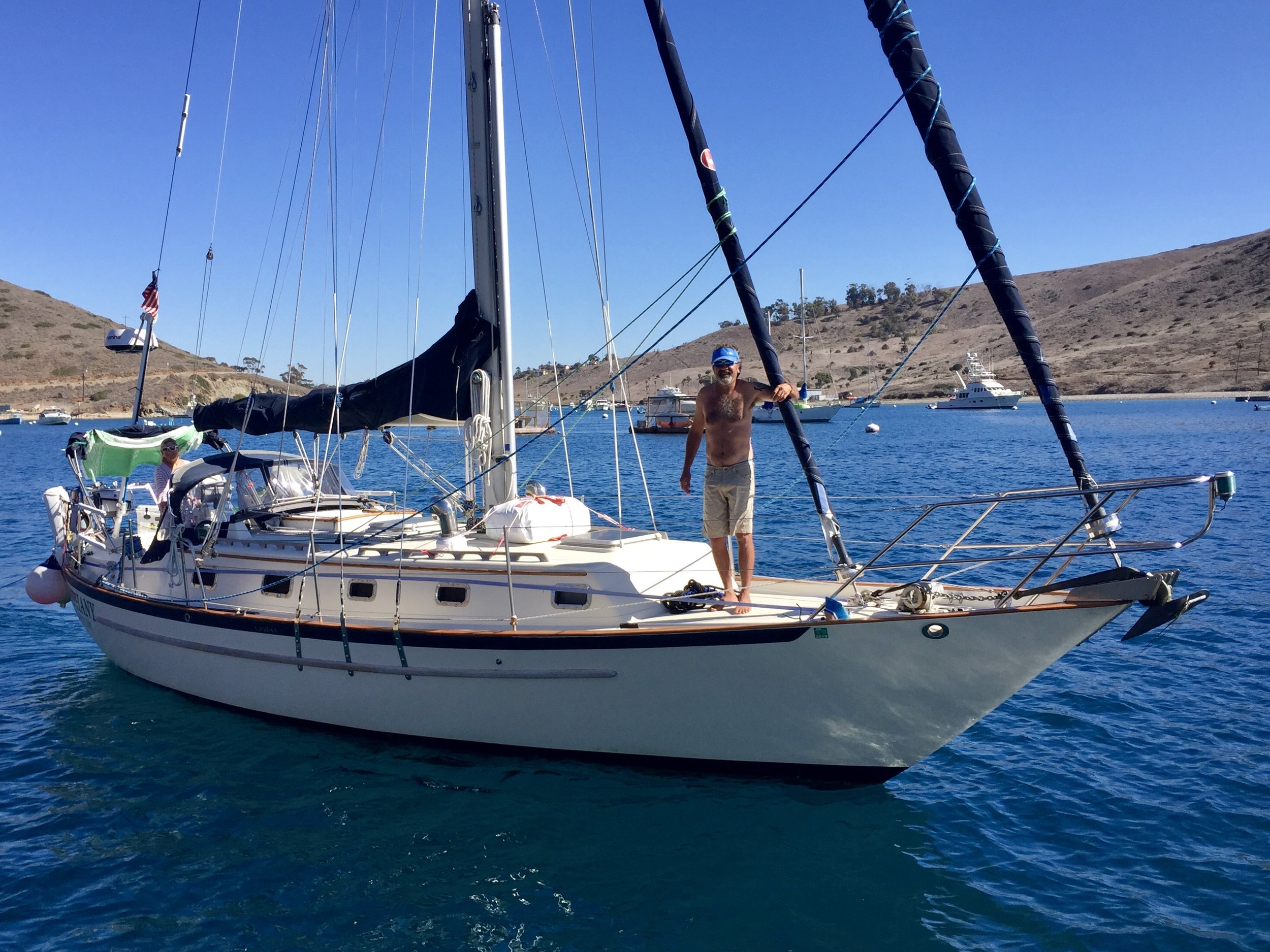 Bill and Julianne of SV Epiphany doing a drive by before heading south. 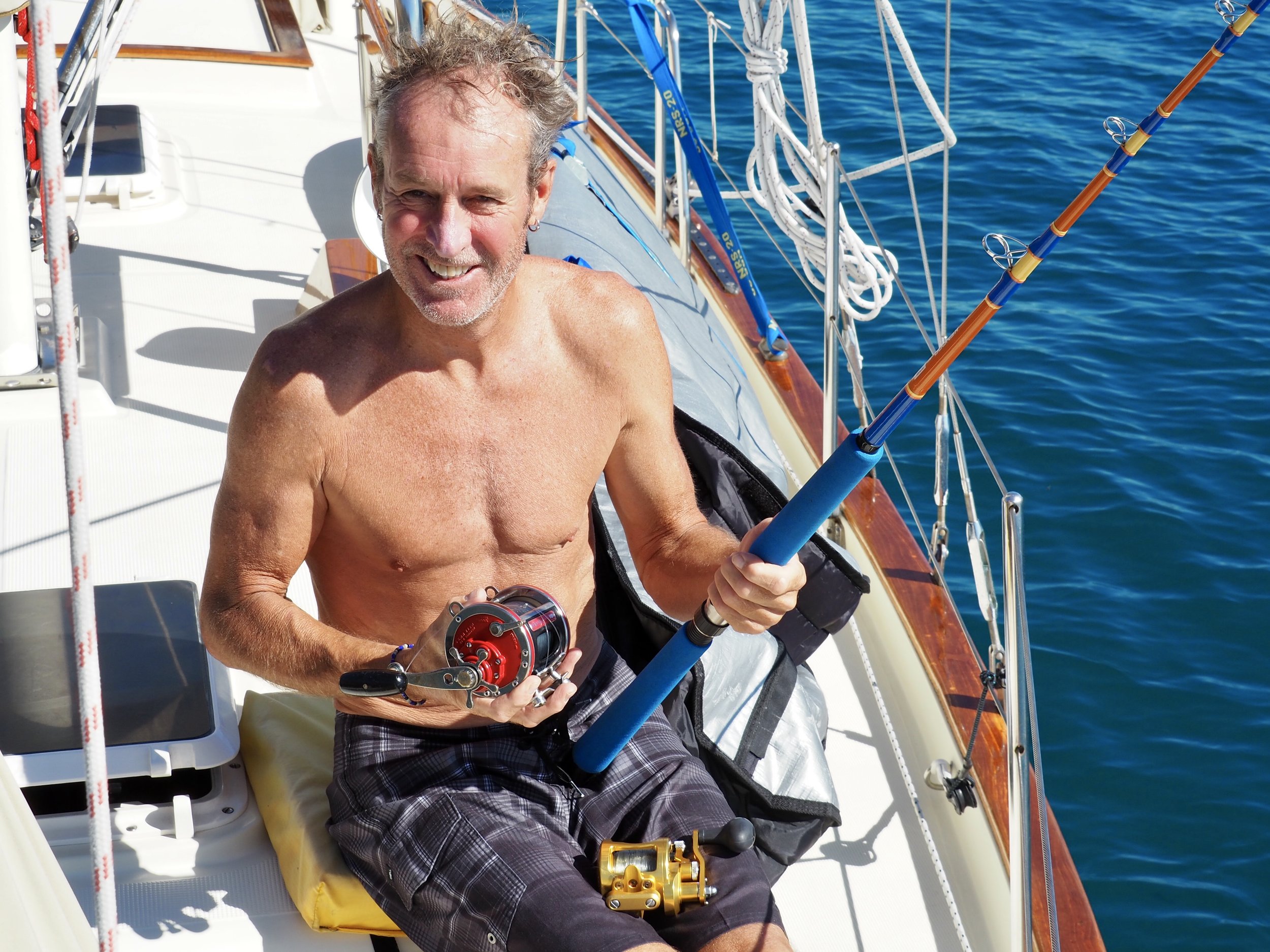 If you thought getting spooled by a great white might make this guy less likely to fish, you don’t know Colin. He went right out and got the reel they used in Jaws. My question: do I really want to be around for the outcome of this arms race? 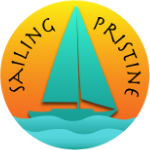