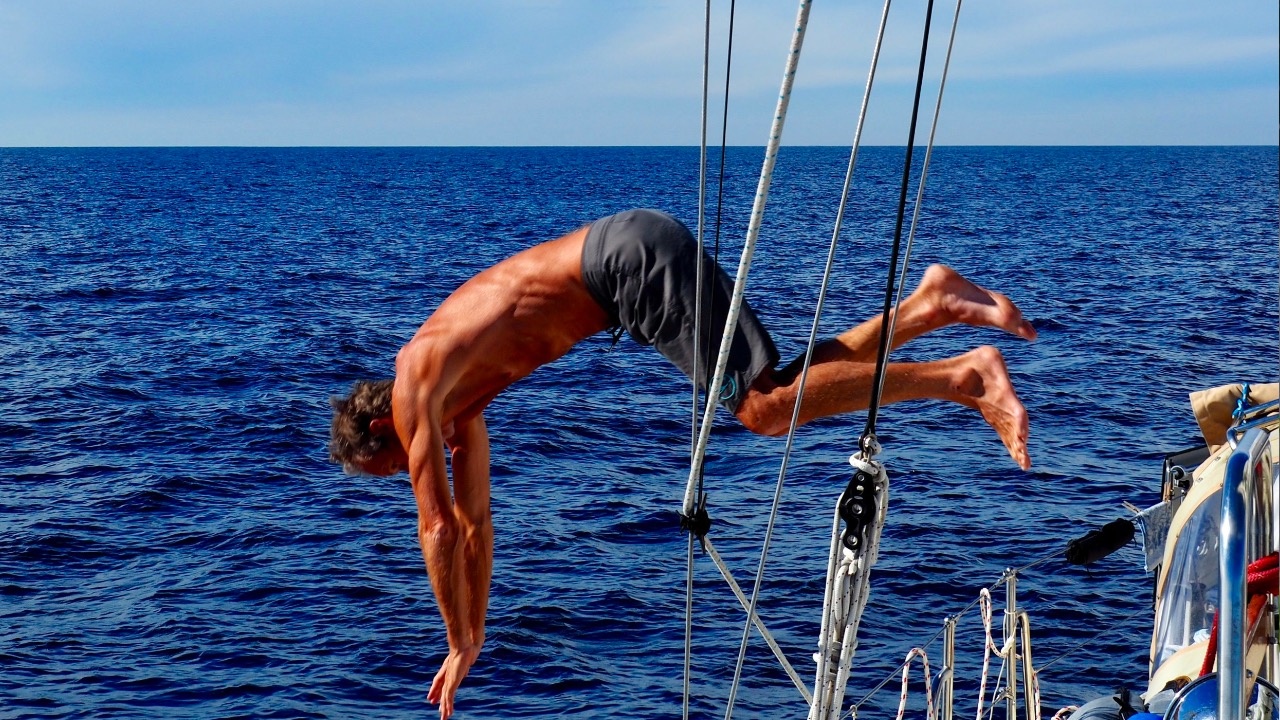 We weren’t exactly crossing the Pacific, but Colin and I were heading from Baja to Mazatlán, a journey of roughly 200 nautical miles across the Sea of Cortez. Depending on the winds, we’d be out of sight of land for 2-3 days. If anything went awry, we could be 100 miles away from a doctor, mechanic or trained masseuse. 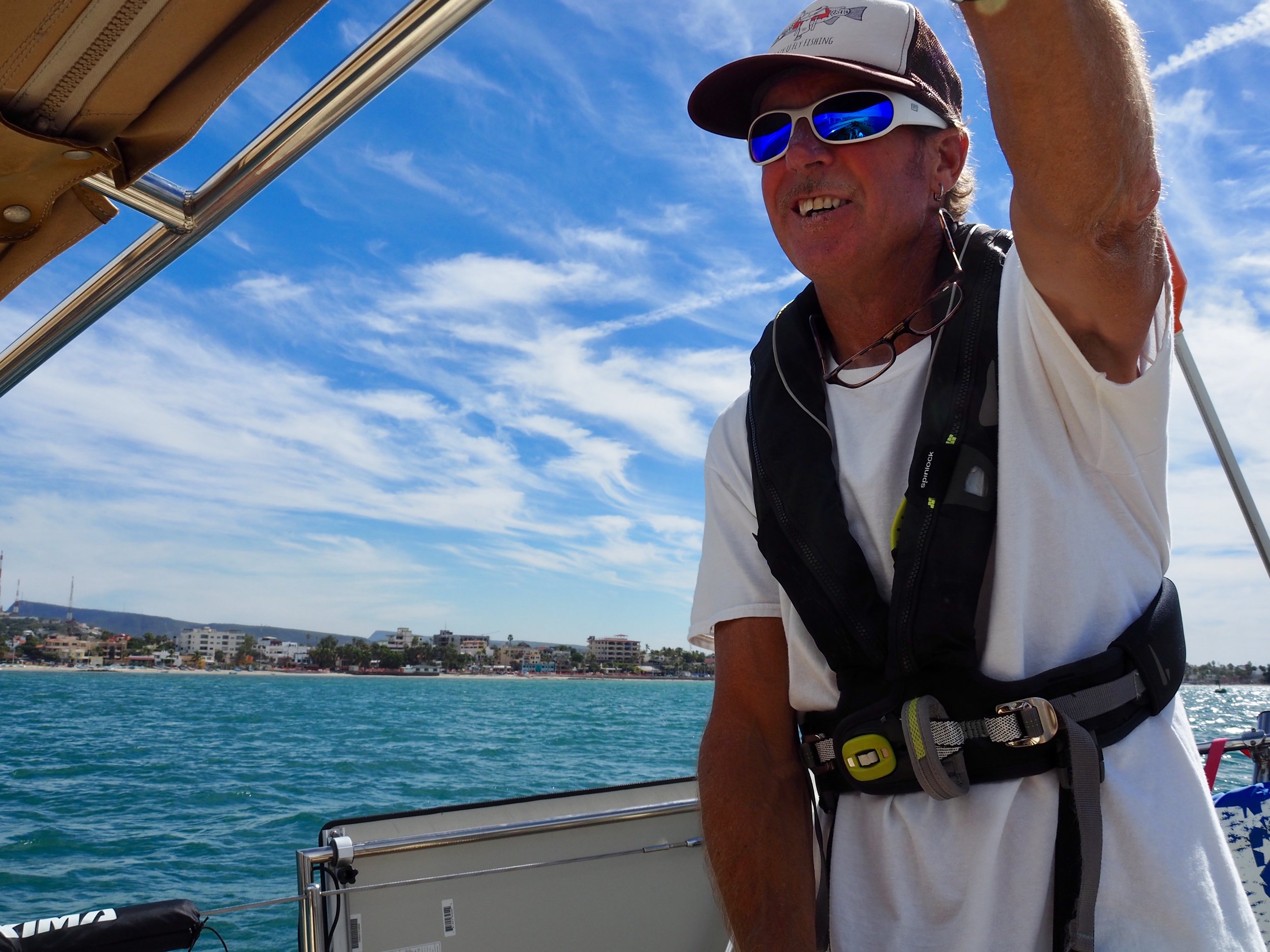 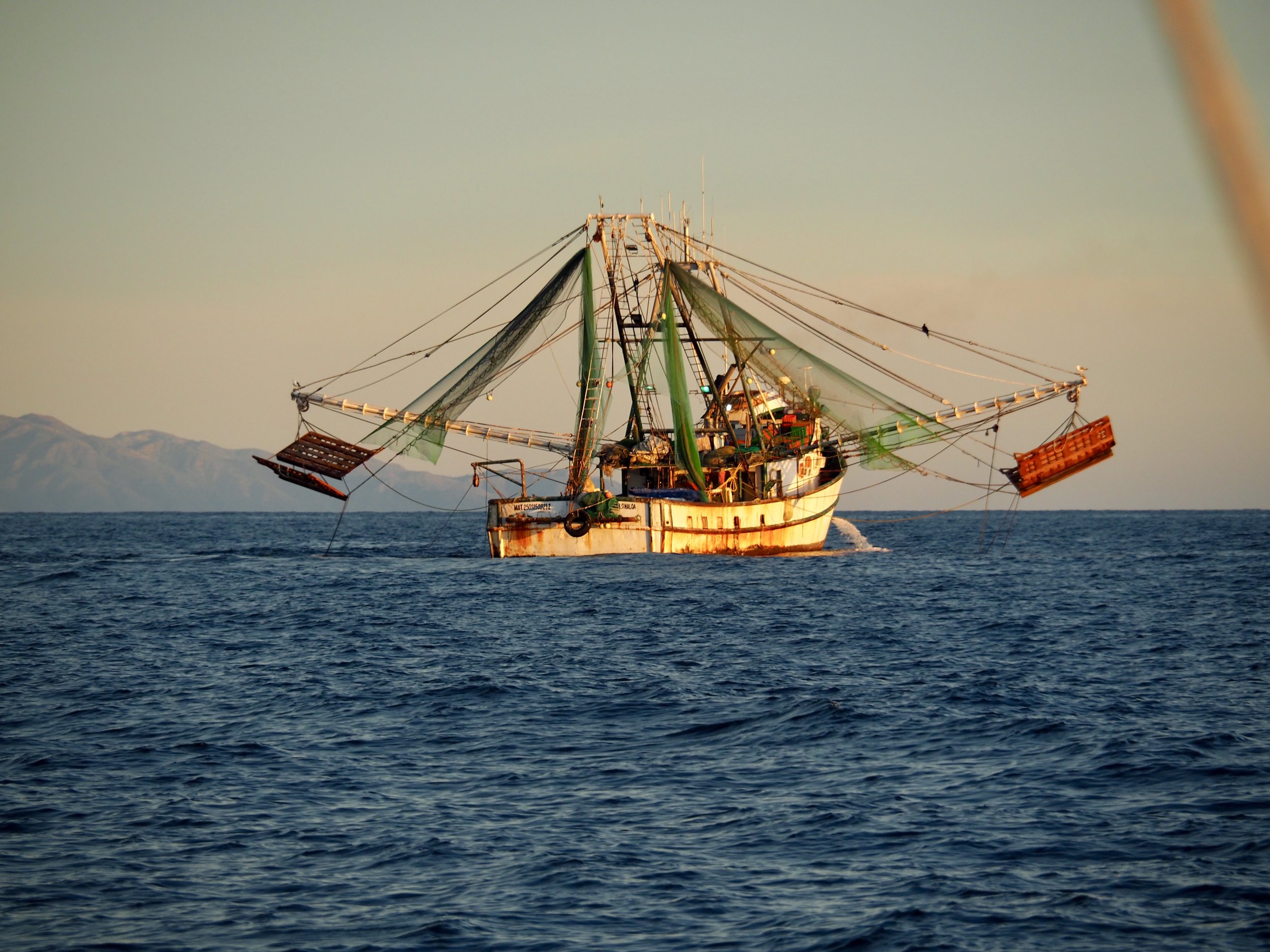 We had an EPIRB, sat phone, and life raft if things went completely sideways, but we were going to be more alone than we’d yet been on our journey and the word ‘vulnerable’ was top of mind.

This time of year, screaming northerly winds can easily bring 25-30 knots and punishing waves, so we patiently waited for a conservative weather window. 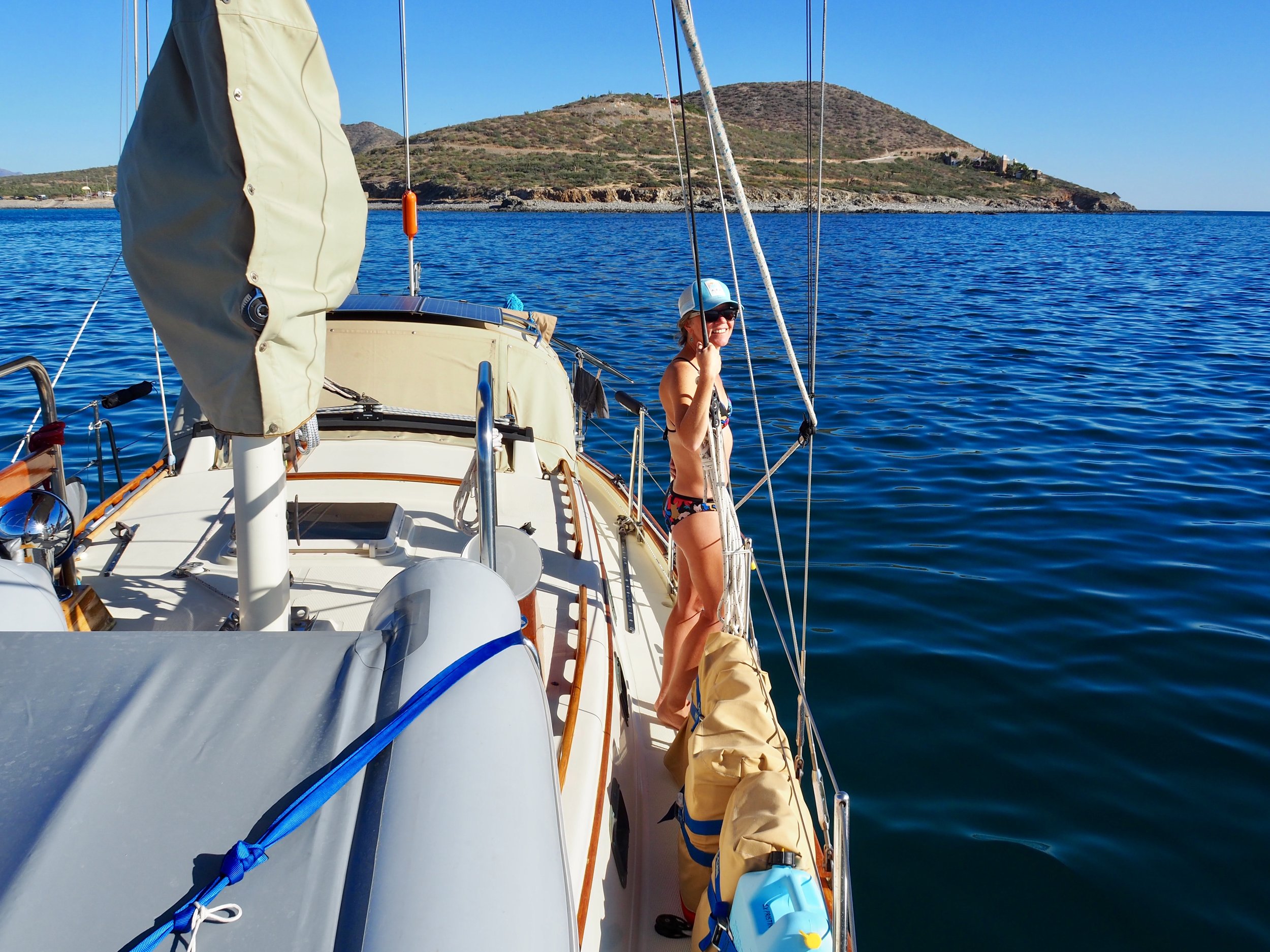 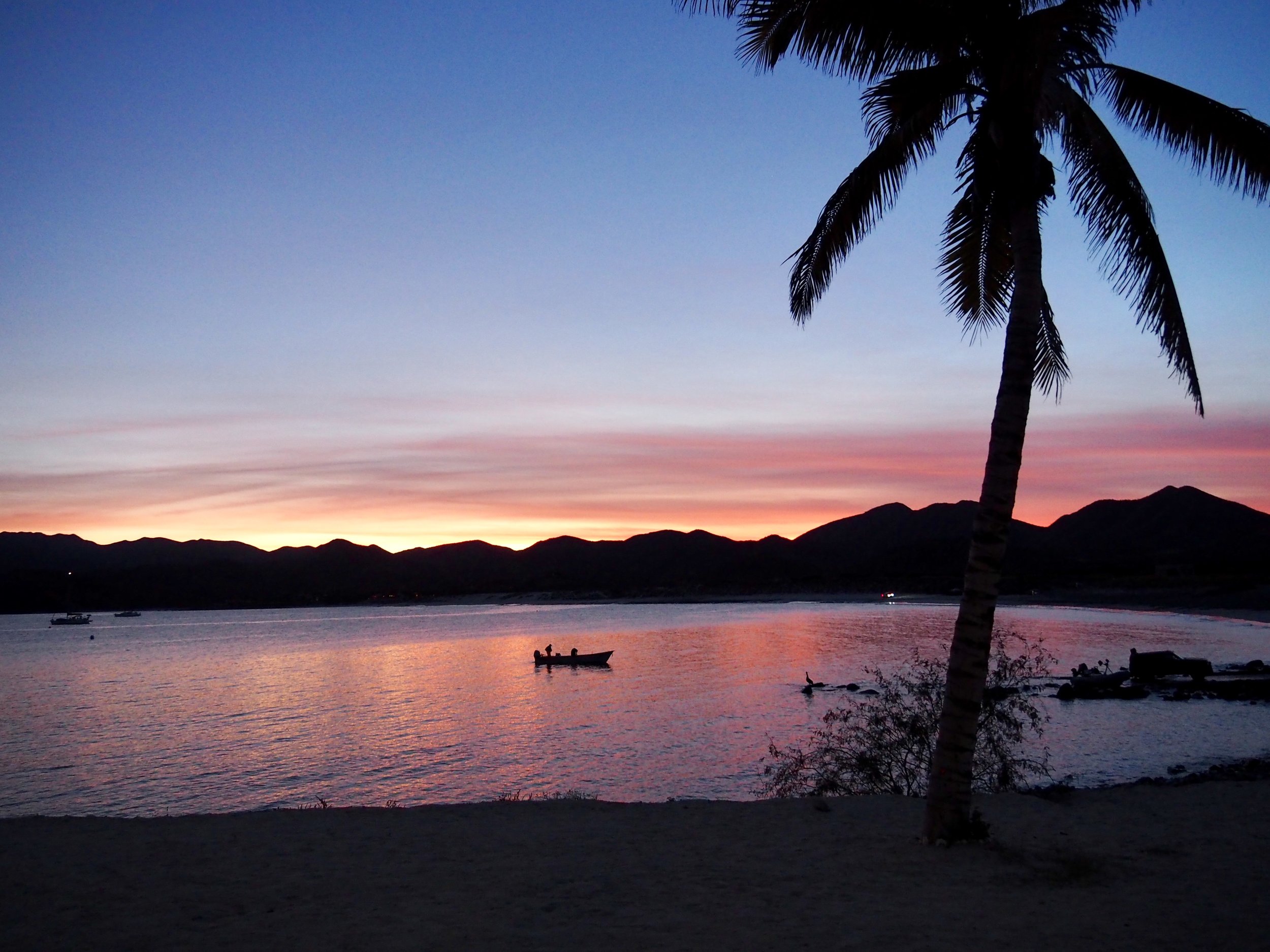 There are worse places to be stuck 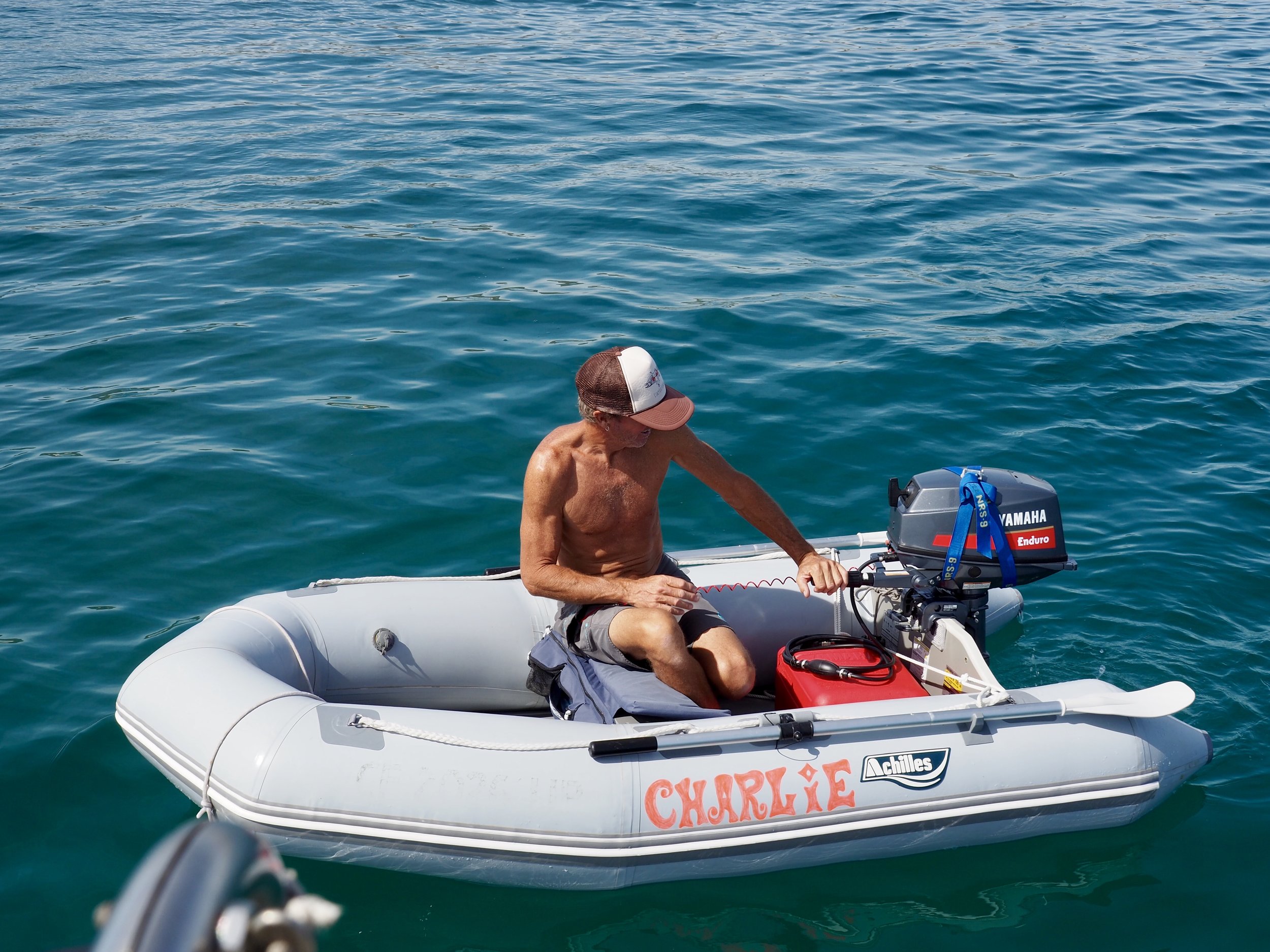 Thankfully, we hit the weather spot on. Our first day started with light winds that built to a beautiful 10 knot broad reach as we glided peacefully along a flat sea under full main and jib. We had our first sighting of a new (to us) marine mammal species when a pod of pantropical spotted dolphins came to play in our bow wake at dusk. And as the day gave rise to a clear, moon-less night, the sky felt alive with stars above and glowing bioluminescence below. It was the stuff sailing dreams are made of.

After dinner, we shifted into our watch schedule. First, I slept while Colin took the conn, then we switched. Eventually the wind died out as it often does overnight and we turned on the engine, motor sailing through the darkness. On watch, I tracked a cargo ship on AIS and stayed well out of its way. Otherwise, all was quiet until the Valrossa. AIS told me she was a 700-foot tanker who, in an hour or so, would pass within a few hundred feet of us on our present course—definitely too close for comfort in the dark. Boating rules of the road exist for every situation on the water, and in this case the boat on the right had the right of way. That boat was the Valrossa.

Thus, it was my responsibility to get out of her way, but the part I couldn’t work out was how. While most tankers speed along at 20 knots, this one barely seemed to move, yet her heading kept shifting as much as 30 degrees. While I pondered how to avoid a collision with a drunken, lumbering Chrysler Building in the pitch black, my watch ended and I passed the mystery to Colin.

I slept peacefully. Colin, also finding himself unable to solve the puzzle, picked up the radio and hailed the Valrossa. Apparently, a friendly captain answered immediately and—in perfect English—explained that the Valrossa was adrift. He confirmed they could see Pristine clearly on their AIS and gave Colin permission to cross his bow, so onward we steamed. What I loved about that encounter, when I got the download, was that it was completely natural: Two boat captains talked on the VHF to decide on a safe course of action. Yet it seemed pretty remarkable to me that a massive oil tanker was happy to chat with a tiny sailboat in the middle of the night, and even give her right of way.

When the sun rose, I made coffee, and we toasted being smack dab in the middle of the Sea of Cortez. The wind was too light to keep the main filled, so we dropped our last sail and motored under bare poles. That’s when Colin had an idea. We killed the engine and let Pristine drift to a stop in 2500 feet of depth.

It’s rare that your morning shower becomes a lifetime memory-maker. There was a sweet marble bath at a hotel in Munich. Once in Botswana, elephants watched me lather up in a structure that provided privacy from humans but gave nature the full-frontal. To that handful of memories, I can now gratefully add leaping into the wide-open sea, savoring crystal clear visibility, as I swam in a 200-mile bathtub. 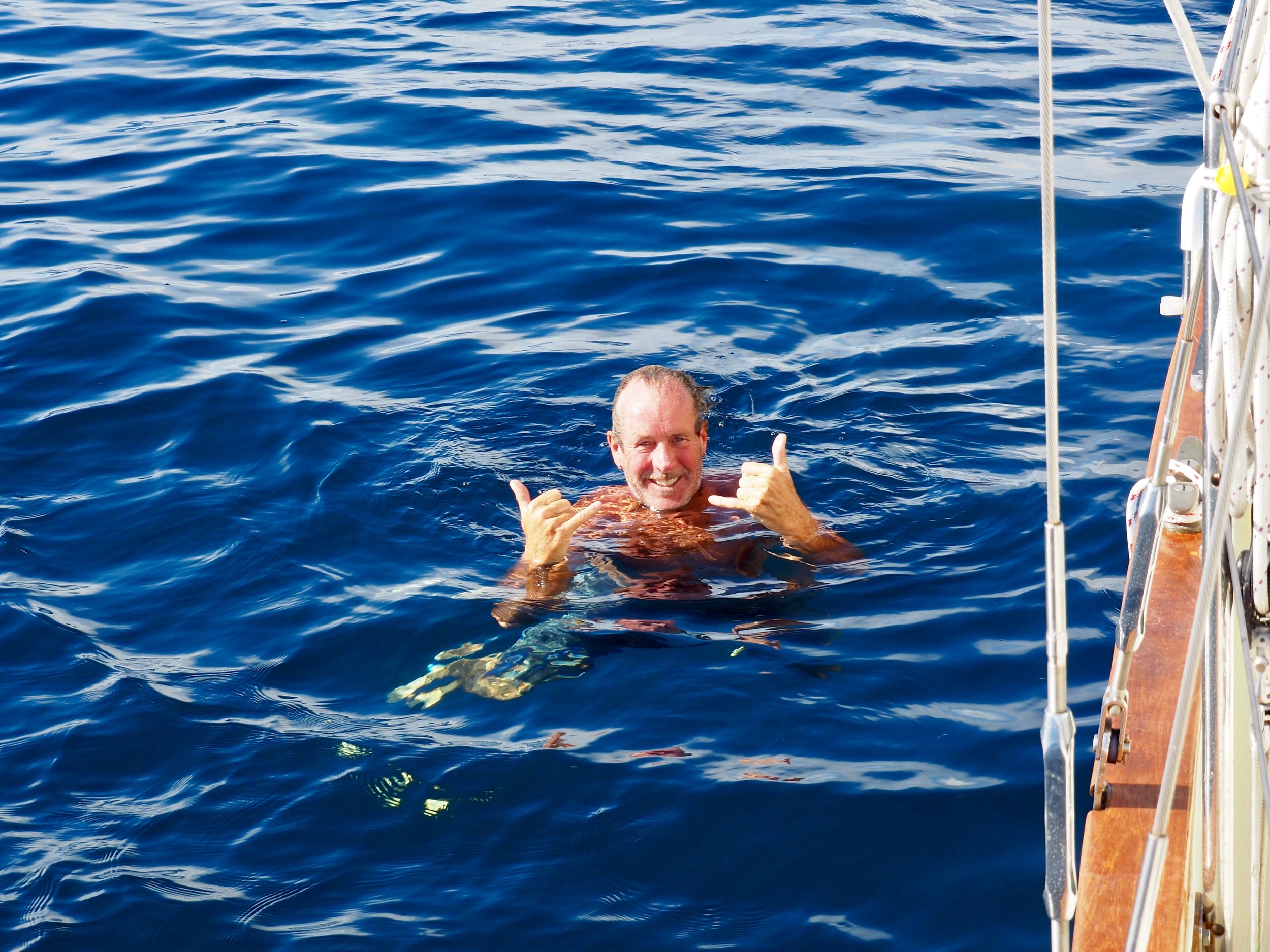 Best. Shower. Ever. Colin gets his stoke on in 2500 feet of deep blue.

When the wind picked up, we climbed back aboard, gave ourselves a spritz of fresh water, unfurled the jib, and our slow but glorious broad reach continued. We ate yogurt for breakfast, salads for lunch and arroz con pollo for dinner. We read books and fished and found ourselves mesmerized by the peaceful undulations of the wind-vane, the sails, and the sea. It was too beautiful to speed our progress with a hammering motor, so we let the wind push us along, slow enough that we knew we’d spend a second night at sea. It was well worth a little less sleep. 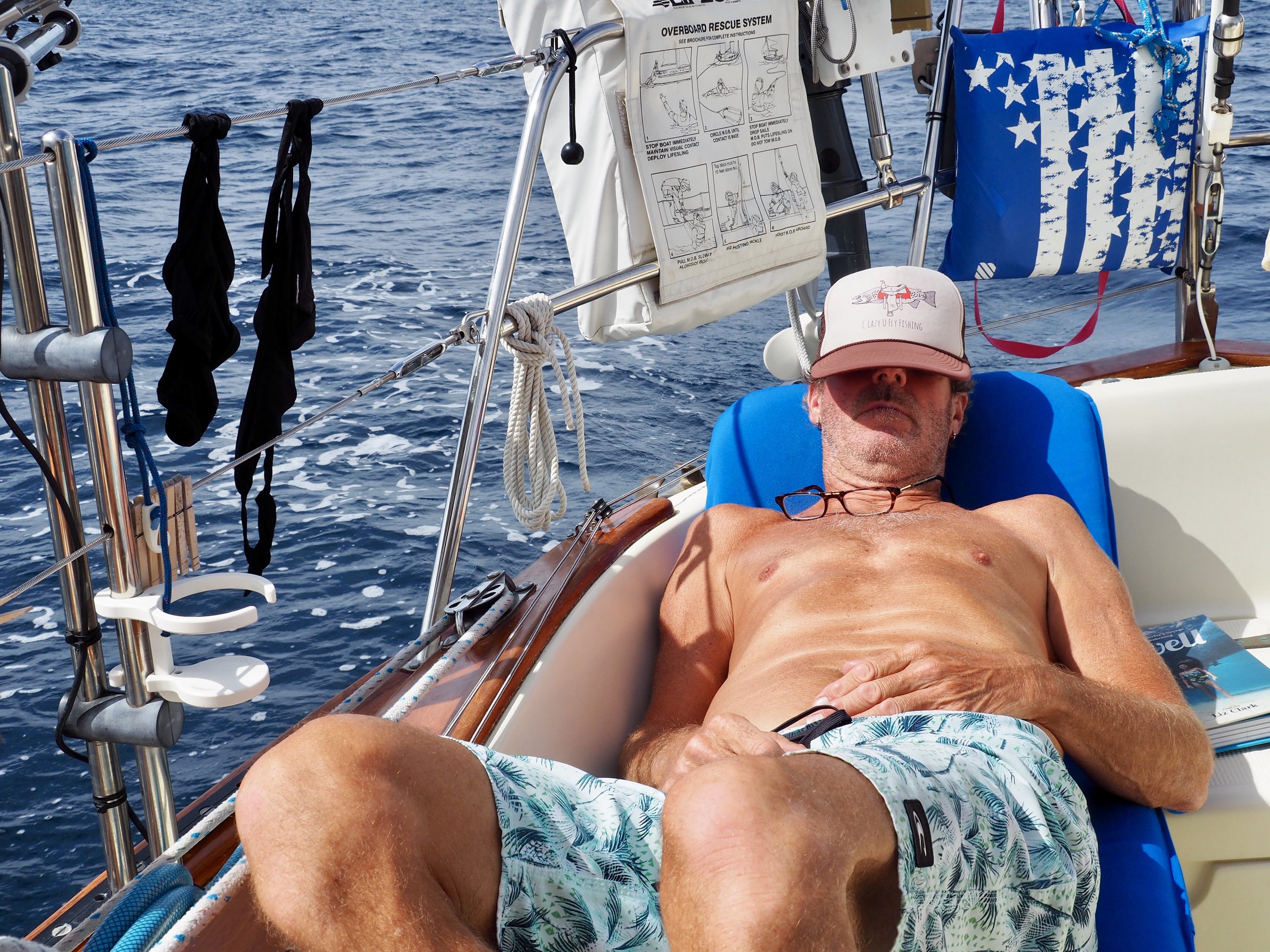 This was our pace through most of the crossing 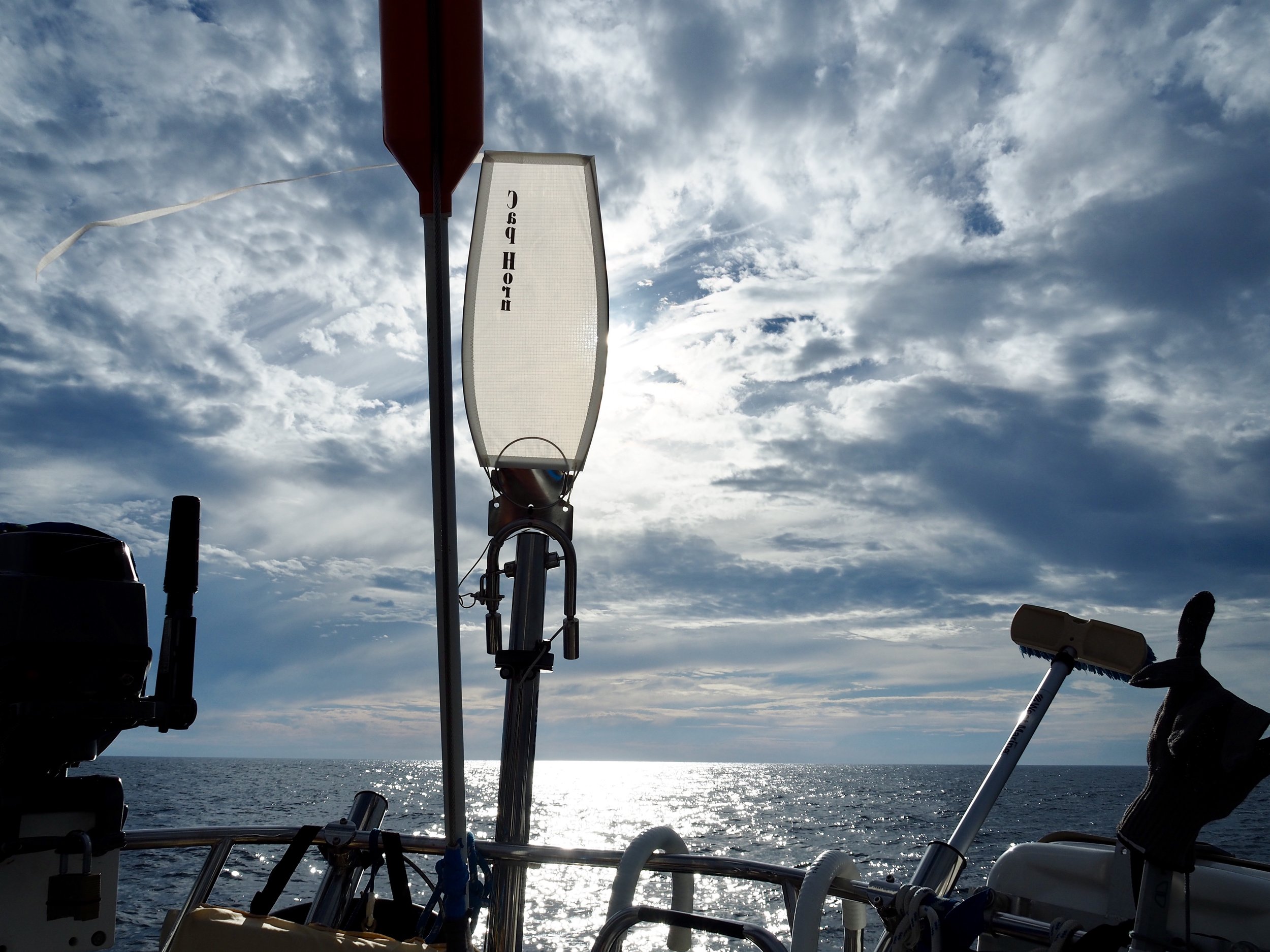 Meet our third crew member, a wind-vane named Cape Horn, that we affectionately refer to as the Ho. Some folks we raced with in San Francisco will understand how that name came about and why it’s in honor of a boat called Jane Doe—especially if they know we named our electric autopilot the Hog, honoring Heart of Gold and a couple of skippers who became incredibly dear to our hearts.

Late that night, as I took over watch, Colin told me we’d had some gusty wind shifts and a few flashes of lightning. “Ok,” I said, my sleepy brain not putting the pieces together. Shifts in wind direction and velocity often mean a squall, even without a dead giveaway like lightning. But with so much else to learn about weather, I’d set aside a more detailed study of squalls, thinking I wouldn’t need that knowledge until we reached the tropics. Um, Cheyenne? Mainland Mexico IS the tropics.

I’d handed Colin the Valrossa challenge on his watch, and he returned the favor with a midnight squall. Within minutes I’d ticked off fifteen lightning flashes in the logbook and the wind died altogether, meaning the sucker was right on top of us. I turned on the motor and was furling in the jib when a bleary-eyed Colin poked his head out, curious how the perfect sailing conditions he’d left me had disappeared so fast, but the atmospheric strobe light answered his question before I could open my mouth. We spent the next couple hours ignoring our course line and driving in circles, searching for stars to get us out from under mother nature’s display of force.

Like all conditions in sailing, though, this one eventually passed and as the dawn broke, the wind returned, giving us a beautiful broad reach all the way into Mazatlán, complete with whales breaching and frigate birds circling. After some of our harrier passages along the Pacific Coast of Baja, we were finally rewarded with this near perfect crossing of our beloved new sea. 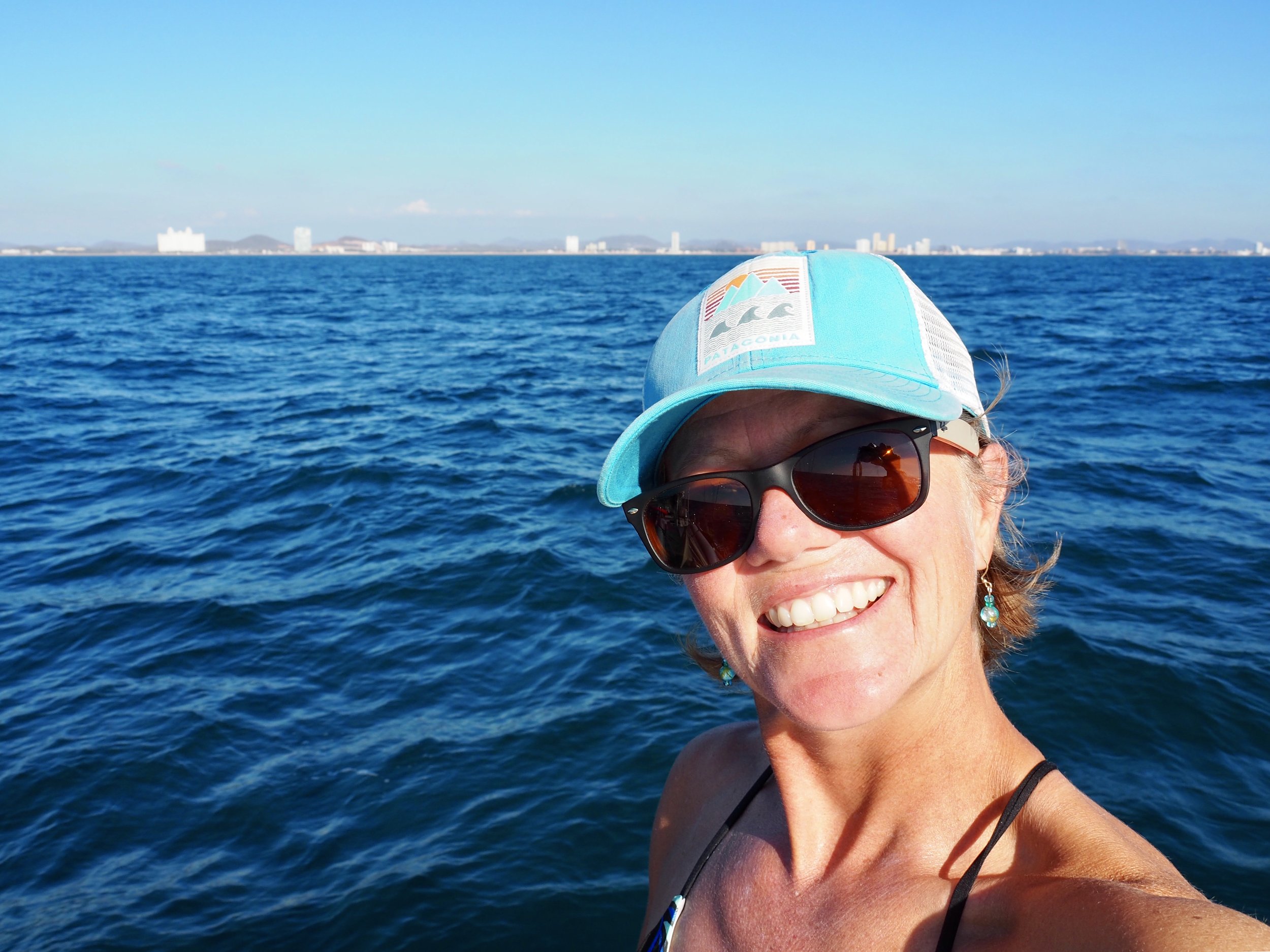 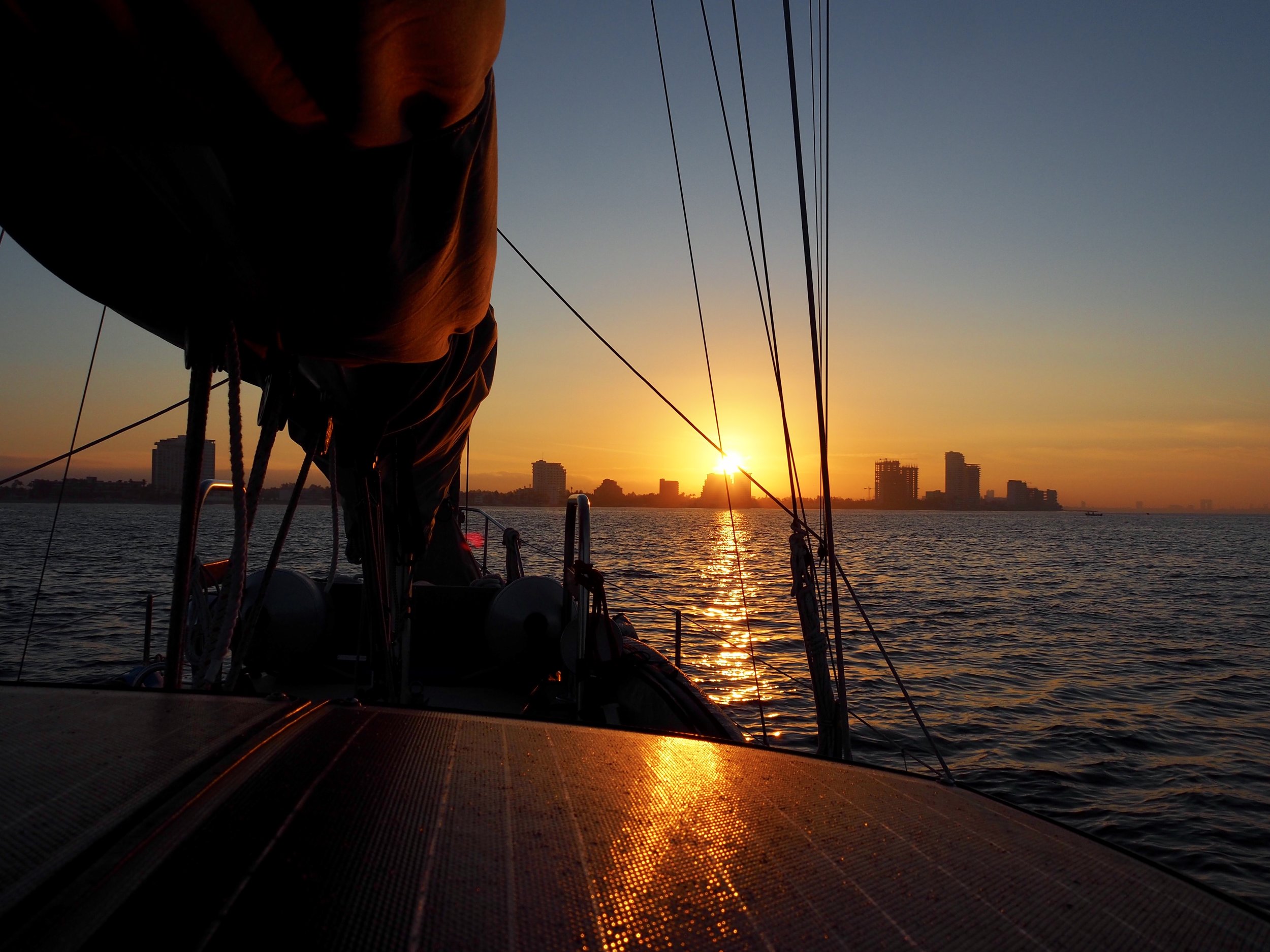 With settled weather, this was a perfect place for us to spend two days catching up on sleep and mentally preparing to be surrounded by humans again. We swam, read, slept, meditated, cleaned Pristine’s bottom, played guitar and ate the last of our fresh produce.

Then we threw all that healthy stuff aside and entered Mazatlan proper for a magical week of food, music, architecture, history and new friends. 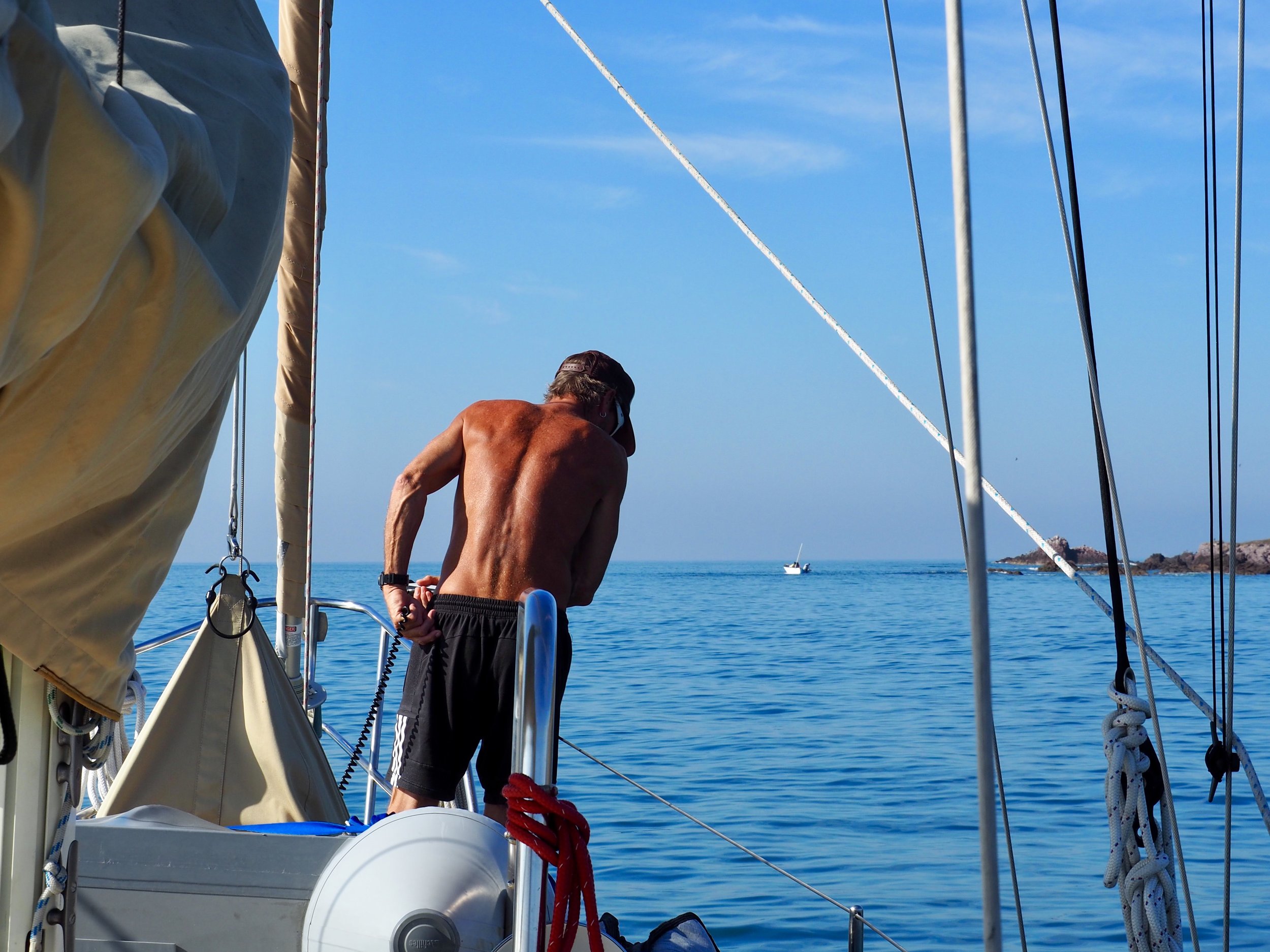 More on that adventure next time.